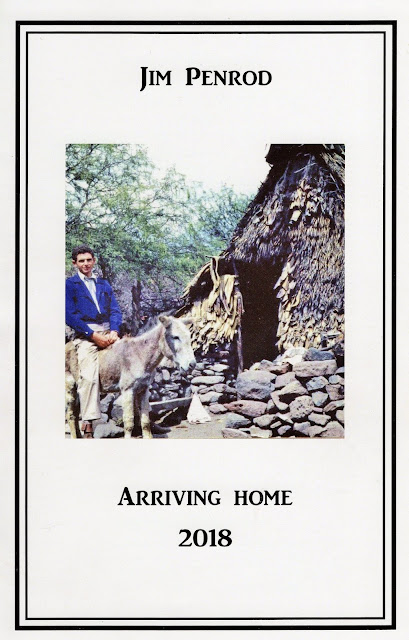 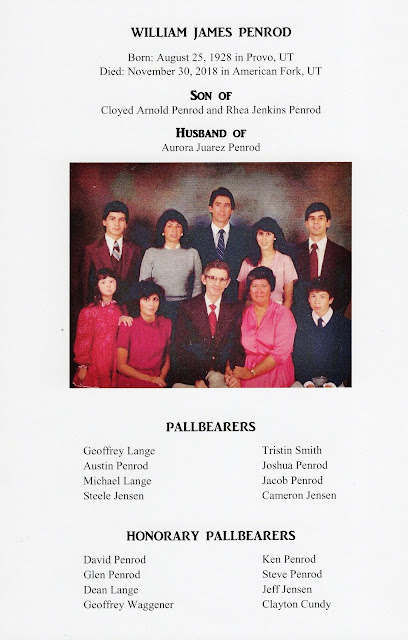 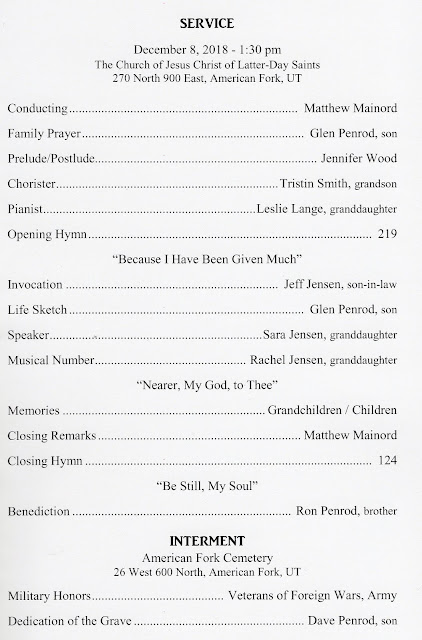 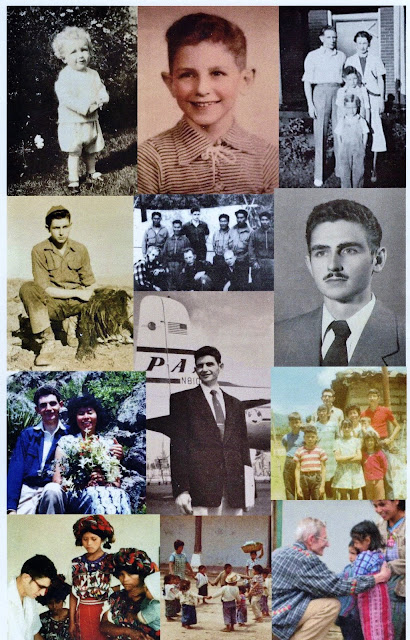 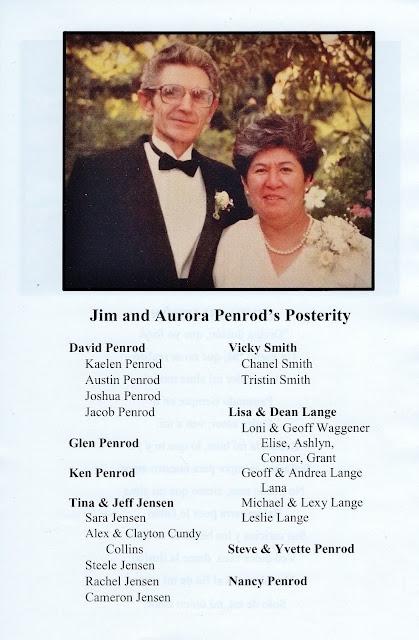 In mid-summer 2018 I began making frequent visits with Jim.  Sometimes I would hike up to their place in American Fork on my daily hike with backpack--I do to try and keep in shape and live long enough to get my tasks completed.  In the middle of those visits Jim celebrated his 90th birthday. 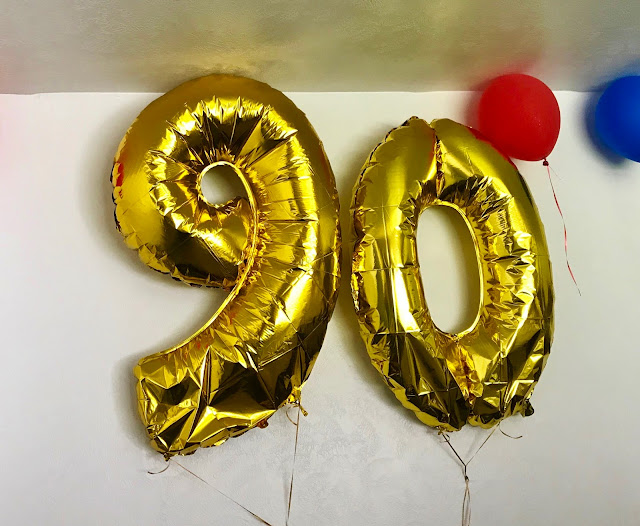 I loved my visits with this old friend from clear back in 1959 when I married Aurora's cousin, Maria.
Maria had grown up in Aurora's home in Tierra Blanca, Veracruz, Mexico, so they were more like sisters, than cousins. Below the Saints from the Tierra Blanca LDS Branch. 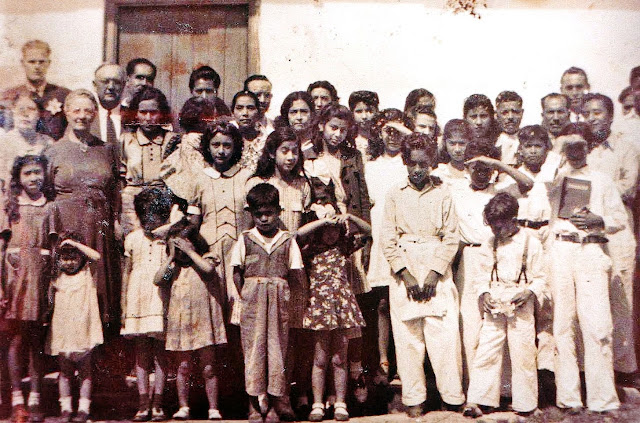 Jim had met Aurora as an LDS missionary in Mexico, and then they met again at BYU and were married.  We had very important mutual friends, probably the most important being Harold Brown, who had been a young missionary in Tierra Blanca, and many years later  an LDS Regional Representative over our area in Guatemala when he became the most key friend during all my years living and working in Guatemala. NOTE:  He is the tall gringo in the upper left of this picture of the Tierra Blanca LDS Branch.
But, back in 1967 when me and my family were preparing to move to Guatemala, Jim was the person who was most interested in what we were going to attempt, as his interest in the people of Mexico and Guatemala was deep felt.  I kept him informed about our struggles to get to Guatemala in 1967, and establish ourselves there with an agro-business that would support us, while at the same time be a place where we went to work with a plan to give significant help to a very needy people.
So, it was no surprise by 1968 to have Jim become our first visitor.  He wanted to join our effort, but we were struggling to learn and to achieve self-sufficiency, so we were in no position to ask anyone to gamble joining  us, but rather suggested that he contact a group of people who were organizing to begin their own effort to help the Mayan people--AYUDA Inc.,  organization headed by Dr. Mel Lyman, Dr. Harris Done and others.
That resulted in Jim, and Aurora along with several children, becoming the pioneers to begin AYUDA's work in Guatemala.
By 1969 they were in Guatemala, AYUDA attempting to establish their project in Momostenango, in the Central Highlands.  As soon as we heard they were there we made the long trip to visit and see how we could help.  I recall vividly one of Jim's real problems--getting used to and coping with fleas. He had tried to solve the problem by having inside the cuff of his pants, a hidden--what I like to call a choker, with an elastic band around his ankle to stop the fleas from getting up his legs.  I suggested one of my solutions, using OKO, an aerosol insecticide, preferring to risk the toxin, to being eaten alive and sucked dry of my blood by the little buggers!
But, there were problems in Momostenango, like of a political nature, and AYUDA wasn't welcome, so from one day to the next, the Penrods, along with Dr. Lyman, and I believe a nurse, moved quickly to an even more isolated area, where Rafael Castillo, a graduate of BYU,  (with an engineering business and becoming deeply involved as an important politician in Guatemala), had offered AYUDA the use of his family home in far off Cunen, Department of          Quiche, which was one of my Cine Chapinlandia (traveling movie) towns. 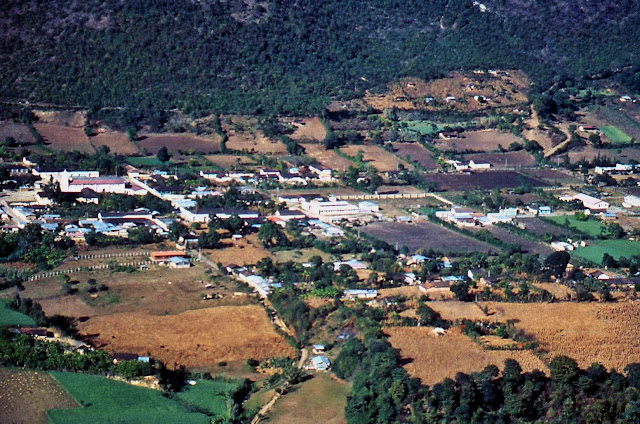 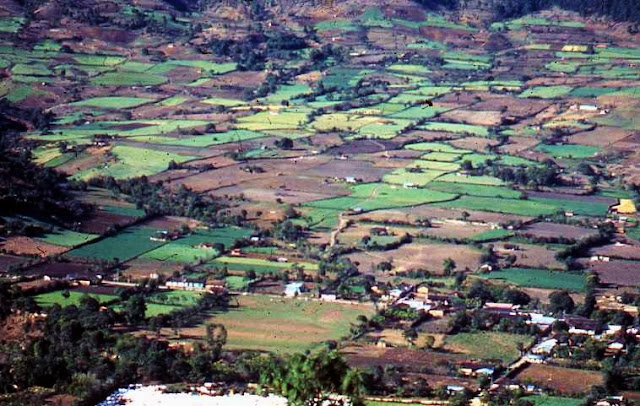 So, in spite of Aurora expecting any day an addition to the family,  from one day to the next they were in Cunen, you see above in a couple of pictures. A small town in a high mountain valley over 6,000 feet in elevation, and many miles from any medical facilities.  It was soon after that the baby was to come.  They couldn't get to a hospital as heavy rains had washed out roads, or bridges, and they were isolated.  Dr. Lyman, a dentist, aided in the birth….I believe of Glen.
Jim was exactly where he wanted to be, and where….I guess we can say, he was born to be--A PIONEER,  in an area where initially there was no electricity (we had to use a portable generator to show our movies there).  They went to work, and over the next 18 months, aided AYUDA in its dental and medical mission. 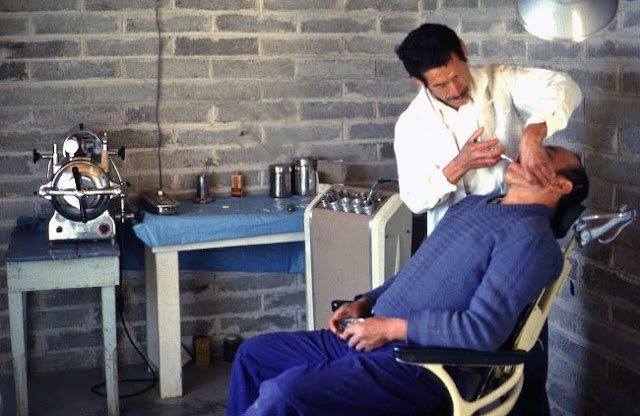 Then they took initiative to work on projects that would be permanent solutions on a never ending basis--EDUCATION.  Jim was instrumental in expanding the elementary level education, to include the Junior High level. 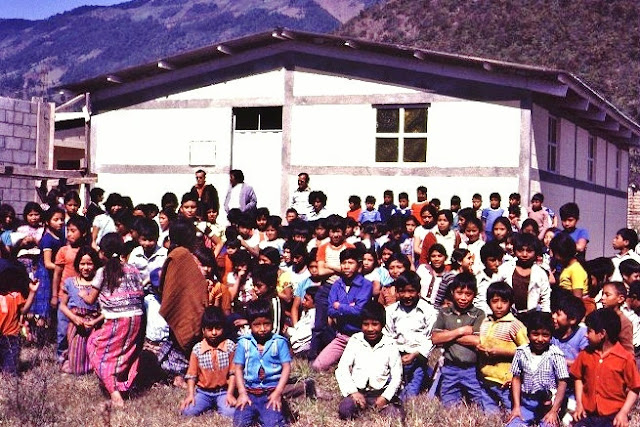 Aurora went to work establishing 10 small neighborhood pre-school classes, using young people as the teachers, graduates of the elementary level--who wanted to continue their education in junior high but needed scholarship help.  So in compensation for them teaching the "little schools," seen below, they were given help to continue their education. 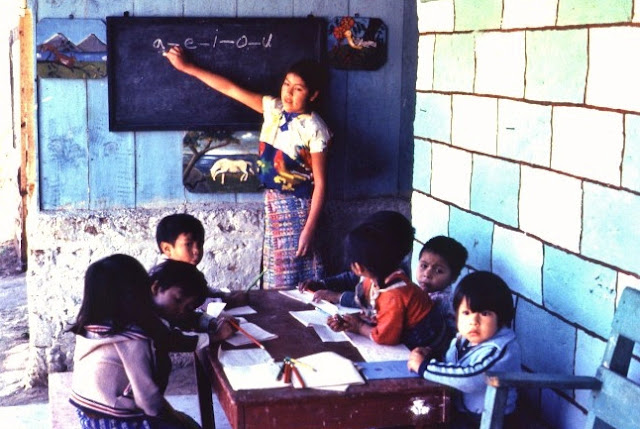 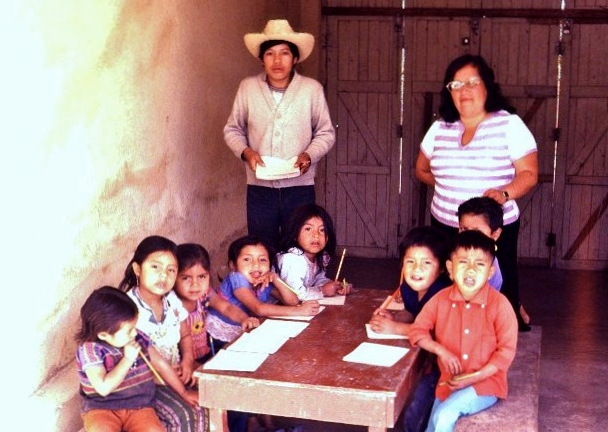 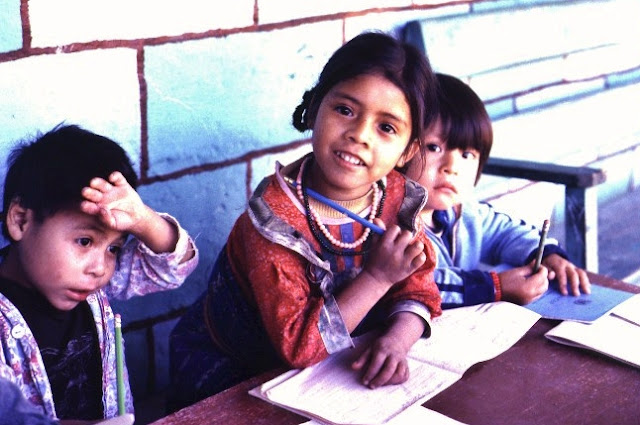 The Penrods dedicated 18 months in Cunen, then he  and family  returned to Utah, but his heart was in Guatemala, keeping in contact with the people, helping all he could, and from time to time visiting us, as you see in the picture below. 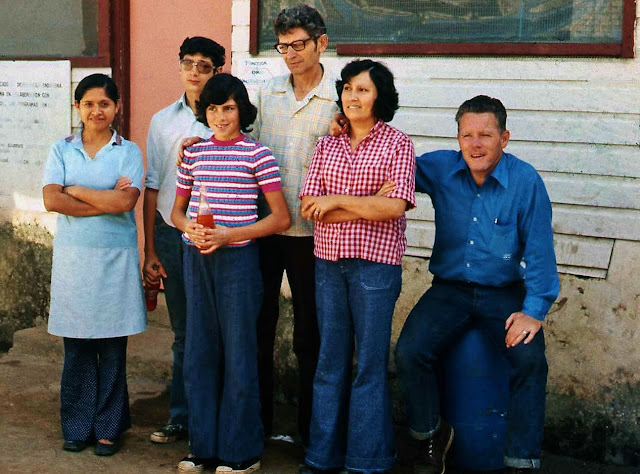 You see in the picture, along with Jim and couple of his kids, Maria and me, and on the left a young lady from Cunen, Florencia Rivas.  She had need of sort of escaping from Cunen, and Jim brought her to us.  With us, Florencia got involved in our educational system, but most importantly became the Supervisor of the Central House Family, with orphan and needy children, abandoned and needy mothers and children, vocational students, U.S. & Guatemalan volunteers, sick people in intensive care, etc.--the numbers varying from 30 to 50 in the family.  Florencia was a key person in everything we did, thanks to Jim.
The above picture must have been taken the day before the GREAT EARTHQUAKE, in February 1976 that killed 25,000 Guatemalans.
We had another visitor on that tragic day.  Dr. Buz Sandburg from Salt Lake City. we see below greeting some of the workers from the  Valparaiso Plantation. 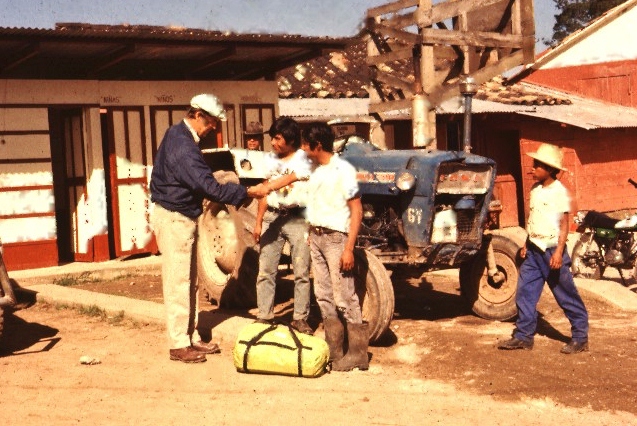 Buz was sleeping in the Central House when at 3:00 AM the earthquake it.  He didn't know, as Guatemalans do, that with an earthquake you get outside QUICK!  He rather rolled over, pulled the blanket over him, being peppered by plaster from the walls, but was alright.
Jim and kids were sleeping in their van, and didn't even wake up until hearing all the noise from the people from the Central House huddled around outside wrapped in their blankets.  So they apparently were sound sleepers and missed the earthquake.
I encouraged Jim in my 2018 visits to get his history written down, but he didn't think he had the talent to do that--or the time.  He suggested I do it, and once some of my projects are completed I'll have to visit with Aurora and kids to get the information to do that.  But the point here is that they gave their all for 18 months to get AYUDA's project going--a program that continued up into the dangerous period of guerrilla war in 1981 when AYUDA's personnel didn't want to go to Guatemala anymore.

At that point I became associated with AYUDA as their representative, and took charge of a Credit Cooperative in Patzicia, established by AYUDA and Dan Noorlander, as well as the projects in Cunen.  Soon afterwards AYUDA sort of disappeared, and me and the Foundation for Indian Development (at the end called the GUATEMALAN FOUNDATION), took over and kept Jim and Aurora's projects going  in Cunen  for the next 10 years. Jim also was financially helpful in aiding us  do that--right up to the end.
I deeply loved, admired  and respected Jim as a friend, a brother, and mutual pioneer in our efforts to extend help to a wonderful, and worthy people. His encouragement and support was deeply appreciated and crucial over all these years to finally make possible us completing our GOLDEN ANNIVERSARY in 2017 when I retired the Foundation.  Let me just conclude with my comments made on the Mortuary's website:
"I am saddened that Jim has left us, yet happy as his suffering is over and he is certainly in a good place as he, foremost among all my friends, was a "good and faithful servant." He and family joined me and mine as pioneers in Guatemala, dedicated to doing all he and family could to help a humble, worthy and "people of destiny" among the Mayans. They did as few if any were willing to do--go into a remote area--Cunen, and for 18 months gave their all setting the foundation for wonderful progress and developments with far reaching consequences that daily are multiplying today--blessing the lives of many thousands--and they will continue to multiply on into the eternities. Nobody paid him to go, nobody gave them a living allowance or any earthly benefits--what he and family did was done out of pure love--love of Christ, and love for his fellow Mayan brothers and sisters. My friendship with Jim and our association over more than 60 years has been one of the great blessings of my life, and I look forward to happily meeting again, and pray that the loving comfort of the Lord will be with Aurora & family."
With lots of love & admiration, CORDELL M ANDERSEN

Posted by Guatemalan Foundation at 11:12 AM 1 comments