Dr. George Pingree's Passing and YouTube Videos #19 and #20 reporting on the Patzicia School--Julie Classroom and Dr. Pingree and his Funeral Service

SCROLL DOWN FOR LINKS TO Dr. George Pingree's obituary and related YouTube videos and other links:

GUATEMALAN FOUNDATION trustee, Toby Pingree's funeral remarks adding to his obituary a description of
"....the peak of George's generosity."

"Probably the peak of George's generosity was when, with his partner in medical practice--Louis Petersen, he contributed the optical shop (Cottonwood Optical) associated with the medical practice, to a foundation in Guatemala called then The Foundation for Indian Development, now the Guatemalan Foundation, that sponsors schools in Guatemala where there are none, pays for medical care, and emergency needs of the people who can't get it anywhere else.
"For 10 years the funds from that sale supported a school in Patzicia that has graduated over 1,400 people of high caliber--physicians, lawyers, doctors, veterinarians, teachers, and more.
"After the funds from the sale of the optical shop had been exhausted George continued to make personal contributions to the foundation up until the last one which was received just prior to his passing.  George was truly my brother.  For all these years we never had a fight, never had any problems.  We love each other and I'm proud to be his brother.  I say these things in the name of Jesus Christ. Amen."

SCROLL DOWN FOR LARGE VERSION 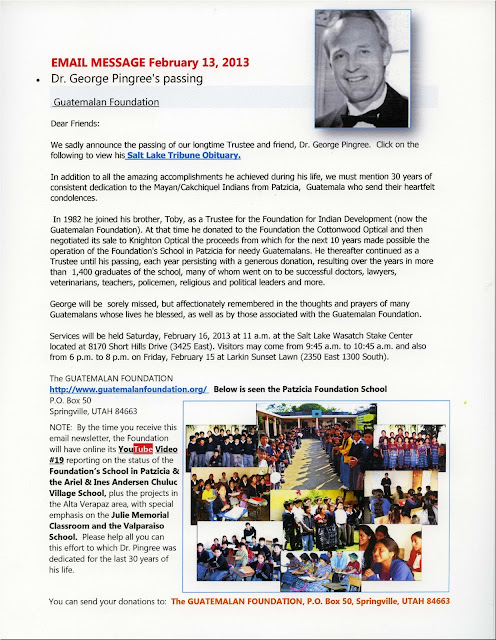 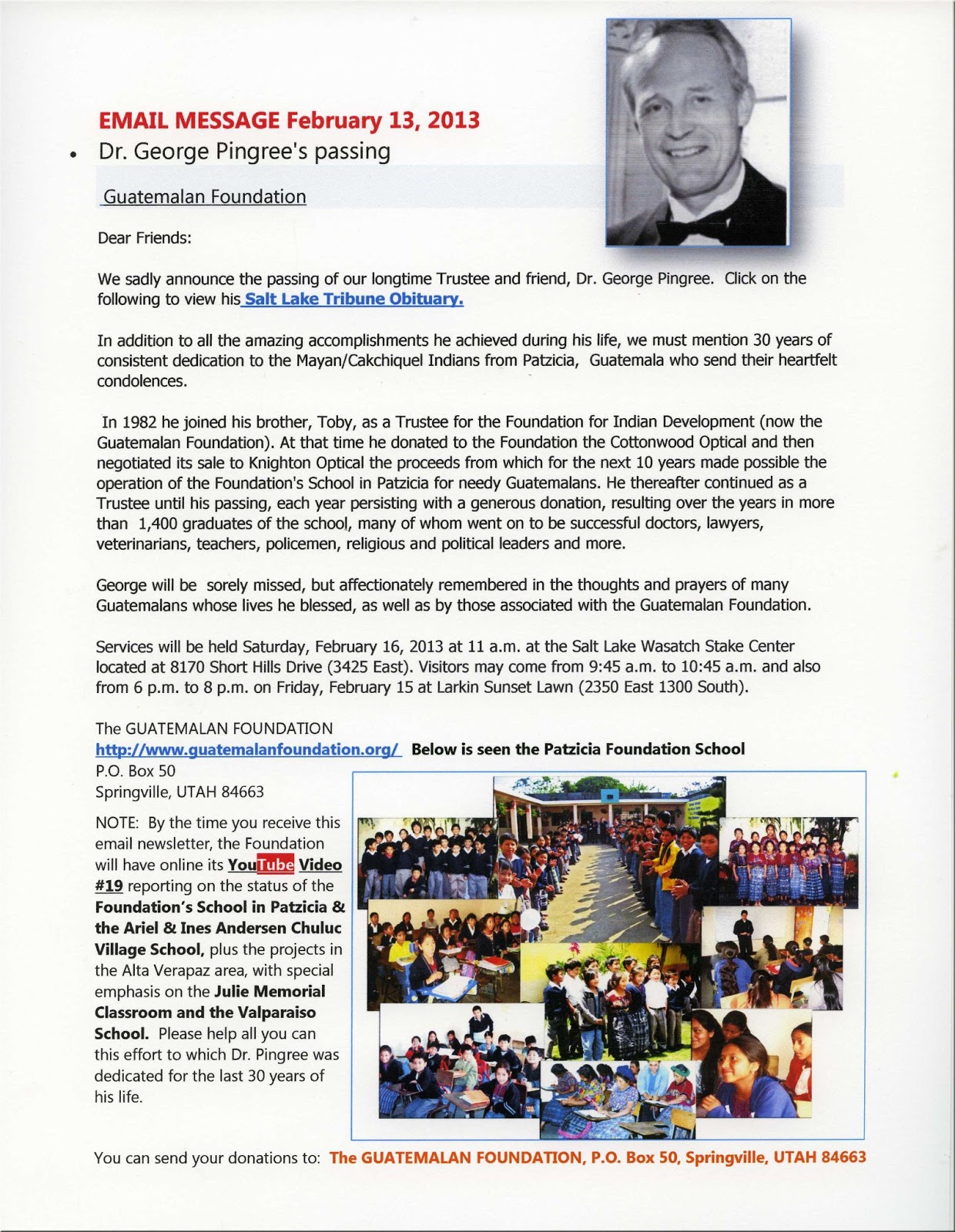 From the Salt Lake Tribune:
George Cannon Pingree, dearly loved husband, father, grandfather and physician died at home on February 10, 2013 after a long and courageous battle with Multiple Sclerosis.
George was born on January 8, 1935 in Salt Lake City, Utah to Job Frederick Pingree and Marjorie Cannon Pingree.  After graduating from West High School, he attended the University of Utah earning a a degree in medical biology.  He was active in student government serving as sophomore class president and as Student Body Treasurer.
From his earliest years, his desire was to become a physician.  he was accepted to medical school while serving an LDS mission in New England.  He graduated from the University of Utah School of Medicine in 1962 and upon completion of a rotating internship in Cincinnati, Ohio, he was commissioned a Captain in the US Air Force.  On July 3, 1963, George married Anne Clark in the Salt Lake Temple and they began their married lief in France where he was a flight surgeon for two years.  Following his military service, George completed a residency in ophthalmology at the Mayo Clinic.
For thrity-four years, George practiced ophthalmology at Cottonwood Ophthalmology and later at the Moran Eye Center.  He had a remarkable and generous spirit and will always be remembered for the deep love he had for his fellow man.  He used his medical skills to bring healing, hope and comfort to those both near and far away.  He served as a medical consultant to the Emir of Bahrain, was a volunteer physician to the Navajo Nation and at the Murray Allen Center for the Blind.  He was a member of the LDS Missionary Medical Advisory Council, a member of the Physician's Licensing Board, and served as a humanitarian missionary for the LDS Church where he coordinated volunteer ophthalmologists in training local physicians in developing nations.
George served tirelessly and enthusiastically in the medical community.  He was a clinical professor and a member of the admissions committee at the University of Utah School of Medicine as well as an ophthalmology consultant at the Veterans Affairs Medical Center.  he was president of the Utah Ophthalmological Society, president of the Medical School Alumni Association, and president of the Utah Medical Association.
George was a committed member of the Church of Jesus Christ of Latter-Day Saints.  Sunday was his favorite day and he loved serving in the church.  He held a variety of callings including, branch president in the University Second Branch, stake high councilor and a counselor in the Salt Lake Wasatch Stake Presidency.  From 1965-98, he served with his wife as a mission president in the Nigeria Port Harcourt Mission.  He loved his African missionaries and being part of the growth of the church in West Africa.
He enjoyed classical music, fine art and was previously a member of the Mormon Tabernacle Choir.  He encouraged his children and grandchildren to work hard and see after excellence in academics and in the arts.
George loved skiing, hiking and swimming and his annual camping trip to Scout Lake in the Uintah Mountains with his children and grandchildren.  His spirit was unconquerable as he faced his many physical challenges with positive determination and courage.
George's greatest accomplishment was as a devoted father to his five children;  Mary-Margaret (Mathew M. Durham), Megan;  Dan (Kristin); Anne-Katherine (Matthew J. Pugmire); Clark and nine grandchildren who were his great  joy.  He is survived by his wife, Anne, his children and grandchildren, sister (Patricia Romney), and brothers (Toby and John).
Services will be held Saturday, February 16, 2013 at 11: a.m. at the Salt Lake Wasatch Stake Center located at 8170 Short Hills Drive (3425 East).  Visitors may come from 9:45 a.m. to 10:45 a.m. and also from 6 p.m. to 8 p.m. on Friday, February 15 at Larkin Sunset Lawn (2350 East 1300 South).
In lieu of flowers, donations may be made to the George C. Pingree, M.D. and Anne C Pingree Legacy Endowed Scholarship at the Univeristy of Utah School of Medicine (801)581-4401). 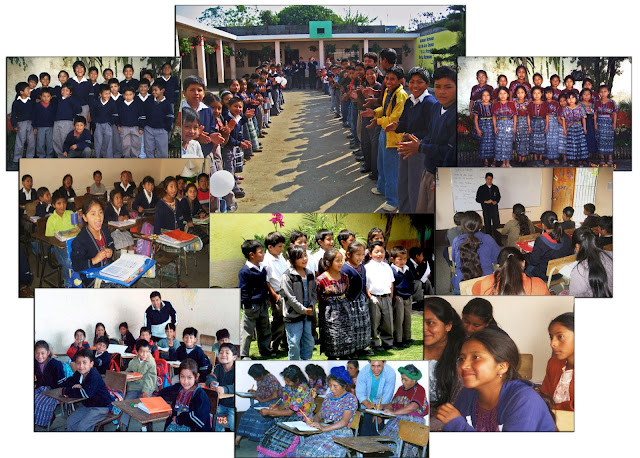 George will be deeply missed by many, as mentioned in his obituary, but I must add one more group--the Mayan/Cakchiquel Indians from Patzicia, Guatemala. In 1982 he joined his brother, Toby, as a Trustee for the Foundation for Indian Development (now the Guatemalan Foundation). For the next 10 years he saved and  made possible the extremely successful operation of the Foundation's Patzicia School for needy Guatemalans by donating The Cottonwood Optical and then negotiating its sale to Knighton Optical. Proceeds from that sale supported the school for 10 years. He thereafter continued as a Trustee until his passing, each year with more generous donations making possible more than 1,400 graduates of the school, many going on to become doctors, lawyers, veterinarians, teachers, policemen,religious and political leaders, and more. The Indigenous peoples of Guatemala, and all involved with the Foundation mourn his loss, and have him and his family in their prayers.