Cordell M. Andersen, Chairman of the Board and Executive Director
He has been the Foundations volunteer Field Director since its inception in December of 1969.  During his mission to Central America from 1956 to 1958 he came to love the Indians and felt the urgency to return and dedicate his life to them based on ideas that came to him as a missionary, that have come to be known as The Philosophy & Principles of the Good Life.  All Foundation projects are based on these ideas.

In 1967 he took the adventurous step of moving to Guatemala with his wife and four small children:  Julie, David, Cristina and Richard.  As they were leaving Provo for Guatemala, an elderly neighbor laughingly said, "I'll give you 6 months and you'll come running home with your tail between your legs!"
He began an agricultural business designed to support the family, employ Indians and use their profits to help them solve their many life and death problems.  His personal and family efforts stimulated the eventual establishment of the Foundation.  He has received many awards and acknowledgements for his work in Guatemala and there are many hundreds of Indians whose lives have been forever changed because of the work of the Foundation.
In 2002 he finally came "...running home with his tail between his legs!" after 35 years of dedication in Guatemala.  He continues in 2015, in his 80th year,  as Chairman of the Board of Trustees, and Executive Director, doing as a volunteer the day by day management of the Foundation...now in 2015 from his tiny 7'x11' travel trailer, equipped as the Foundation's office, and his base of operations for his "High Uintas Wilderness Project" you can learn about at:  http://www.cordellmandersen.com/ Email:  cordellandersen@hotmail.com

J. Frederick "Toby" Pingree, Trustee and Co-Chairman of the Board
Toby served an LDS mission in Central America where he met Cordell and shared his love and concern for the people there.  He has supported the work in Guatemala financially and personally even since before the Foundation was organized, and persists with his support now in 2015.  Toby served as Mission President in Ecuador where the people share many of the same characteristics as in Guatemala.  Married with six children and eight grandchildren he lives in Salt Lake City.  He is a CPA and Financial Advisor and is partially retired,  He also served for many years as Chairman of the Board of Trustees of the Sunstone Foundation, recently retired from that volunteer work. Email:  tobypingree@comcast.net

Joseph A. Andersen, Trustee
He was the first Andersen to be born in Guatemala (1968).  He has worked as a volunteer for the Foundation in various capacities since his youth.  He works as a mental health counselor in Pocatello, Idaho and lives there with his wife, Darcie, and three children,  and finds his work with families particularly fulfilling.  He is particularly interested in supporting the well being of families in Guatemala.  He believes education is of the utmost importance in the lives of youth in order to bring about future prosperity in the collective lives of underprivileged Guatemalans.  He supports the values that the Good Life Principles stand for and the well being they can bring to families in Guatemala. Email: joeowl1@gmail.com

David L. Andersen, Trustee
He served as the Foundation's Executive Director for a few years, and has been a Trustee ever since and  has financially supported the Foundation.  He is successful in the manufacturing sector and various other entrepreneurial ventures.  He served a proselytizing mission in Barcelona, Spain as did his wife, Terri.  He earned his Bachelor's Degree from Brigham Young University.  He enjoys the outdoors and the evenings at the ball park watching his boys play baseball.  He served as Little League President for 2 years, and continues to serve in various capacities on the local Little League Board of Directors.  He resides in New Mexico with his wife, Terri.  They are the parents of five sons, and one daughter, the family now growing quickly with 4 grandchildren.  Email:  andersen.dave@gmail.com

Hal Poulsen,  New Trustee
For his biography go to the VOICE Update #4-May 2012 on our Newsletter Page.  He and his wife, Neva, learned about the Foundation in a fireside held in his parents home in Orem, Utah in 1975.  He had served an LDS mission in Brazil from 1966-68 and became deeply concerned about suffering people.  As a result he, Neva and their daughter, Jeanie served as volunteers in 1976 at the Foundation's Development Center in Guatemala. He taught the native students improved construction methods and left at the Center a welder and other tools, as well as his vehicle and hand-made trailer.  They have persisted over all these years as primary donors to the Foundation and welcomes the opportunity to continue serving. Recently he volunteered to put off retirement for a year continuing as a part-time school bus driver direct depositing his entire $12,000+ yearly wage to the Foundation's bank account.  They presently live in Salem, Utah.  We welcome him as a trustee replacing Julie who passed away suddenly on February 22, 2012. 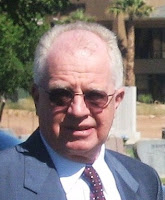 Joseph C. Jensen, Special Adviser to the Board of Trustees
He was born in Pocatello, Idaho where he grew up and eventually attended Idaho State University with majors in French and Economics.  He received an MBA from Dartmouth College.  He joined Pfizer Inc. in 1968 where he spent his career in different management positions, largely overseas as President of the Pfizer Animal Health Group for Europe, Canada and Africa.  he is currently serving as Chairman of the Board of the Idaho State University Foundation.  He began helping the Foundation in major ways in 1998, and now for 17 years almost single handidly financed the Foundation's school in Patzicia.  We are pleased he has been and will continue being a special adviser to the Foundation's Board of Trustees. Email:  joe.jensen@me.com 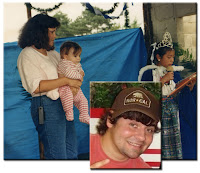 Bronson Duerden, Special Consultant
Bronson, 24 (2010) is Julie's son, presently studying at Utah Valley University where he will graduate in 2011 with a double major in International Business and Spanish.  He served a mission in Argentina and recently did a 3 month internship there for the Fundacion Pro Vivienda Social living in the slums and working to improve their standard of living.  he says he has a burning desire to do something to make a difference in the world, and with his deep love for Latin America and its people, is excited to have the opportunity to collaborate with the Foundation, and we are happy to welcome him with new insights and enthusiasm.  In the photo you see Bronson in his mother's arms at the inauguration of the Ariel and Ines Andersen Chuluc School in 1987.  Email:  bronsonduerden@gmail.com

Mahana Andersen, Special Consultant
Mahana, 19 (2010) was born in the Valparaiso Community, Guatemala and grew up as part of the Andersen family.   She graduated from Springville High in May 2011, and later graduated from  Stevens Henager College in Orem, Utah in nursing. She now resides in Provo, Utah with her son, Ryan.  For the past 7 years she has been responsible for mailing the Foundation newsletter, and has taken over the job done for many years by Julie receipting now a yearly receipt sent in January to donors along with yearly financial reports.
Email: mahanaandersen@hotmail.com 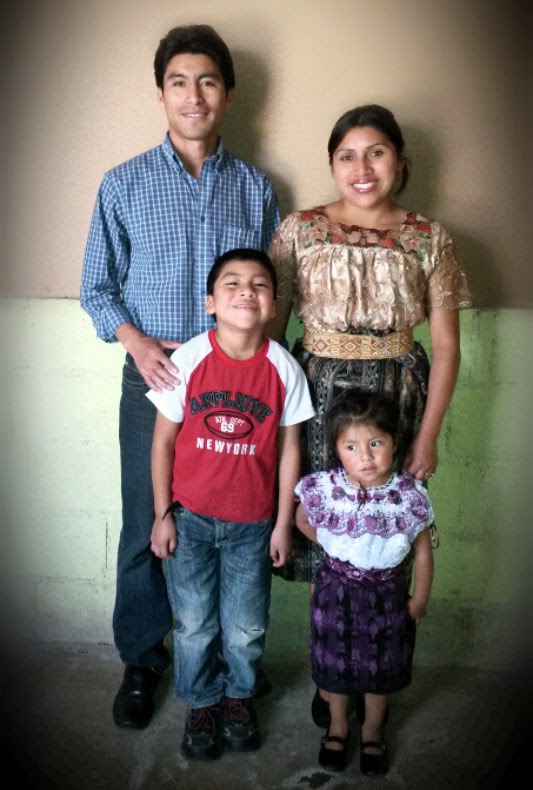 Mario de la Cruz Ajqui became the Regional Director for Patzicia and the Central Highlands in December 2014.
He was born in 1983 in a rural area of Santa Cruz del Quiche to humble parents who worked hard in agriculture--a very hard life most of us can't even imagine. Soon after they had to leave that area due to the violence of the Guerrilla War, and took refuge working on plantations on Guatemala's southern coast.  Eventually the family moved to rural Patzicia where he resides today with his young wife, Elena, and children, George Mario, and Hellen. family you see to the left.


Mario finished his elementary education at the  Foundation's School in Patzicia, then went on to complete his high school education in Patzicia, and with a Guatemalan Foundation scholarship on the university level went on to acquire his Teaching Certificate, while being the volunteer secretary at the Foundation's School. Now, continuing  with a Foundation scholarship, he lacks a bit more than a year to achieve his Law Degree studying on weekends in Guatemala City, while also working as a teacher, paid by the Foundation, at the Ariel & Ines Andersen Chuluc Village School near Patzicia.  In addition to Spanish he speaks two Mayan languages, Quiche and Kaqchiquel, and rates his English at 75%.  We are proud to have this outstanding young man be our representative and be able to help him finish his higher education.  He is blessing the lives of his people.
Email: mariodelacruz-@hotmail.com

Federico Veliz, Regional Director for Santa Cruz Verapaz, and Alta Verapaz
He has been deeply dedicated to helping his people for more than 42 years, often giving of his free time and his salary--when working as a rural school teacher, and now retired as an incredible Guatemalan Foundation volunteer Director.  He was a rural school teacher in Santa Cruz Verapaz for many years. He has been a key figure in transforming many villages into centers of progress.  He was the Director of the Acamal School, which became a model school visited by the Minister of Education and groups of leaders from all over the country, as well as foreign countries, such as Japan, Israel and Africa.