IMPORTANT NOTICE ON THE PATZICIA SCHOOL PROJECT
In recent newsletters it was mentioned that we had in reserve enough funds to cover the support of the two schools for this year.  A recent review of money in reserve, and the expenses to complete the school year, revealed that we are actually $4,000 short,  SO PLEASE HELP ALL YOU CAN.
Remember we need someone, or some organization to commit  to funding  the two schools from 2015 on.  Otherwise this will be the last year for the Patzicia School that we have supported since 1982.

August 25, 2014 UPDATE  (scroll down)
The  "BREATHTAKING HISTORY"  & LAST STEPS IN THE
VALPARAISO SCHOOL PROJECT
Note:  Click below  To see the previous post with:
The History of Education in Paradise Valley

INTRODUCTION:  The official inauguration of the 2014 Foundation projects at the school will be held on Guatemala's Independence Day, September 15th.  A few days after that we will make a final summary of the whole project and post it here. In the meantime, let's see what has been done since the last post.

We begin with a half dozen photographs to review very briefly the history of education in the Valparaiso--or Paradise Valley area of Santa Cruz Verapaz, in the north-central area of Guatemala where all Foundation projects began in 1969.. 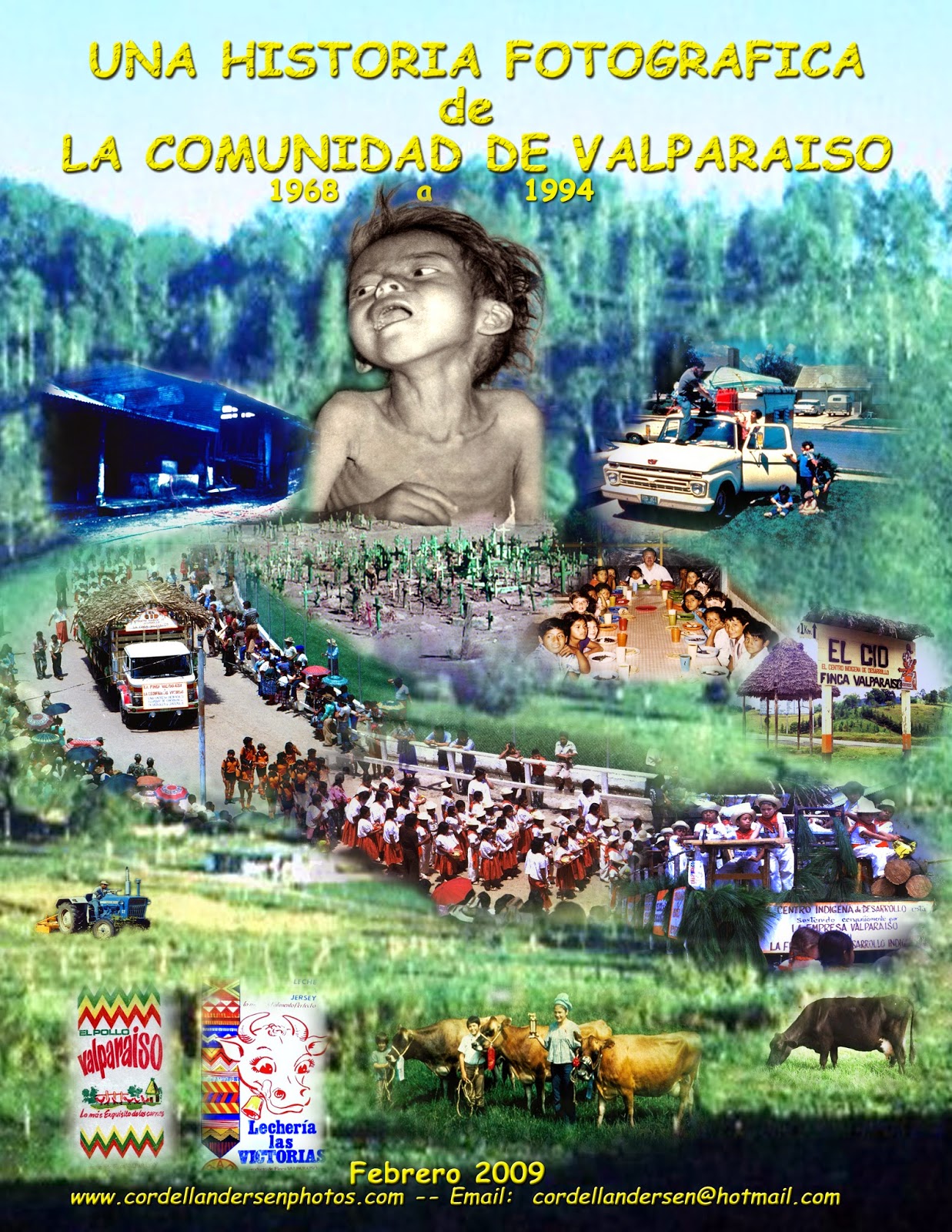 We see above the cover of a 45 page publication that was done on request from the people of the rural Valparaiso community a few years ago. 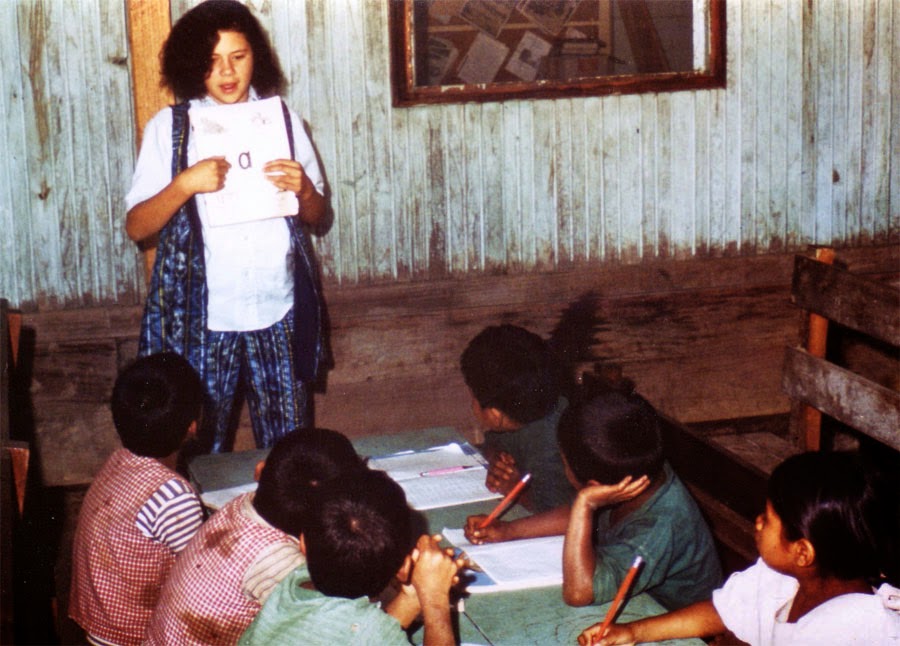 The effort grew and multiplied through the last 27 years of the 30 year Guerrilla War, and to the present going through many phases of construction and development with the hoard of elementary school children we see above and below studying in the morning.

And "breathtakingly"  something that just doesn't exist in rural Guatemala...a
.JUNIOR HIGH SCHOOL,
now with the 97 teenage students we see below. 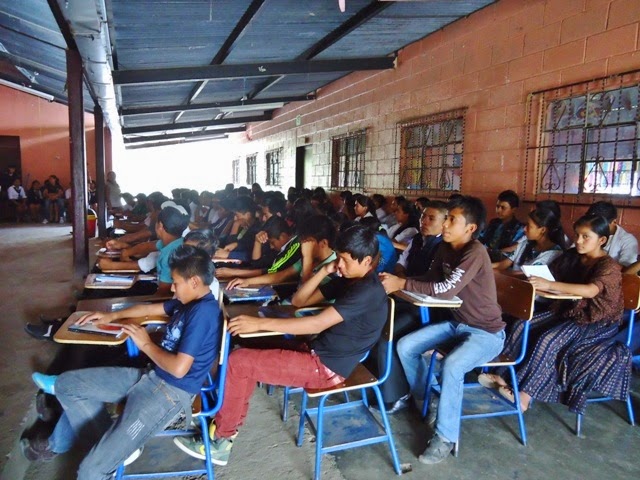 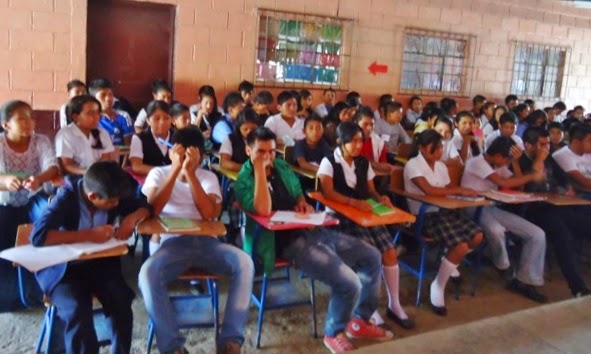 They come from 7 different village areas that surround the school including from the Chiquiguital Village mentioned at the end of this post. 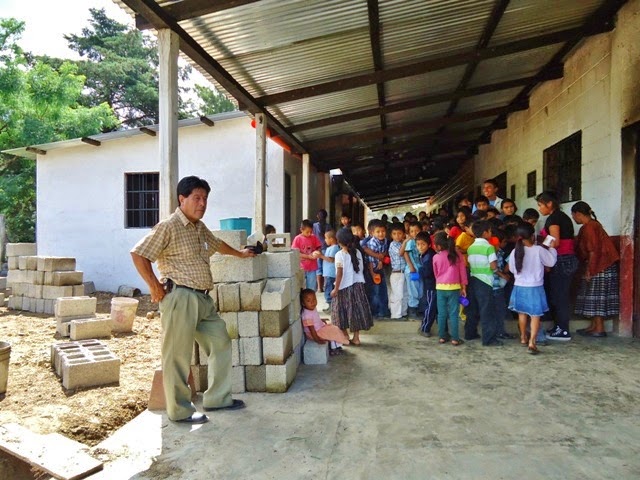 All of this wonderful development has been supervised by the Guatemalan Foundation's volunteer Regional Director, retired teacher, Federico Veliz, we see in the photograph above supervising one of  the projects mentioned in this report, and many previous ones. 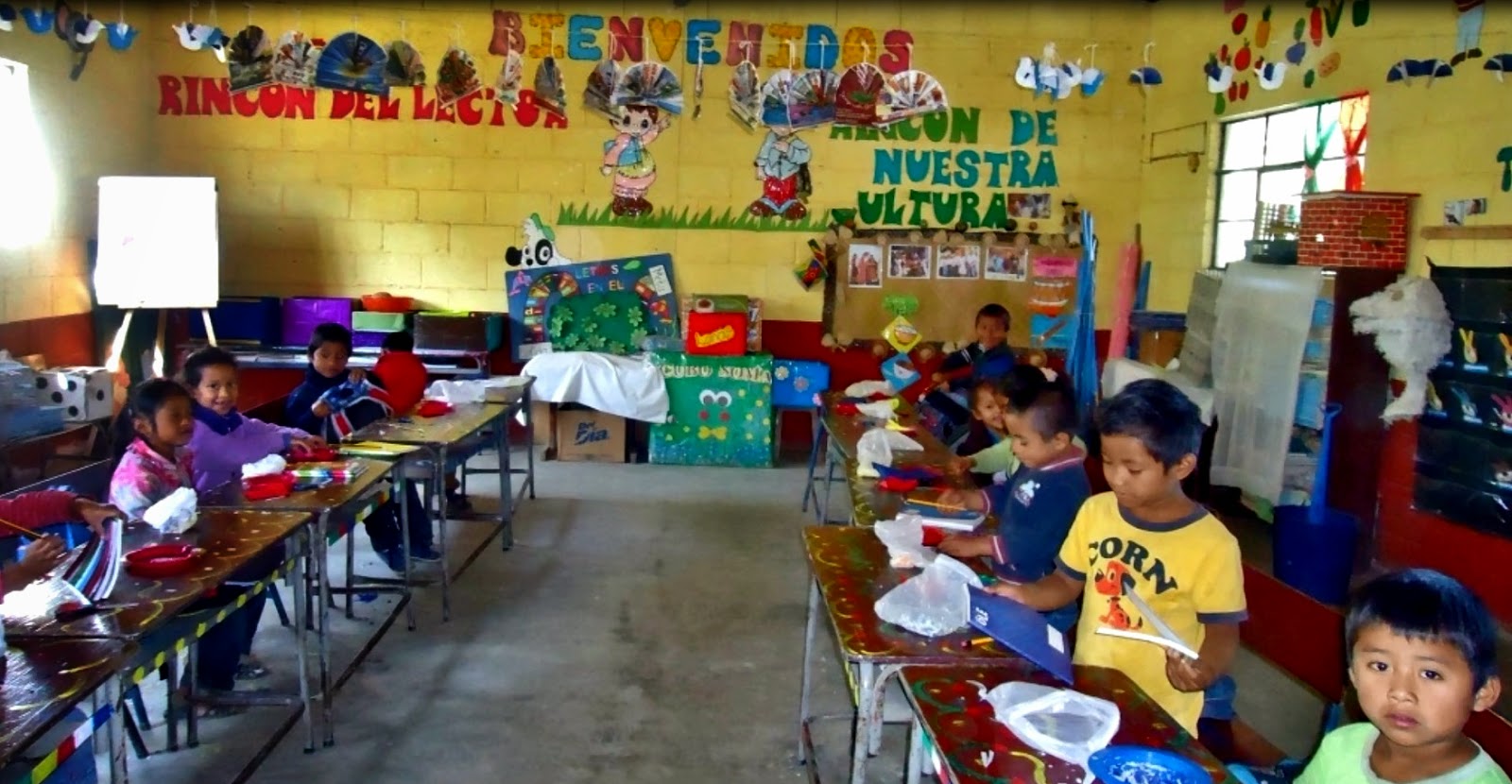 In 2012, with the passing of who we call the
"First volunteer...and Teacher,"   Julie Andersen,
Federico supervised the project to construct the "Julie Memorial Classroom,"   we see above, and at the same time the re-construction of the school kitchen used for the daily nutrition program, seen below. 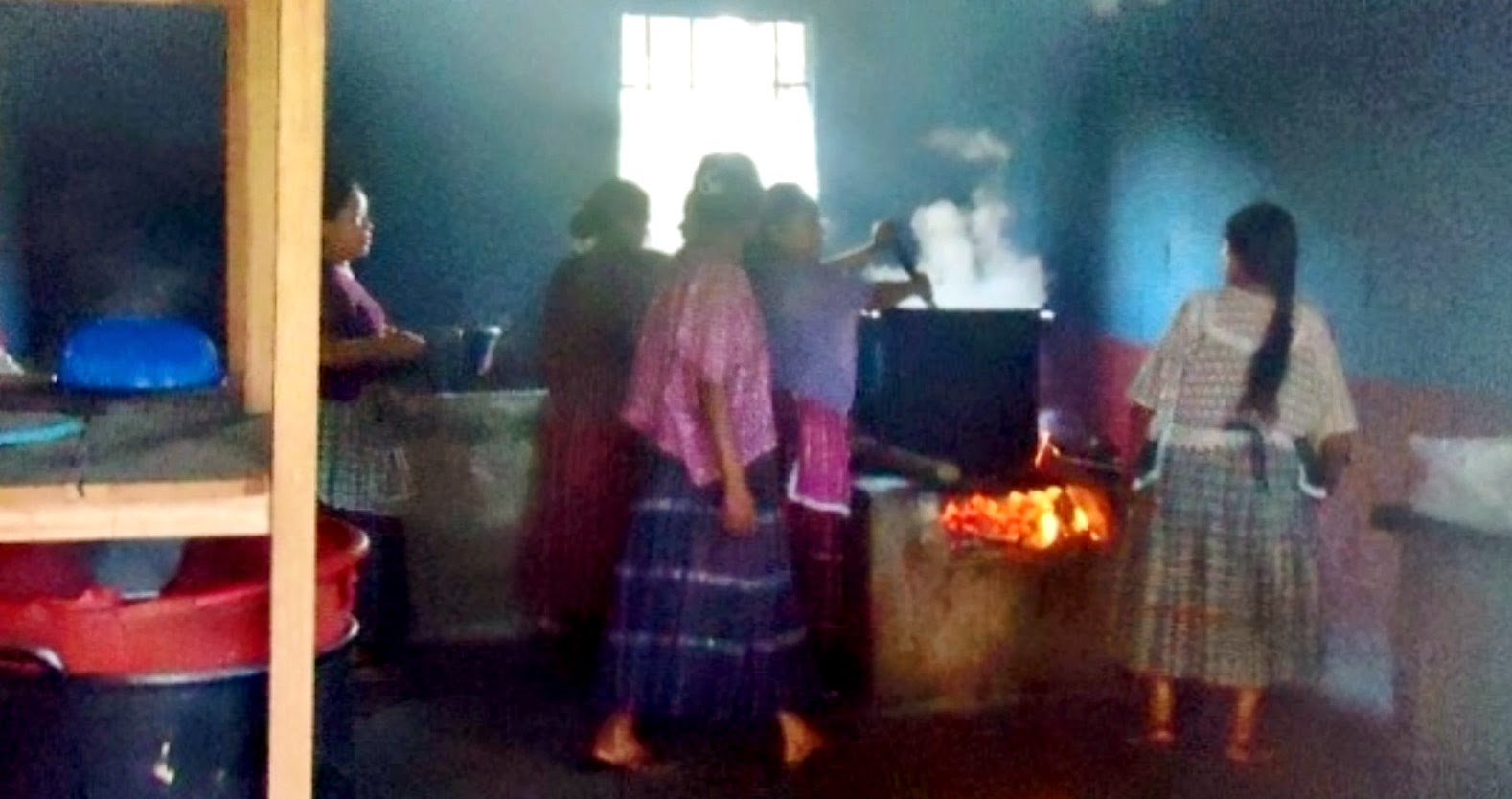 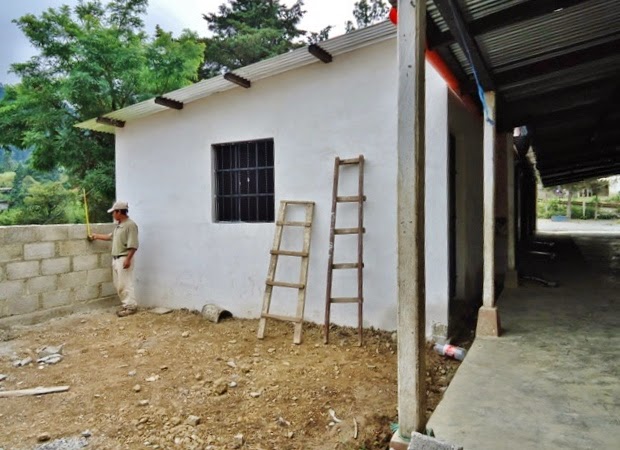 Already reported on was, first, a storeroom for the kitchen and nutrition program we see above, that included a foundation and wall  enclosing the upper level of the school  that continues from the storeroom  around to the end of the building where the kitchen is as seen below. 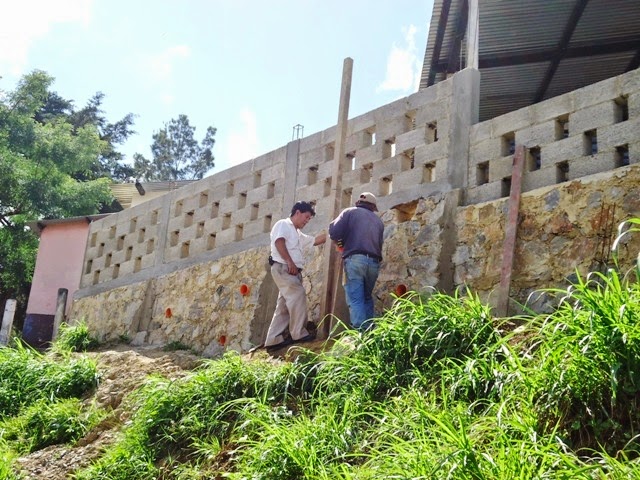 From that point, a stairway was constructed down to the lower level where a large 5 classroom building is found along the river, where also is the play area and soccer field shown in previous posts. 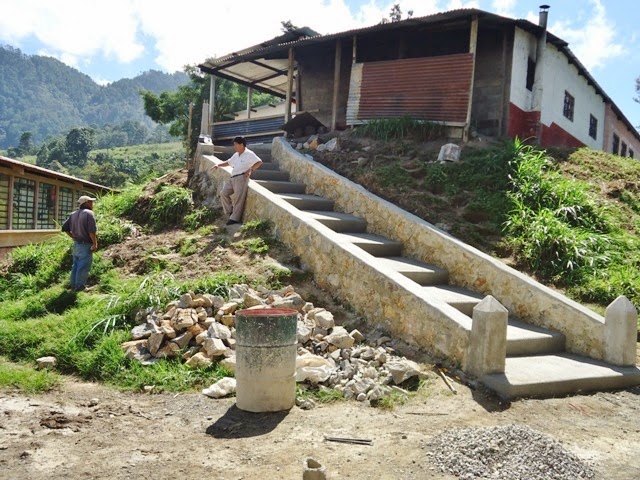 To hopefully prevent the children from climbing up on the wall and falling, we installed a metal protective structure on top of the wall as we see in the photos below. 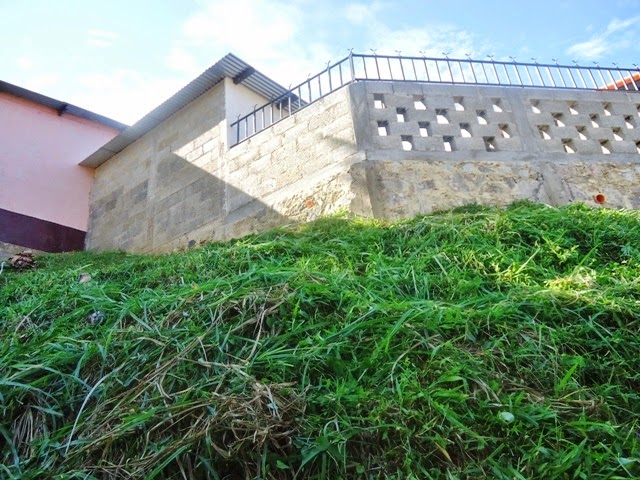 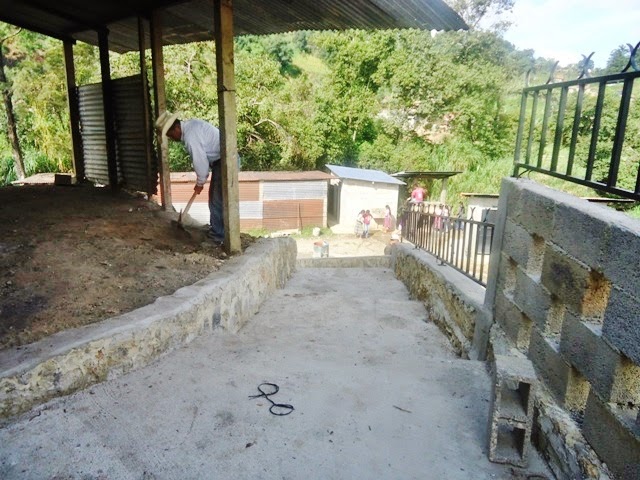 To control the large quantities of rain water that drain off the roof of the upper level school  a gutter was constructed down to the lower level. 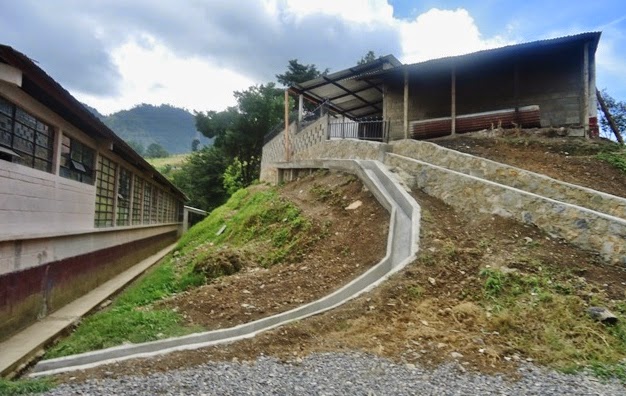 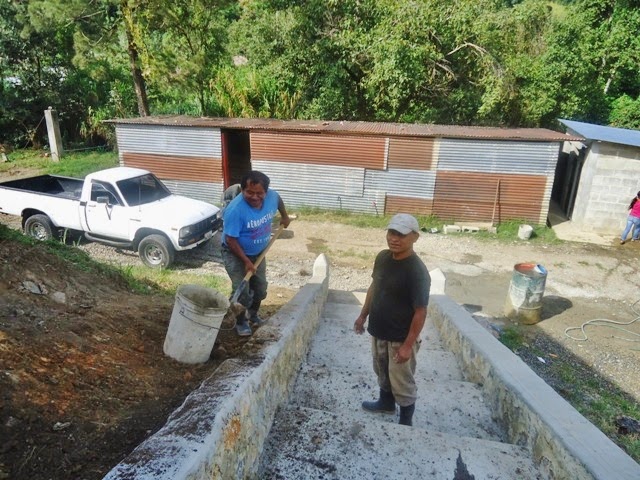 With those construction projects finished volunteers from the Valparaiso began cleaning up, and doing a bit of landscaping.  Among the volunteers we recognize one familiar face, that of Miguel Tul, .with whom we had a long history at Valparaiso. 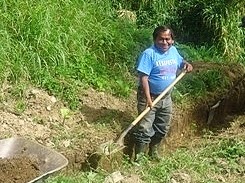 Miguel Tul went through many fascinating phases at Valparaiso, from student in the vocational program.to living for a time at the Central House, and to being an employee, eventually being put in charge of "animal health" for the Las Victorias Dairy we established on the Valparasio Plantation in 1972. He became the only resident from Valparaiso who learned how to check cows for pregnancy and do artificial insemination, and so we dubbed him "Dr. Tul."
Eventually he sold some of the property I had given him and his family when we established the Valparaiso Community--sold to the LDS Church, along with 4 others residents, on which property the Church built a large chapel  complex that overlooks the community. 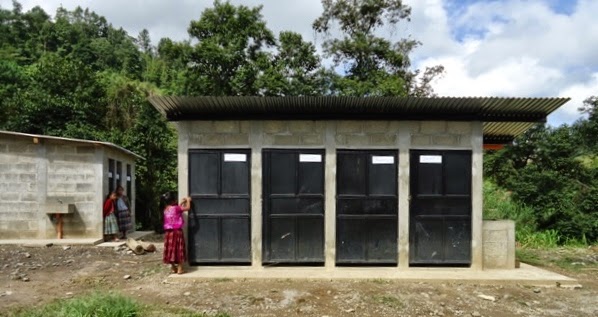 Sanitary facilities were constructed to replace the original ones built in 1982, and it was decided that washing facilities would be built in strategic locations so all could wash their hands, and wash their dishes from the nutrition program. The first is seen  above to the left, and enlarged below.

Another was constructed between the two sanitary facilities, the construction of which we see in the next couple of photographs. 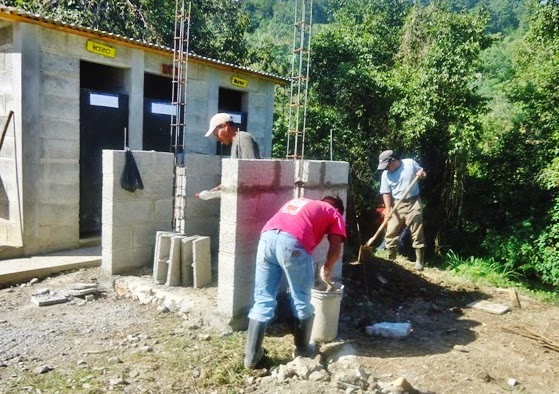 Miguel and companions are seen digging a ditch for the drainage from the washing facilities. 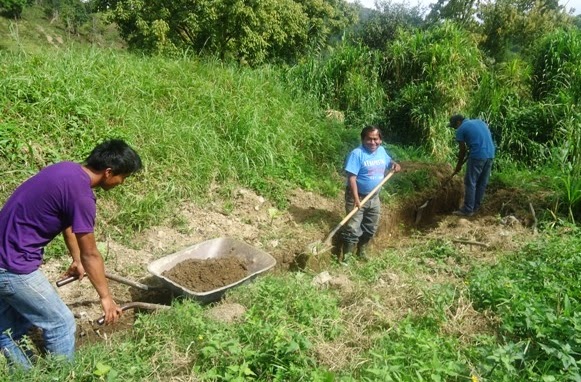 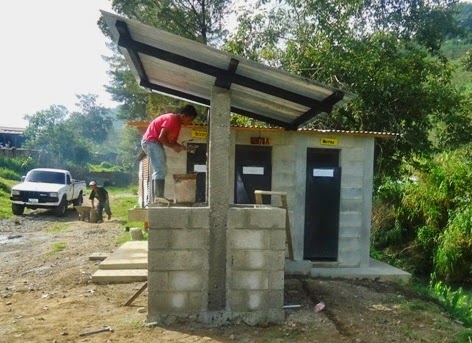 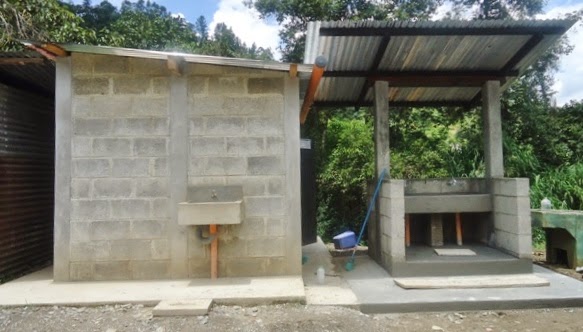 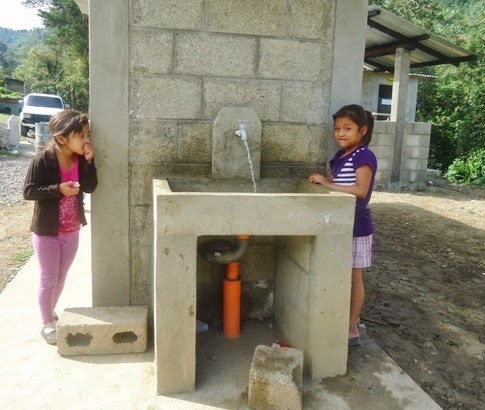 The third washing facility was built at the end of the larger sanitary facility that has flush toilets. None of it is exactly like the wonderful restrooms at the American Fork Public Library, where I spend a lot of time lately,   but....let's say, a lot better than nothing and better than any rural Indians have in their homes.
When we began at the Valparaiso Plantation in 1968, none of the 39 thatch homes had an outhouse.  Their homes sites were "incubators for disease and death!"  40% of the 240 resident Indian's children had died already, and we found more sick and dying in every home, and went to work. 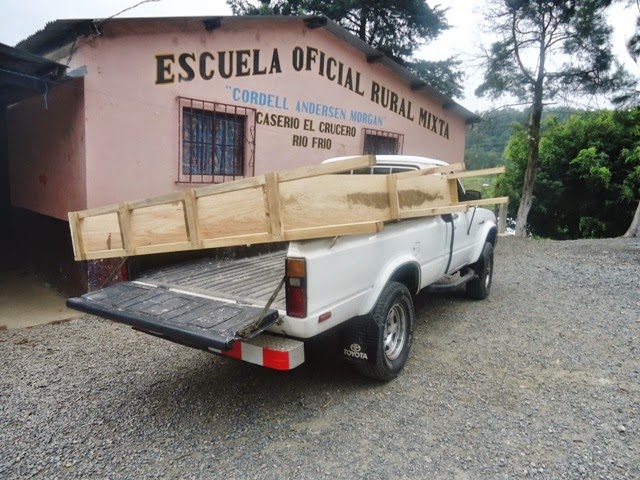 The last phase of the projects at the school was to provide the storeroom with a shelf unit, to get them started being able to store the food for the nutritional program. 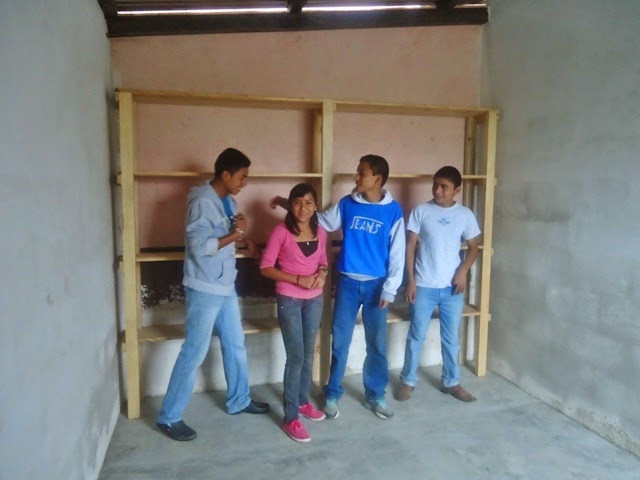 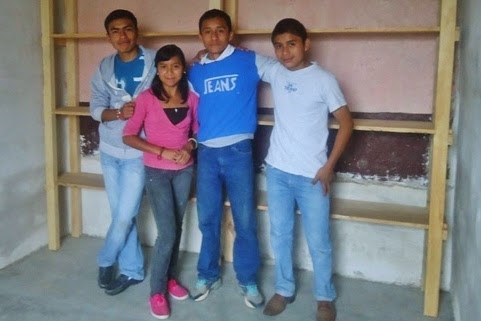 For those of us who lived this history, it is literally BREATH TAKING to see what has developed over the nearly half a century since it all started, and we thank profoundly each of you who helped make it all possible..... 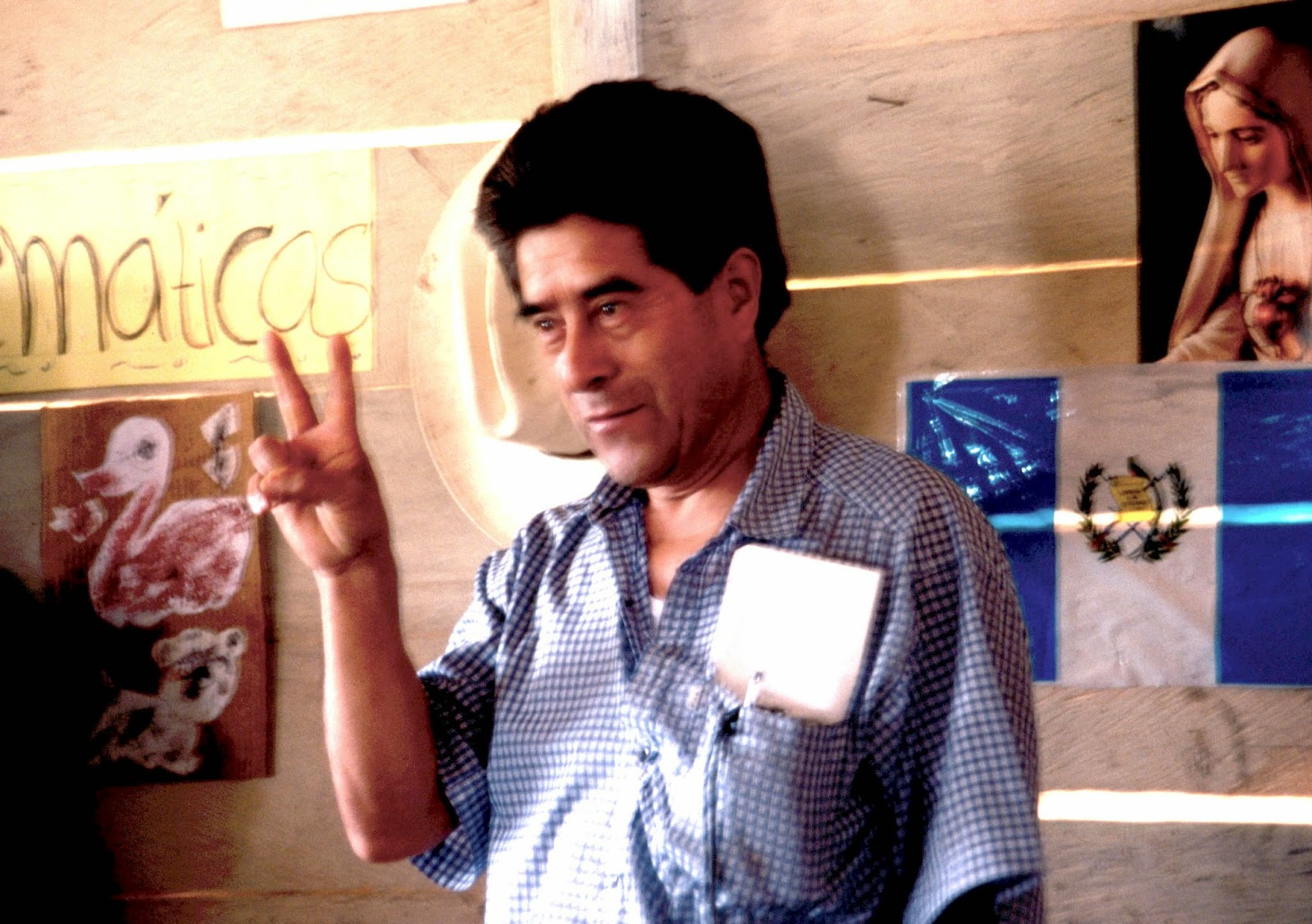 .....and again I have to say it is "BREATH TAKING"  to see the work done by our Director, Federico Veliz, who has worked with us as a volunteer for 42 years!

THE NEXT PROJECT
3 classrooms added on to the government school  in the remote....
CHIQUIGUITAL VILLAGE
This is a very isolated area located 2 hours on foot from the nearest road high in the mountains south of the Valparaiso area.
I got to know this area back in 1974 when for the 2nd time we had cattle rustled.  It had to stop, so with what we could call an armed "posse" we penetrated the mountains  on foot following the trail that went all the way to the Salama area, recently highlighted by Dr. Rand Paul who went on a medical mission there treating many poor Guatemalans with eye problems--shown on KSL TV news last night (Aug. 24, 2014).
By the late afternoon,  after having zig-zagged all over the mountains following leads, we arrived at the Chiquiguital Village and slept that night in the simple government school.  To catch the rustlers and recover our animals we eventually had to give a "tip" to a policeman and drive to Salama and hiked  3 hours hours towards Chiquiguital and Valparaiso, eventually recovering our animals and putting the rustlers in jail.

In 1982 the guerrillas burned down that school we had slept in at Chiquiguital, and for many years the children there had no opportunity for education.  In 2003 parents from the village lost their patience, and put a sugar cane thatch roof on the walls of the school that had remained, and haphazard classes began for the children.  By 2005 the number of students were out of control and the villagers pleas, with the help of a government teacher, were paid attention to the government Development Council built 2 classrooms.

Now, 9 years later they need 3 new classrooms and  sanitary facilities, which is our next project already underway  that will cost approximately $5,000.

The Foundation has provided a portion of that already and construction materials have been ordered and will be delivered to the end of the road at Pancalax on August 29th.  Federico has the villagers organized to begin hauling on their backs said materials so that the construction can begin.  Adventurous progress reports will follow soon.

Please help all you can, as often as possible.

I'll end this post with a photograph of the mountains we are talking about. 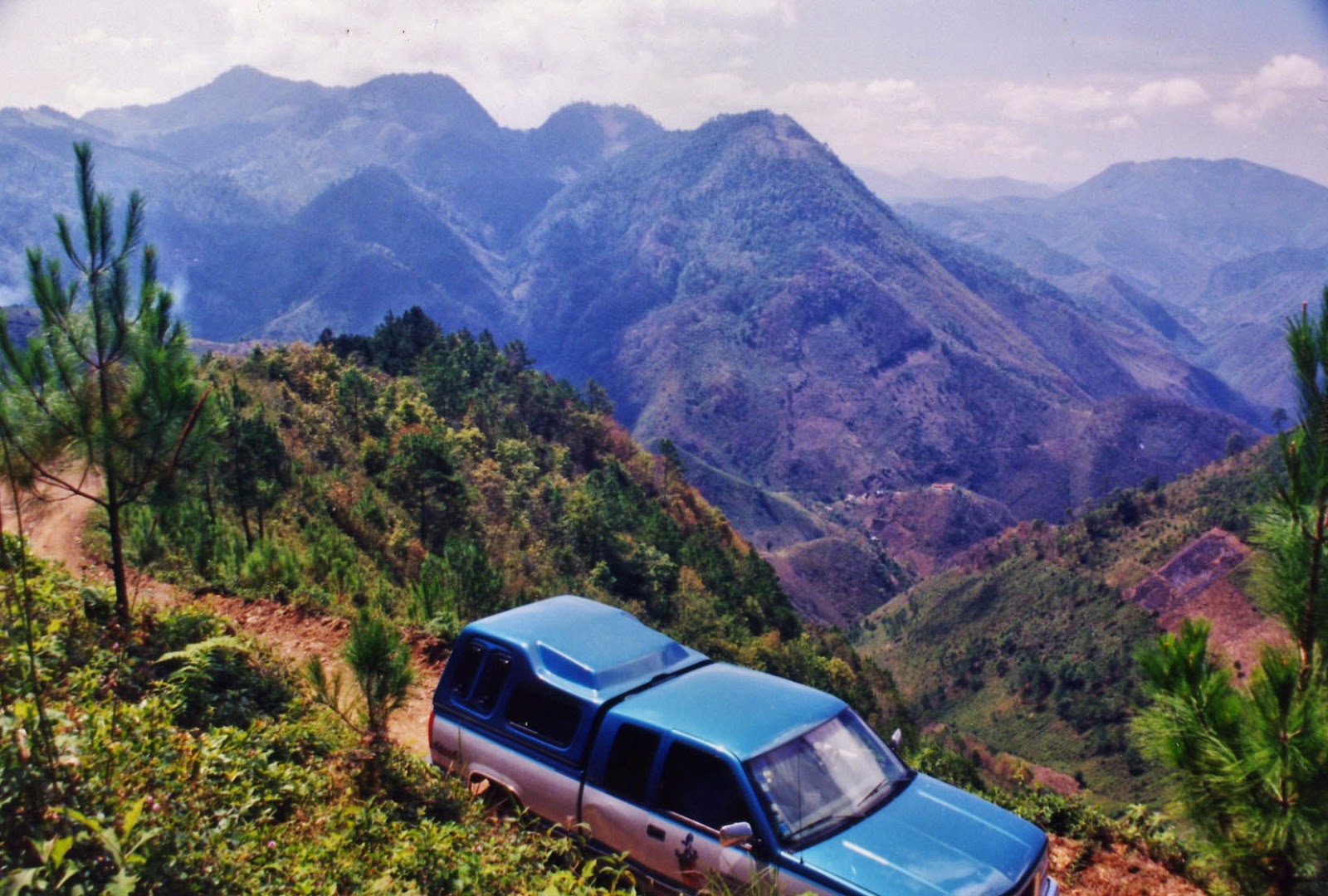 Posted by Guatemalan Foundation at 5:47 PM