KEY MOVIE THAT SAVED MANY LIVES AT VALPARAISO, GUATEMALA

INTRODUCTION:  One key element from 1970 was not mentioned, and was so crucial for several reasons that we  begin this photo/essay with it.  It was connected to the bacteriological experiments to convince the Indians of the "invisible world of microbes," by growing them in Petri dishes, and showing them with my dad's  old microscope.
I'm referring to what we could almost call an ancient movie made in 1936....of course black & white...which movie at the time was acclaimed as perhaps the "best ever produced."  It was :
MAKE NO MISTAKE THIS MOVIE  HELPED SAVED MANY LIVES!
THE STORY OF LOUIS PASTEUR
Note:  You can see it on YouTube at:   https://www.youtube.com/watch?v=LptOXFYG_SI
Two montages  inserted  below  will show key scenes:
Louis Pasteur had several problems he had to struggle with his entire life:
1.  Living in France in the 1,800's he was dedicated to finding  a way to save human lives, but he was considered by the "authorities," i.e. the Minister of Health, & the Academy of Medicine, to be out of his element as he was a chemist & not authorized by them.  Today, in 2016, it would be said he was not part of the "establishment," nor "called."   So at best, in the medical field, he was  a "novice" not to be taken seriously;
2.  The "authorities"  believed they alone were the judges and arbitrators in such matters, and stubbornly persisted with traditional beliefs and practices that, rather than save people, were responsible for thousands dying. 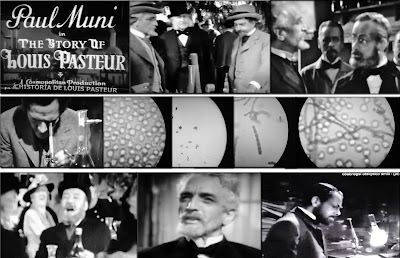 Pasteur's teaching health care workers should wash their hands, and boil their instruments to avoid contaminating patients with microbes--which he taught were the cause of disease, were laughed at and condemned. The authorities rather considered microbes the result of disease, rot and bad odors, rather than their  cause.  They had it all backwards and wouldn't listen to Pasteur.

The Minister of Health talked to the King, and mentioned Pasteur's teachings, and said "If I was to do something so absurd as to wash my hands, or boil my instruments, they would think I was a witchdocter resorting to charms and laugh me out of the hospital!"  and, "It's preposterous that a man can be killed by a tiny animal 10,000 times smaller than a flea!"
The King told Pasteur "In the future to do anything.....you will get authorization from the Academy of Medical Science....and will publish a retraction of your pamphlet on washing hands, etc."
All of this was the 19th century French version of being "laughed to scorn!"   And, we could add the temporary end to progress by stopping Pasteur,
because of  "Widespread misunderstanding!"

The opposition of the authorities was so much that he finally gave up trying to save humans and moved to an outlying province to prove his ideas by dedicating himself to saving animals--sheep and cattle.
Decades passed when France had a giant problem with anthrax killing domestic animals, except for one province.   The Minister of Health and other authorities wanted to just ignore said province saying it was probably the water, or just good luck, but one insisted on investigating to find the truth. 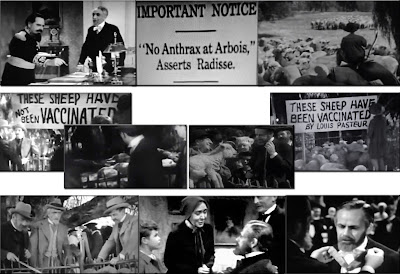 In Arbois, they found Pasteur who had developed a vaccine and had all the sheep healthy. Eventually it was decided on an experiment with 50 sheep, divided into two groups. 25 would be vaccinated, the others not....then all injected with blood from sick animals. In 48 hours the un-vaccinated were dead, the others healthy and alive.
But even with that the head authority, the Minister of Health, was stubborn.  Eventually Pasteur developed a treatment for rabbis, sticking his neck out--risking prison or execution, with a young boy seen in the middle above, and saved him, plus others.  In that period Pasteur had to resort to the Minister of Health, as a surgeon, to help his daughter in childbirth, but insisted the Dr. wash up and use boiled instruments.  Louis Pasteur was   finally recognized for his incredible accomplishments & how many millions, if not billions, have been saved by him "not giving in, nor giving up!"

NOTE:  As you go through our history, you should notice some similarities in our experience, with those of Pasteur's.

At Valparaiso, during 1970, this movie with the translation into Poqomchi by Miguel Max, along with our experiments growing microbes, and showing with the microscope.....finally had our people begin digging their outhouse holes and by the end of the year we had 100%,  and death was stopped in it's tracks! Yes, there was still sickness  from time to time, but our Home Visitors found the sick on time and they were treated easily.

By the end of 1972,  30 months had passed with no death in the valley--while during the same period 8 LDS babies died in Patzicia!   Would this be important enough to impress  important people?  Would they be willing to honestly investigate and learn the truth.....or continue
to rely on the gossip & criticism that had created
"widespread misunderstanding?"

By mid-1972 great success would be threatened by the "establishment" but ended with authorization to continue--producing miracles!
WOULD WONDERFUL RESULTS END OPPOSITION?
Posted by Guatemalan Foundation at 9:56 AM