On about July 9 we were packed and ready to leave.  The pickup was 2,000 lbs. overloaded, but I had put  overload springs on the back, and purchased the best tires available--Michelin radials that weren't common yet......
There was just barely space on top of our load in the camper for us to sleep.  We drove to my folks place on Ash Avenue in Provo, Utah to say goodbye.  That's when their elderly neighborhood, Sister Cannon, came out and with a sarcastic smile made the famous prediction of our failure:  "I'll give you 6 months and you'll come running home with your tail between your legs!"  I swore, silently, that I would die before giving her satisfaction. 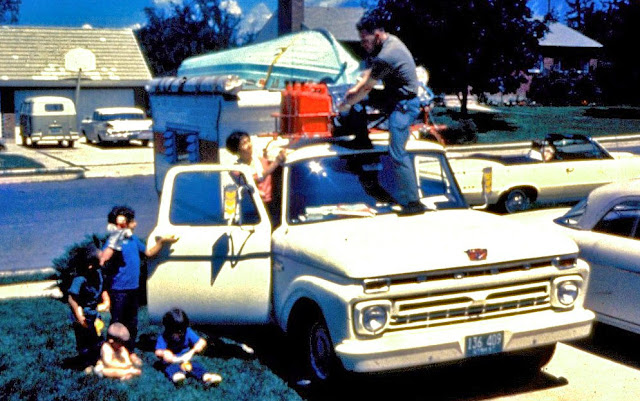 What we called "THE ANDERSEN FAMILY PRIVATE PEACE CORP" WAS BORN!

After a tearful prayer with mom and dad, we headed south towards the Nogales, Arizona border crossing taking about 2 days to get there.
A photo/essay on this segment of our history can be seen at the following link:
Episode 1: 1967-68...with 88 photographs  THE QUIXOTIC ADVENTURE BEGINS

You can also get details from the photo/essay:
HOW THE FOUNDATION BEGAN

We were stopped at the Mexican border and told we  couldn’t pass through the country with so much stuff. l had made a vow I  wouldn’t give in to the bribe system, but do everything with complete honesty. The border officials admitted that there was a legal way to do it, but I  would have to go to a customs broker. I tried many and they all just shook their heads, suggesting giving bribes. After another talk with the border officials I kept making the rounds of custom brokers, finally finding one who said he could do it, but that it would take from 1 week to 6 months. We unloaded all the prohibited items in the broker’s warehouse and drove 250 miles south to San Carlos Bay you see  below  where we spent a week. 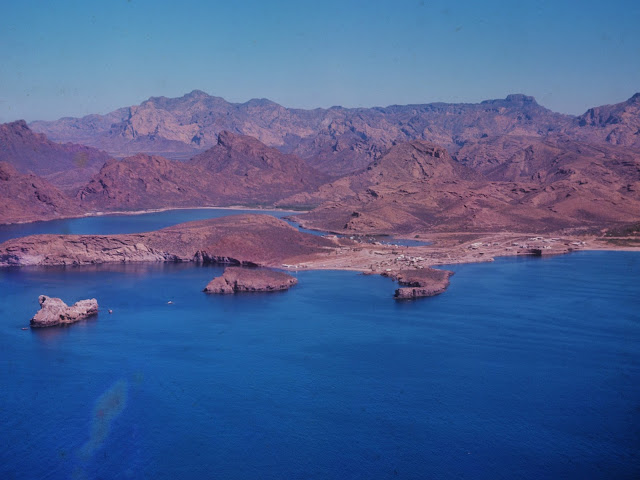 Below is seen the inexpensive bungalow that we rented giving the custom's broker time to do his magic.  During 5-7 days we spent there we had some of the most dangerous, but miraculous faith promoting experiences that would prepare us for the life of "crisis to crisis" that would soon intensify.  Some of that is mentioned briefly in the above
Episode 1, but sadly so far I can't find the "long version."  For our family at least it is crucial, so I will re-write it when I have time. 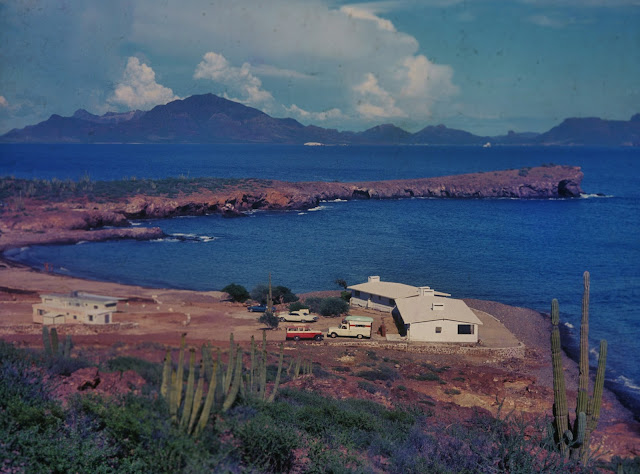 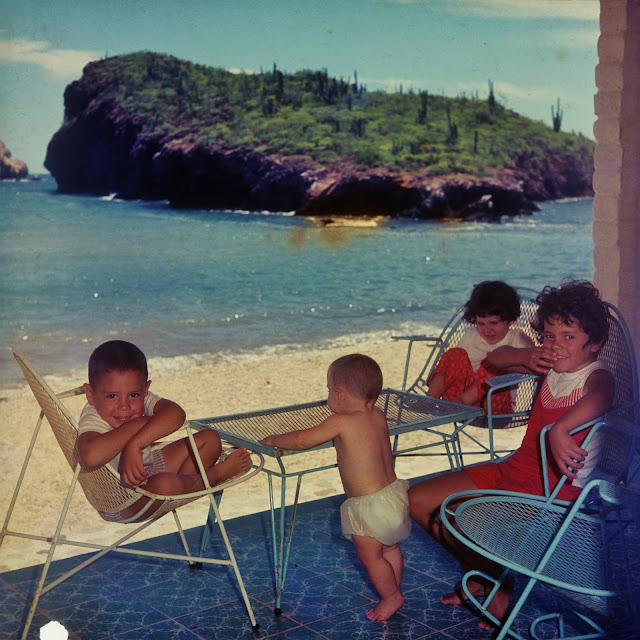 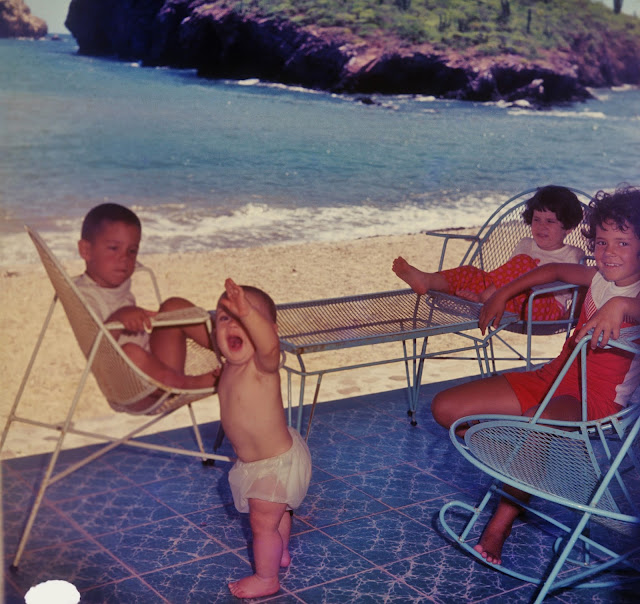 Then back to the border. No word had come.

We  couldn’t afford to remain there spending more  of our  meager $4,273 dollars of capital. So we unloaded most of our stuff in the broker's warehouse, and  returned to Provo on about the 25th of July, just 2 weeks after leaving. Sister Cannon came out and couldn’t contain her laughter. It had only taken 2 weeks to return with our “tails between our  legs.”

I  went back to making more Andersen Samplers for the next two weeks.  Finally  a telegram arrived from the broker saying the authorization had come from Mexico City. 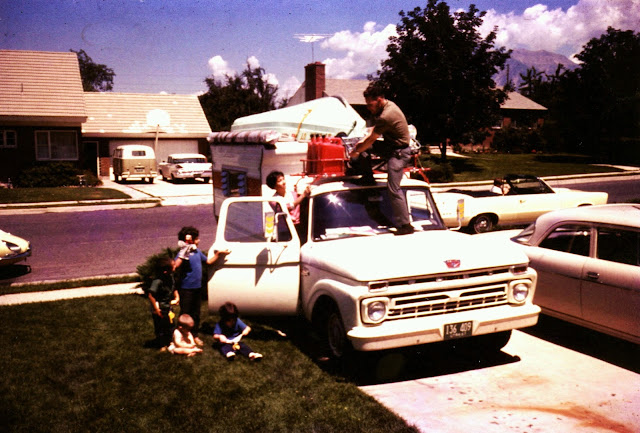 SECOND ATTEMPT
So we packed up again, but this time did what I felt had been missing from the first attempt:  I sat down with my parents and had a very spiritual heart to heart conversation about why we were doing this, and what & how we believed it could be accomplished.  I then asked to be given a "Father's Blessing," which dad tearfully did, and finally we were ready the right way. 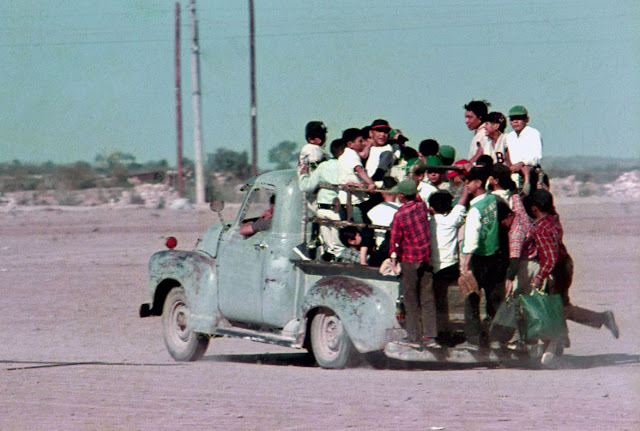 So, off we went finally making it through Mexico and to the Guatemalan border on August 19, 1967 where we expected even more trouble. I talked to the border officials explaining our purposes and presented a folder with documentation for everything we  carried, stating up front we knew that  would we would have to pay some import duties. The officials were overwhelmed, bent over backwards insisting everything was used, and within 45 minutes we were on their way to Guatemala City without having to pay one thin dime for anything!

ON TO
THE SHANGRI-LA of COBAN, Alta Verapaz 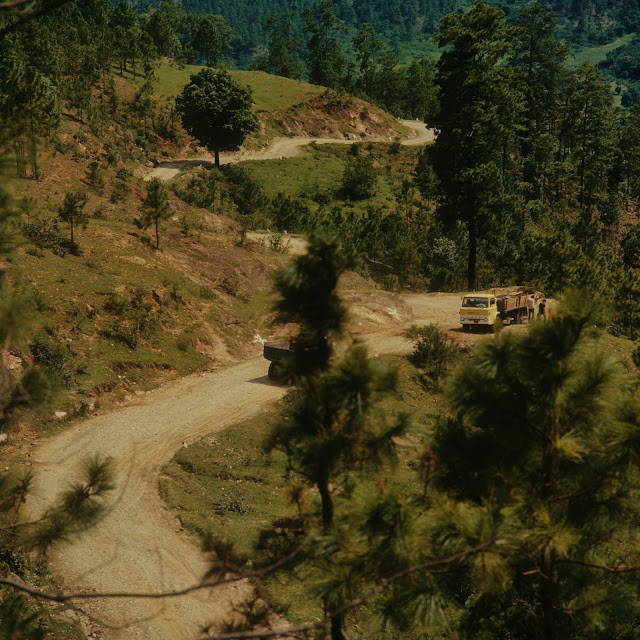 It actually took two trips to finally get the family and everything to Coban.  I made the first trip by myself, the family  remaining in an apartment graciously offered to us by Enrique Rittscher--one of the greatest men I have ever known.   On that first trip I found us a house to rent, got furniture ordered from a local carpinter, and made other important preparations.  I then got the family and a few things we would need, made the second trip and  finally we were in Coban, Alta Verapaz.
The tires had held up, but all four rims were cracked from the heavy load.  I got them all welded so they would last as long as the truck.

In Guatemala City we had gone to a lawyer to begin working on our Permanent Resident visas -- we had entered Guatemala with just temporary status.  The lawyer told me I could go to work on the first project--the traveling movie, so  within a week or so we launched that project.  As it worked out, it wasn't quite that simple, but we had to go to work, and begin hopefully creating an income to support us.

GOING TO WORK
with
CINE CHAPINLANDIA

Above on Google Earth we wee the route of the traveling movie, from Coban on the right, taking two hours to get to the first town, CHICAMAN, where below you see me unloading the frame we had to put together for the 9' x 12' movie screen in each of the 6 towns. In Chicaman we used an old abandoned Catholic Church as our theater, 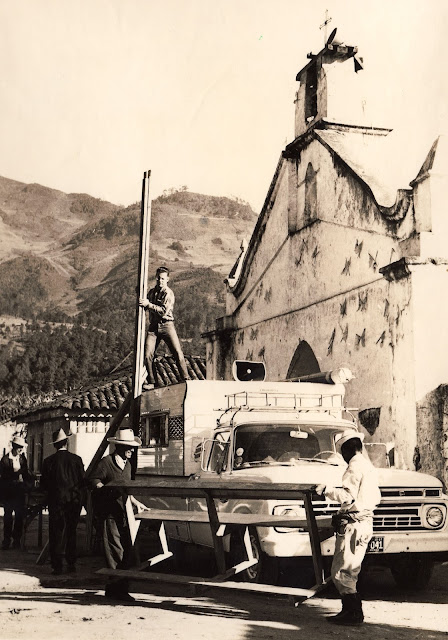 Another hour west we came to Sacapulas  where we would spend the night at the Catholic Convent with the Priests and Nuns, and when the weather was good had an outdoor performance in the patio you see below, and when  necessary used their temporary chapel--"temporary"  as they couldn't use the Catholic Church in the middle of the town as it was damaged by earthquakes and was off-limits.
We had some incredible experiences there with the priests, and especially with a very young Mother Superior, who during one movie she found me in the camper reading the BIBLE, which started an inspiring conversation. 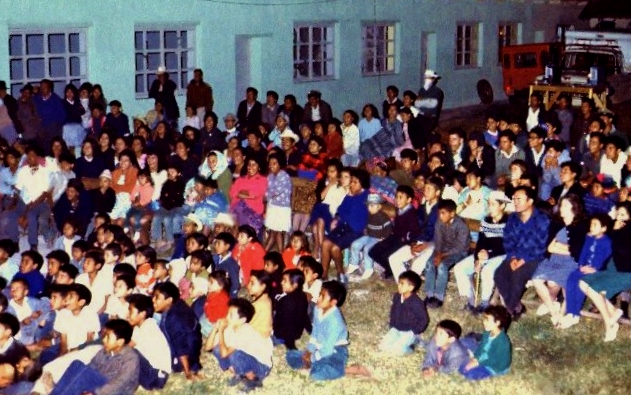 You can see above the high projection table I had made with two 16mm. movie projectors, so that there was not wait between reels.

An hour west of Sacapulas our next town was Aguacatan once again using the Municipal Hall, but with no benches.  Then we would backtrack to a pass between Sacapulas and Cunen, and there turn north going over a 10,000+ pass and dropping down to Nebaj, where our theater was the covered patio between the Municipal Offices on one side, and the jail on the other, the patio was used for basketball.  Once again, there weren't enough benches. 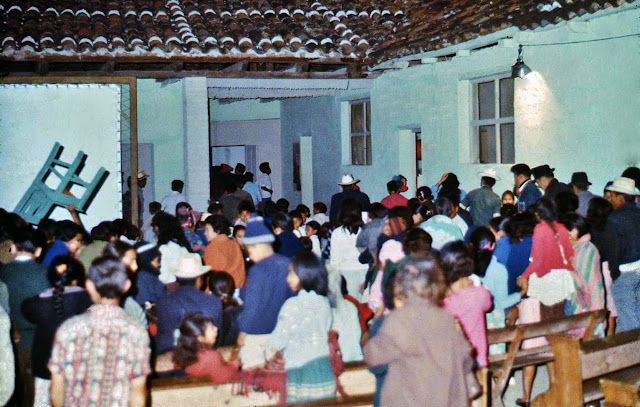 We began solving the lack of seating by each off week--as we soon had to do the tour every other week, so we bought wood, and worked cutting  it to make benches in each town.  We hauled it on top of the camper and in each town went to work putting benches together as we are doing below. 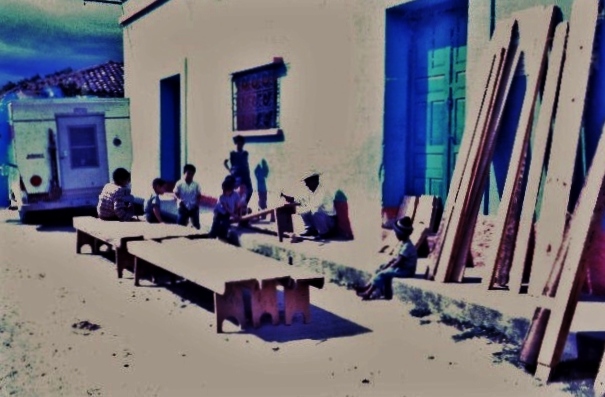 So over the months we made and left in each town benches for their municipal halls.

In each town we would show free of charge educational movies in the schools, and with the children promote the late afternoon, and evening shows:  Each with educational movies, and then a commercial one, like EL ANALFABETO with Cantinlas, TARZAN OF THE APES, and John Wayne Westerns -- as much as possible showing movies that also taught inspiring lessons.  The educational movies I would borrow from the USIS  (U.S. Information Service), and from the Canadian, Japanese, and Israeli Embassies. 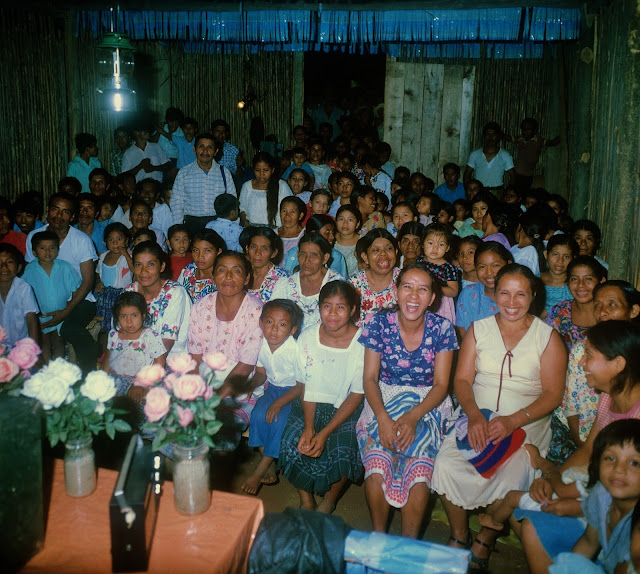 The traveling movie was one incredible experience, that eventually had my camper converted into a traveling Medical Clinic, and a Library, as none of the towns in the vast area, with 200,000 people, had medical services, nor a library (giving away pamphlets on health, nutrition, agriculture, community development, Israeli Kibutzim, etc.
But in the end, the rough roads, the wear and tear on the pickup and needed repairs each tour, had us just breaking even financially, so we had to find a property so we could at least have a vegetable garden, and get a profit producing business going, like with poultry that could in short order have profits rolling in.

In looking for such a property, we all of a sudden had Captain Penny, from Florida, look for us.  He was an orchid enthusiast and had bought a 50 acre property in the middle of what he called "The orchid capital of the world," near San Juan Chamelco, 30 minutes south of Coban.  He was just beginning to develop it into a poultry farm, when just a week after he started an emergency in the U.S. forced him to leave and unload his property with me. He also sold me a .22 rifle, that began the needed   arming of myself  which persisted during all my 35 years of residency in the country.

A bonus from Andersen Samplers, made that possible as well as to build new coops, bring in adult laying hens, and get started 1,000 chicks.  So all of a sudden I had to be a fast learner , and become the "poultry expert" of Alta Verapaz, with the first commercial poultry farm. 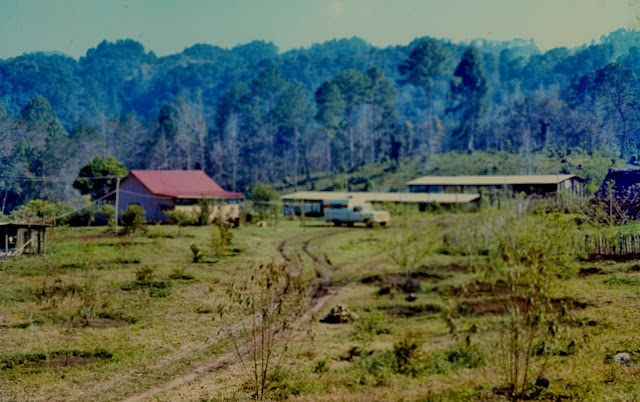 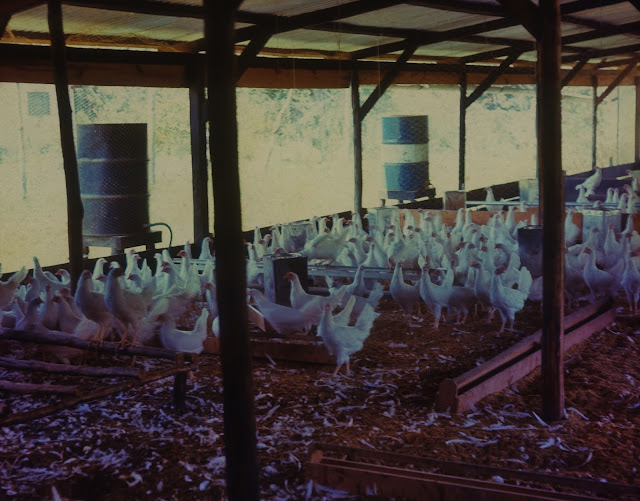 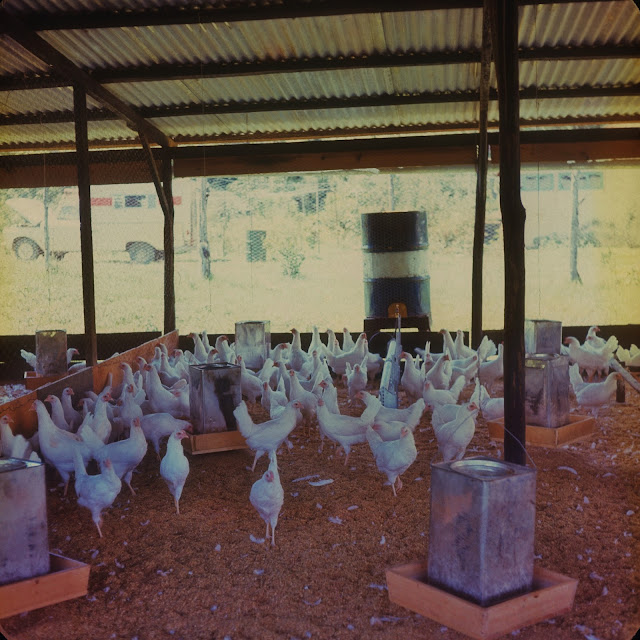 We did have challenges, first with our 300 eggs/day, and then 1,000/day, as the people of Coban didn't want white eggs--rather brown ones!  Their experience was that white eggs had pale yolks and weren't at nutritious and good tasting.  I made an emergency trip to the city, and with my newly acquired friends and poultry suppliers, got a supplement for the feed that had the yolks coming out  almost orange which I went around town breaking  open to the amazement of all--so all of a sudden we were able to support ourselves, while learning about every aspect of agriculture. 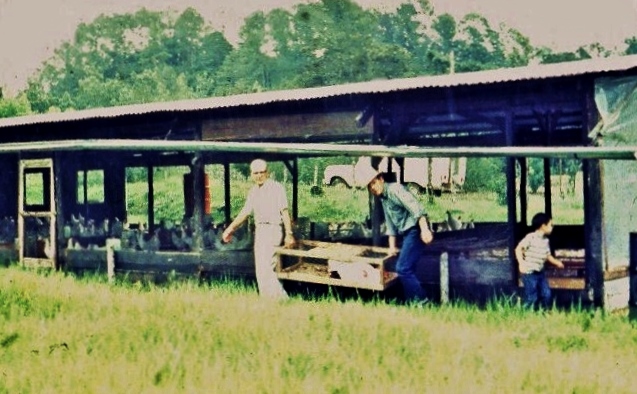 Mom and dad soon made a visit, and above dad is helping me, along with David, who was my right hand man for many years. 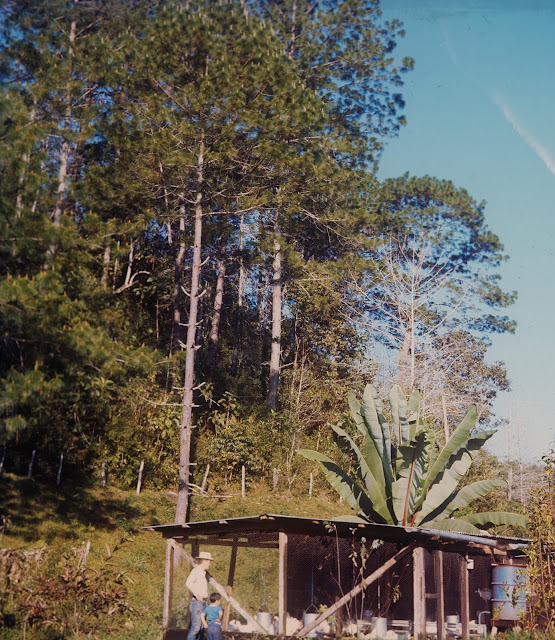 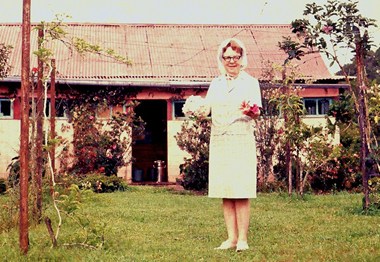 Here mom is in front of the simple farm home, we used to process the eggs, and as a brooder room for new chicks. 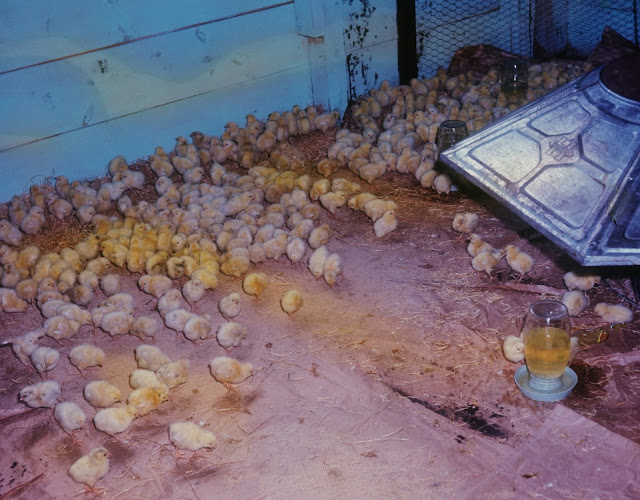 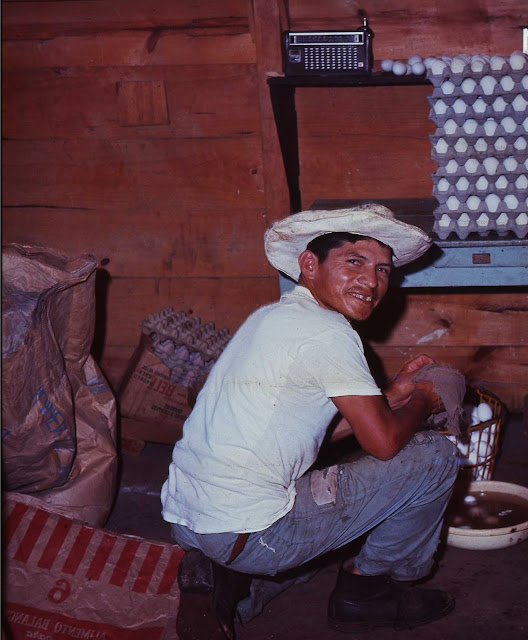 We had one employee, Manuel Ajanel, you see above cleaning the eggs.   One day  I arrived to find his wife, Julia, doing all the work and learned there was a serious problem as Manuel had acute alcoholism. 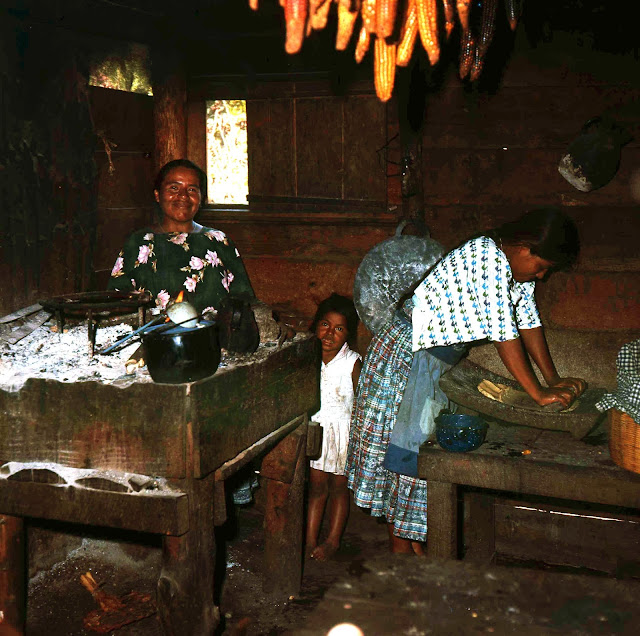 Over the years we were able to help Manuel with his problem, as he continued with us after selling the farm, as just two months after purchasing the farm, we became owners of the 600 acre Valparaiso Plantation in Santa Cruz Verapaz and for 6 months I  had to manage both, as well as the store in Coban and I was just too divided. So the farm was sold, and our cattle from there driven overland to begin our involvement at Valparaiso, which eventually blossomed into the largest dairy in northern Guatemala.

Interestingly there cropped up people who lived in Guatemala City and elsewhere in Guatemala, all of them gringos from the U.S., who felt they had to criticize everything we were attempting, saying our first failure was Cine Chapinlandia, and the 2nd was the Poultry Farm.
The truth is that both were incredible successes, both as learning experiences--like the traveling movie which we continued to do for many years showing movies of educational value all over the area--at schools, at  Churches, meetings of Alcoholic Anonymous, at jails, at LDS Stake Centers, at Cooperatives, and even at the Federal Penitentiary--EL PAVON.

And the Farm, in addition to being an incredible learning experience, was very profitable supporting us, and then sold for a profit. 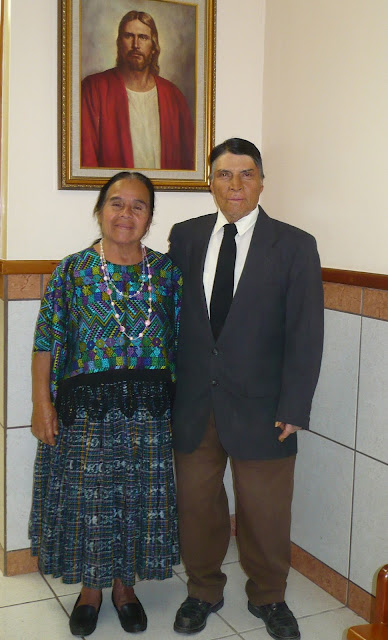 Manuel and Julia's story has been told in the Historical Review, but perhaps it is sufficient to mention that he eventually became the Patriarch  in the Coban LDS Stake. 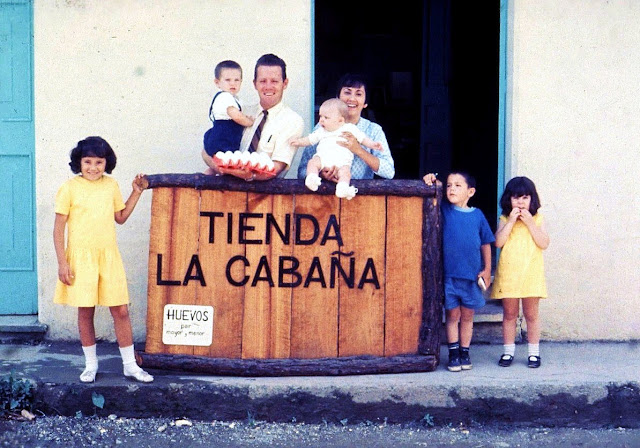