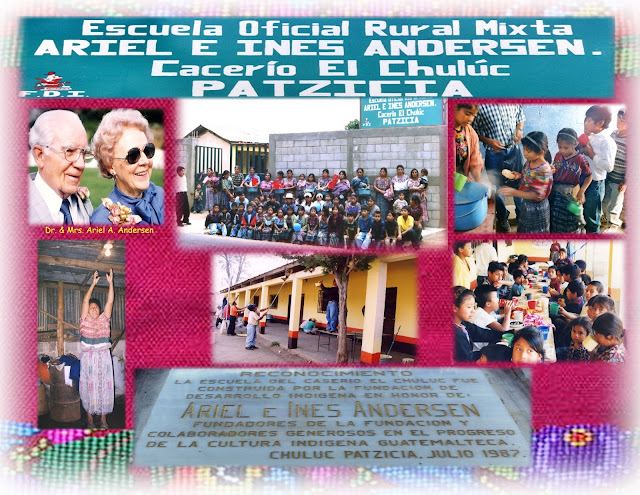 From the beginning of our involvement at Chuluc in 1986 with the construction of the school, and its evolution over the  years, including the Foundation helping the entire community with it's electric installation, and the potable water system at the school, the leader has been don Maximo we see below opening the valve to fill the "pila" with safe, potable water for the first time, when he was still healthy and in the forefront...as a volunteer, spearheading every important achievement  for his community.
Then crippling problems attacked this
kind & loving soul......thus was born our desire to help him with an electric cart...which in Guatemala was very expensive. 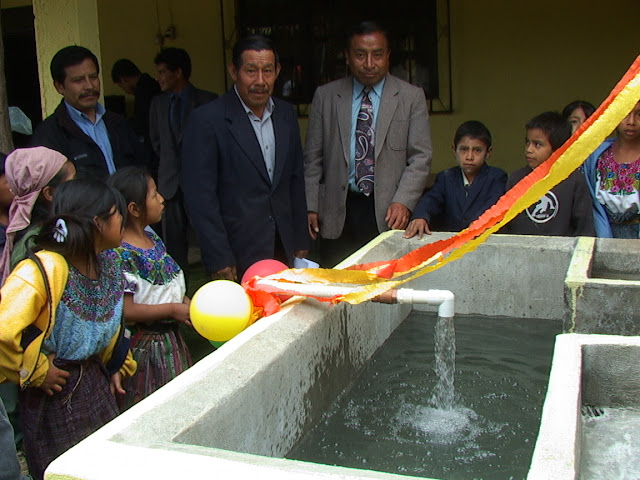 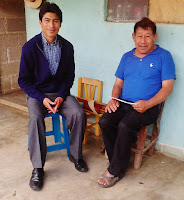 At the end of December & the first days in January...manna fell from heaven....
....so $2,800 WAS PROVIDED   FOR  don MAXIMO'S ELECTRIC WHEELCHAIR .
Thanks again to you 29 who came through with flying colors in December & one big new contributor in January!

We are thrilled beyond words of gratitude for all of you that helped make this great man's life just a little more enjoyable as you can see from the photographs below. 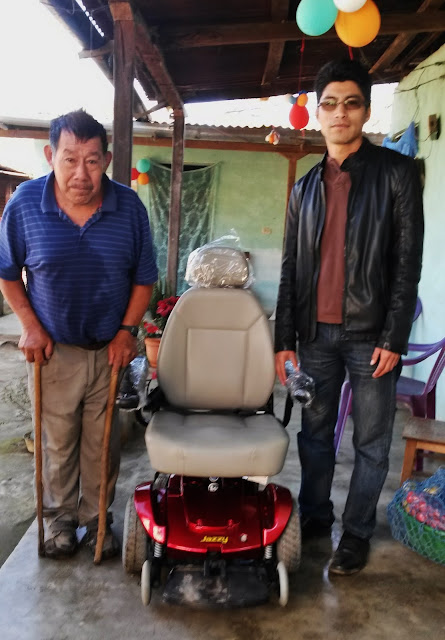 Mario presenting to him  his brand new electric cart 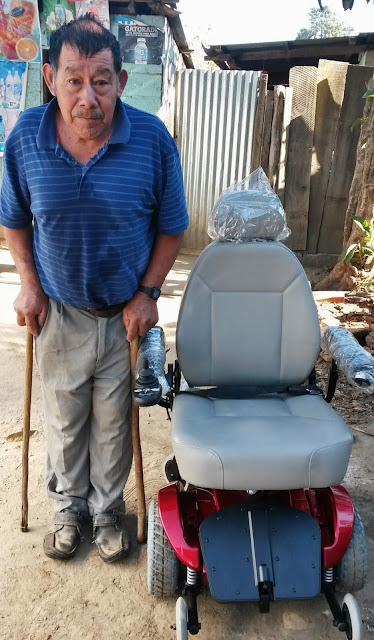 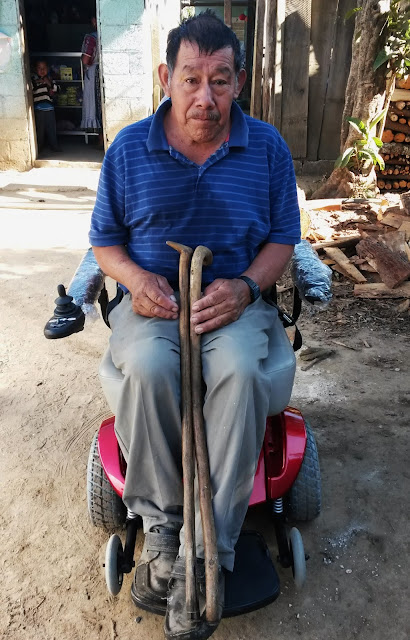 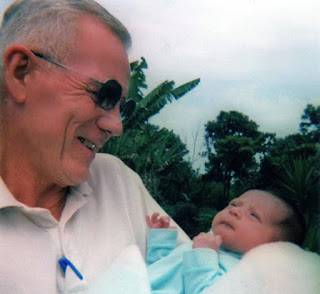 ...then Chepina recovered miraculously and with our help David is now in Junior High.  Chepina (Josefina Caal) is one of the thousands the Foundation saved during that first critical decade & raised in the Central House at Valparaiso--The Center for Indian Development:  EL CID.
THANKS TO 29 OF YOU WHO MADE December OUR BEST SINCE 2010  PROVIDING OVER $5,000 FOR THIS PROJECT! 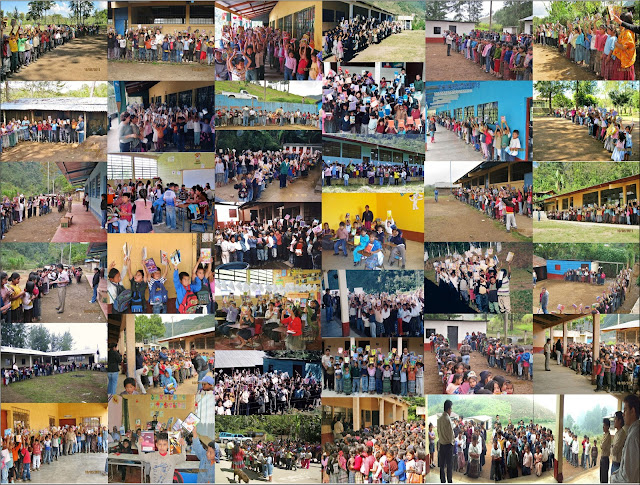 Final results will look something like this picture of the gigantic task from a previous year.....a montage of some of the 32 schools we serviced in 2015.
SPECIAL THANKS TO OUR VOLUNTEER REGIONAL DIRECTOR
FEDERICO VELIZ PACAY,
PRESENTLY DRIVING HIS 1987 TOYOTA 4x4 PICKUP WITH NEW DIESEL MOTOR, MANIPULATING ALL THE ROUGH MOUNTAIN ROADS VISITING 32 RURAL SCHOOLS DELIVERING THE SUPPLIES. HE NEEDS OUR PRAYERS.
*****************************************

FOLLOWING ARE A FEW PICTURES OF THE MANY WE HELPED IN THE
"CHRISTMAS PROJECT FOR THE POOR"
IN SANTA CRUZ
..many widows & children, orphans, sick, etc.
The Christmas tree with some of the gifts wrapped is in the home of our volunteer Regional Director, Federico Veliz, who is seen in some of the following photographs.  Thanks to him, his wife who did all the wrapping,  & to all of you donors for being the only Santa Claus for many of these needy. 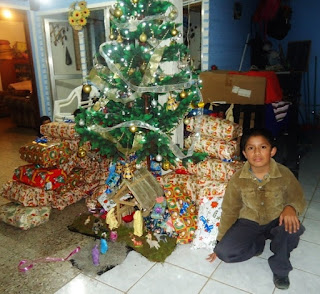 The gifts, usually a critically needed item, like a blanket, and toys for the children--who usually don't have any.  We are dealing with especially poor families, widows & grandmas raising alone children, and often times sick, orphans, and elderly alone & often crippled. 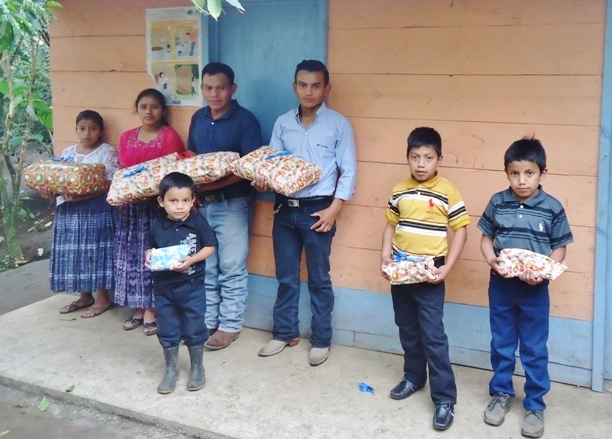 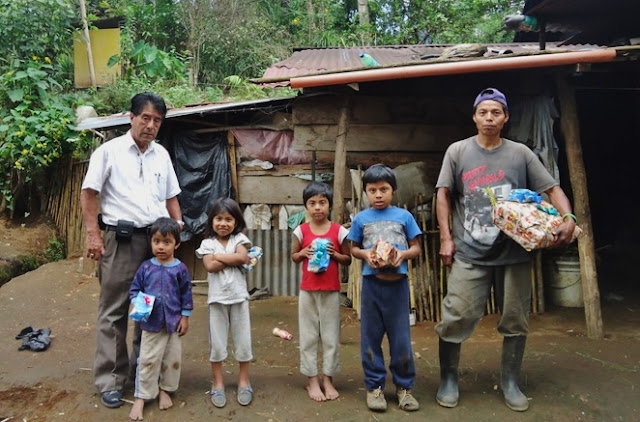 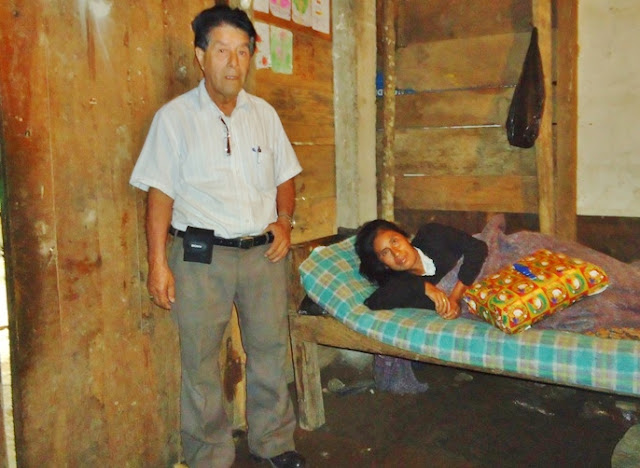 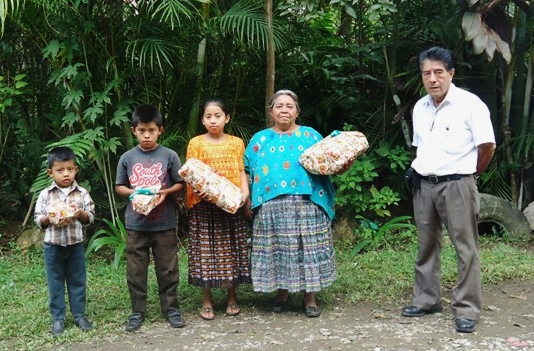 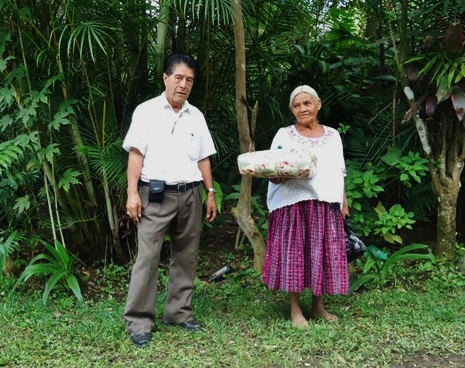 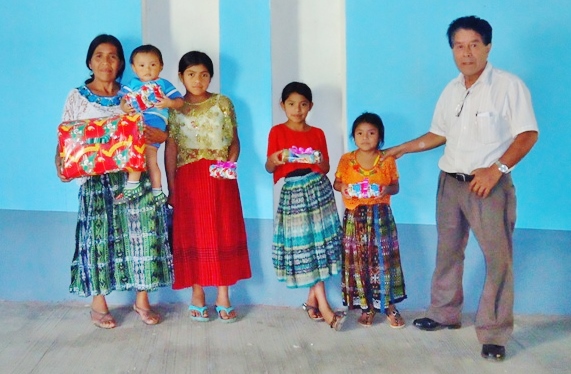 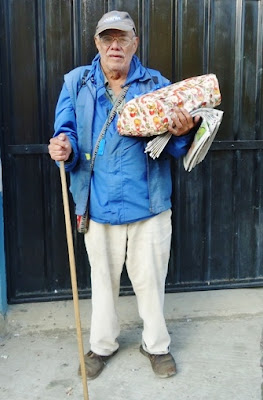 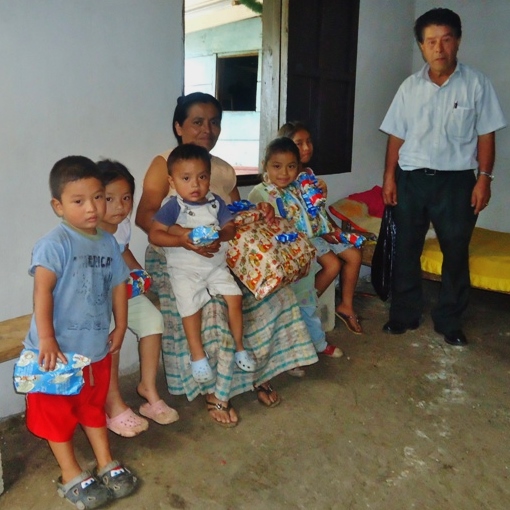 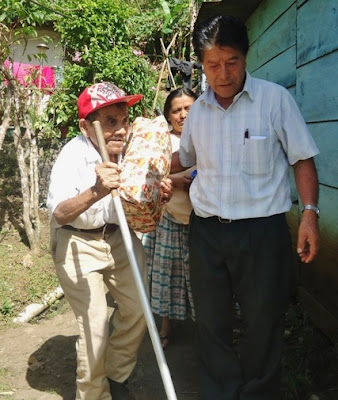 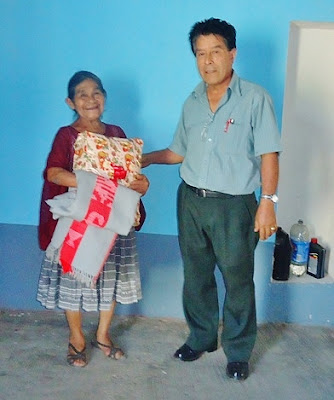 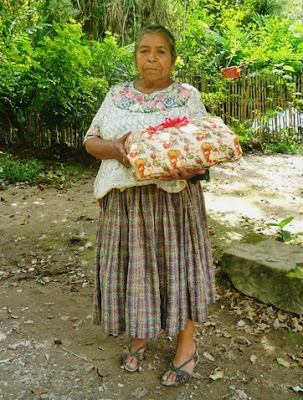 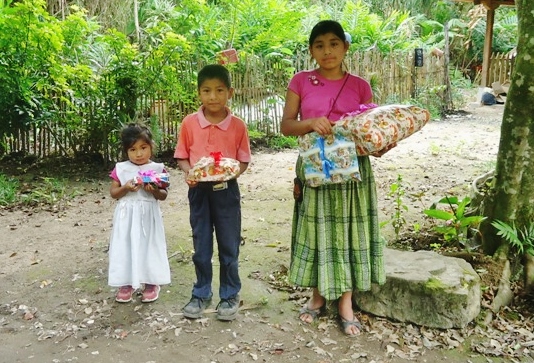 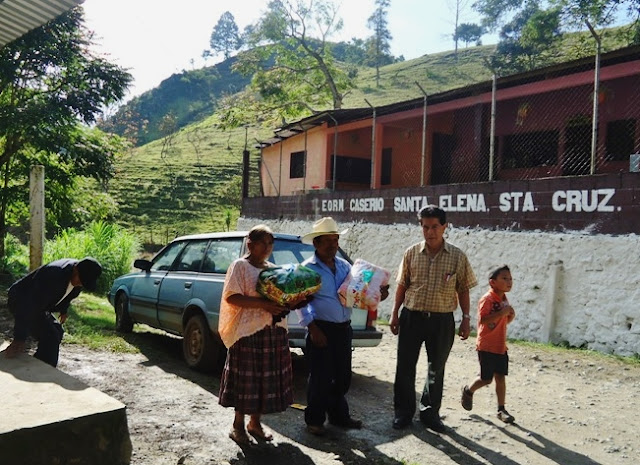 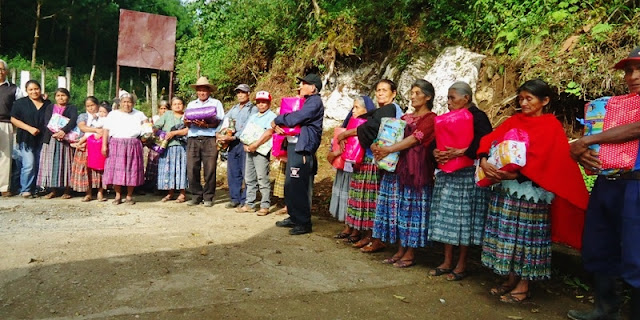 Above,  the most needy in the Chiquiguital Village in the remote mountains of
Santa Cruz Verapaz where two years ago we built additional classrooms for their school, plus sanitary facilities. 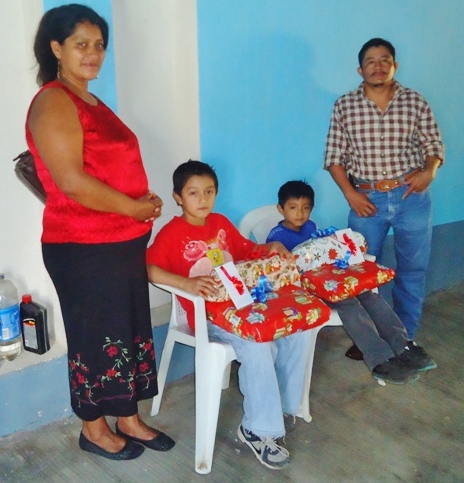 All the younger students with their newly received educational supplies--including workbooks rarely if ever received by rural students. 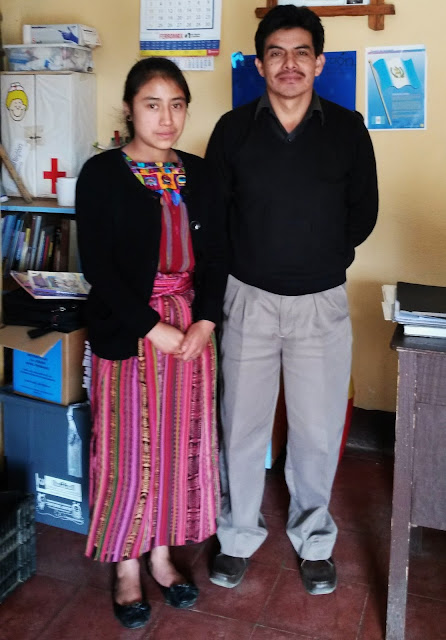 We introduce to you the new Cakchiquel/Mayan teacher, whose wage we will be paying during 2016.  She is CARMEN ROSALIO RAQUEC, 21 years old from Patzun, who will be teaching 1st thru 3rd grades.   She is seen with the Director of the school who we see below along with our volunteer Regional Director, Mario de la Cruz. 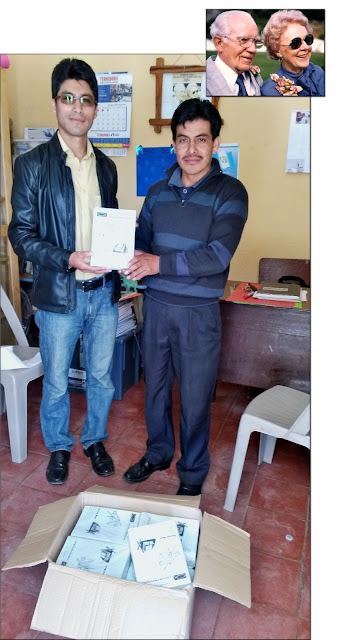 Mario is presenting to the Director the school educational supplies donated by the Guatemalan Foundation for all the students.  We see peeking at the scene, over the head of the Director, Dr. Andersen & wife, Ines,  in whose name the school was constructed in 1986-87....they are in the rustic picture frame which we can't see well, so I've inserted the same picture of them, looking down from on high and pleased with what's being done in their name in the Hamlet ("Caserio") of Chuluc,  Village ("Aldea") of La Canoa, Patzicia. 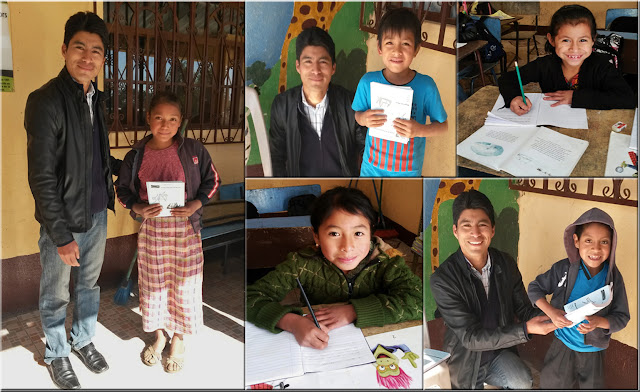 Of course all the students received supplies....here are just a few of them.

Thanks to one donor,  we have covered for the year all the basic expenses of the school, and for Mario's scholarship for his last year in Law School, but we will need extra donations for any emergency needs at the school and in the village.

ALL OTHER DONATIONS WILL BE FOR THE PROJECTS IN SANTA CRUZ VERAPAZ....SO PLEASE HELP ALL YOU CAN SO, WHAT MIGHT BE OUR LAST YEAR,  WILL BE A GOOD ONE FOR SANTA CRUZ....WHERE ALL THIS HALF CENTURY OF WORK STARTED. 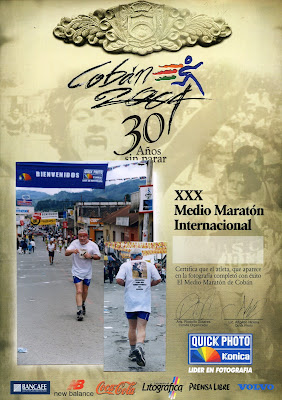 The successful flurry of donation activity at the end of 2015 is making possible the foundation doing something that was one for quite a few years, after we returned o the U.S. in 2002, but not possible in recent years.  I'm referring to an "INSPECTION TRIP" to Guatemala each year, which also made possible me participating in the Coban International Half Marathon in May--completing 14 consecutive years of competing against the Kenyans, Ethiopians, & Moroccans.
That's of course a joke….but I did always make it to the finish line.
The race has grown incredibly from 2,500 runners to now around 15,000, an incredible sight of color filling the narrow streets of Coban.
I will represent the Guatemala Foundation and be the oldest, at 80, who is a "cancer & heart attack survivor," with  3 screws holding together his "football ankle,"   titanium jerry-rigging his "motorcyle knee" and a titanium hip…..and will have the Kenyans quaking in their running shoes!   Likely, "Quaking" with laughter!
I will be able to say "hello and goodbye" to all of our thousands of brothers and sisters, who we have served to the best of our ability, and return with video and photographs to produce an interesting YouTube video, or two, as well as a few interesting newsletters to make  complete our.....
GOLDEN ANNIVERSARY YEAR

THANKS FOR ALL YOUR HELP FOR SO MANY YEARS.  PLEASE HELP ALL YOU CAN...TO MAKE POSSIBLE ONE MORE GREAT YEAR!

Posted by Guatemalan Foundation at 11:08 PM