Event #4: YouTube Video--folllowed by Photo/Essay... A SURPRIZE LUNCH of GRATITUDE FROM "THE GIRLS" for the FOUNDATION & DONORS

Click here for PREVIOUS POST
****************
EVENT #4: YouTube video, followed by an album of photos of families
A SURPRIZE LUNCH of GRATITUDE FROM
"THE GIRLS" \
for the FOUNDATION & DONORS
Note:  The speeches given by some of the students are in Spanish, but otherwise captions are in English & Spanish.
They were at the Central House when the Guerrilla War heated up in 1981 & I took my family back to Provo. There was a threat the Central House would be burned down and so we had to place everybody somewhere safe.
The "girls" were taken to Guatemala City with dear friend, Amalia Contreras de Ramirez, who accepted responsibility for them. We built bedrooms & a bathroom on the roof of her home--one being my room & office.  We financed them studying there for two years  until the "war" calmed down and we were able to move back to Valparaiso in 1984.

On Sunday afternoon, May 22nd, I was invited to a lunch at the home of one of them, Olivia, and on arrival was surprised to find it had been planned by all the girls, most of  whom were there with spouses, children & grandchildren.
The opening photogaph of the YouTube video shows:
Maria Elena, Chepina, Moncho behind, Gloria, Olivia & Laura.
Two of  the "girls,"  we helped back between 1981-84 survive the Guerrilla War, were unable to attend.  They were Macaria & Josefina.

Here's a picture of the "girls"  in 1981, with Gloria missing.  Amalia, who accepted responsibility for the girls who lived at her home, is seen behind them. 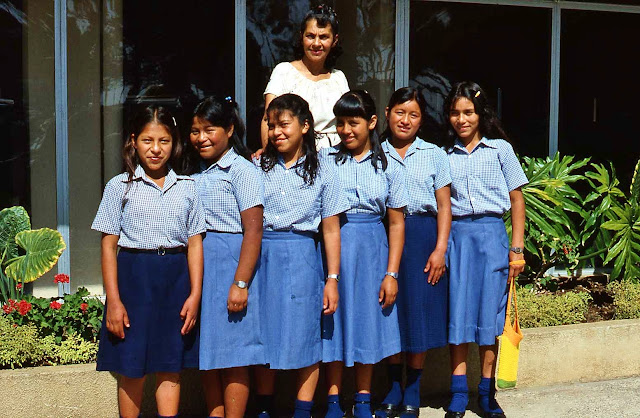 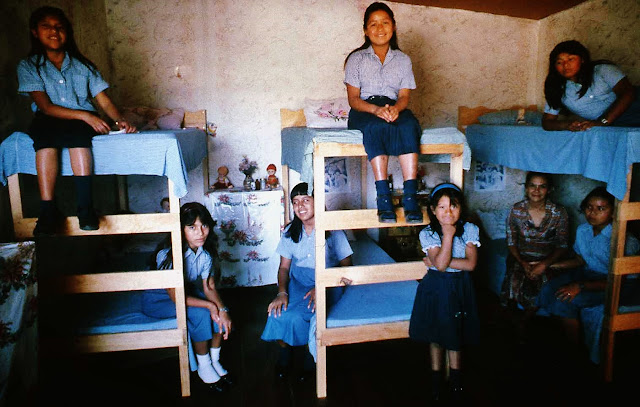 NOTE:  Sorry for the less than optimum quality of the photos & videos, but not realizing this was a big event, I only had my little point-and shoot camera & the strong background light made enhancing many of the photographs very challenging if not impossible. 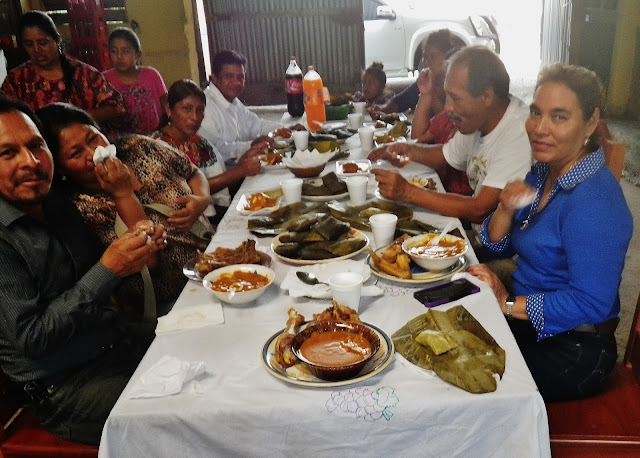 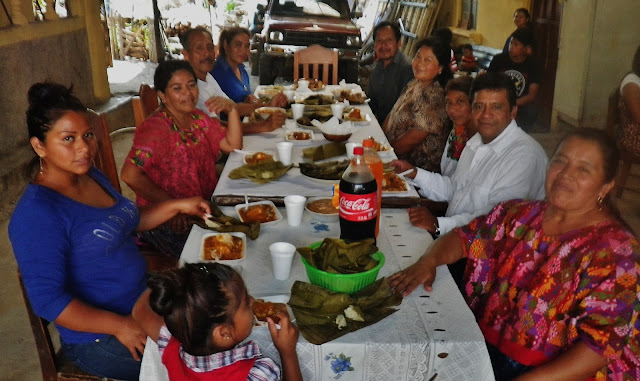 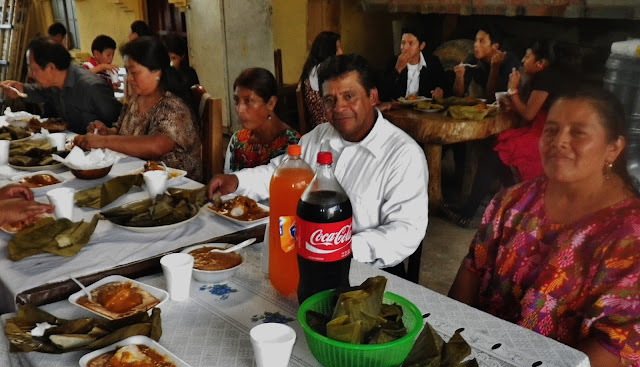 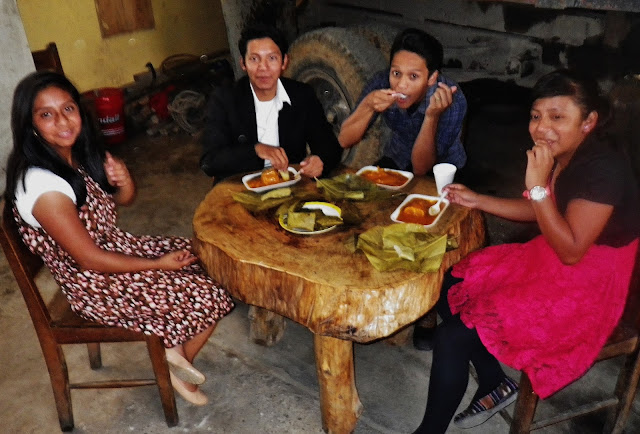 Moncho & Gloria's children, minus the one on an LDS mission in Mexico. 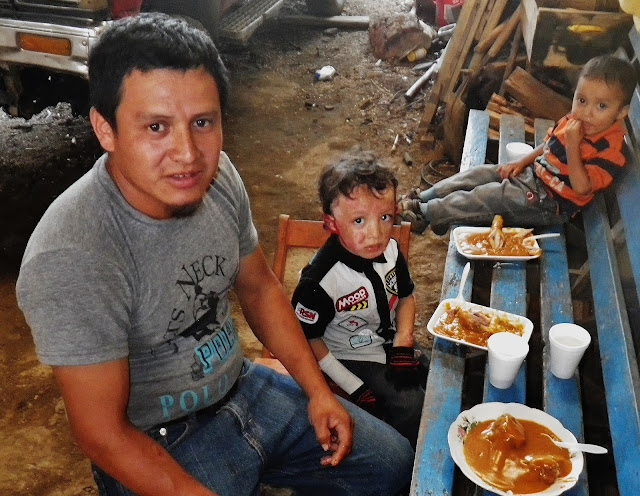 Olivia & Crisanto's son & grandchildren.  Their grandchild seen here was burned in a horrific fire and is under treatment..  We should remember him always in our prayers. 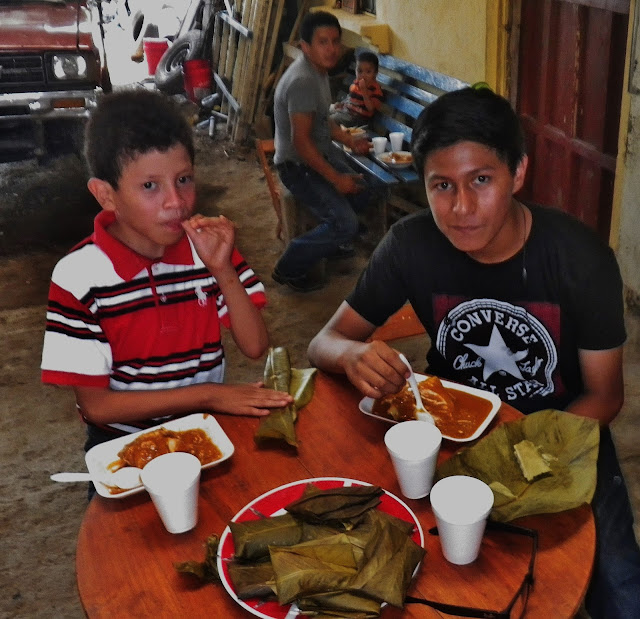 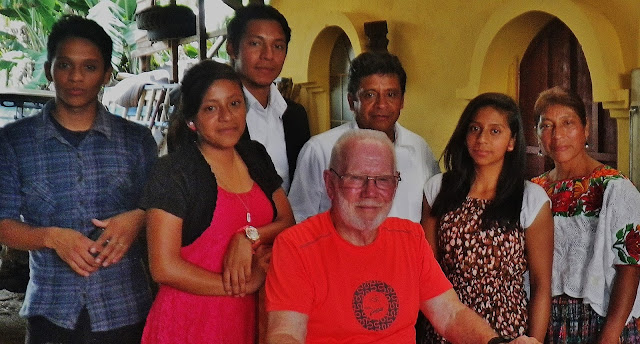 Moncho & Gloria and their family, with one missing.... on an LDS mission in Ciudad Obregon, Mexico
Do you remember Moncho? Here's his famous picture below. 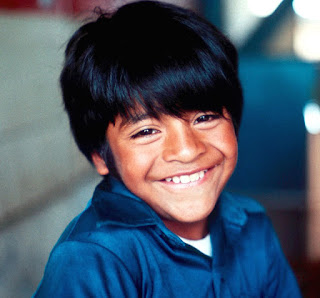 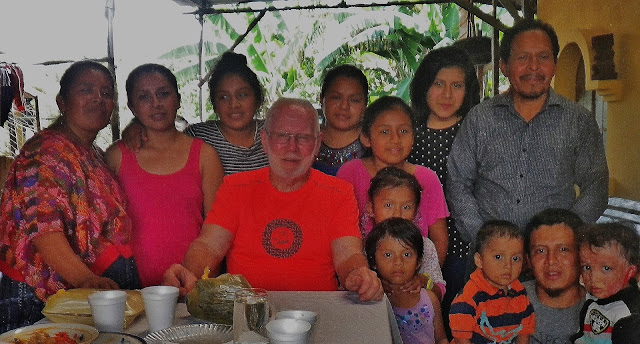 Olivia & Crisanto with children & grandchildren
I'll insert below the first picture of Olivia when having come to live with us at the Central House in Valparaiso. 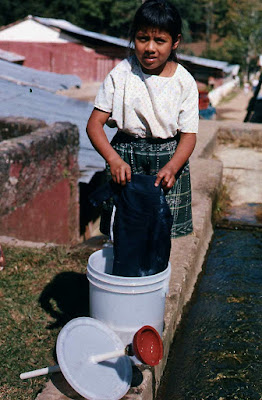 Here she is with our first....almost...automatic washing machine.  By the way in my tiny mobile home, I still wash my clothes with one of these!

Below is a 1977 photograph of my "vocational student" Crisanto, when he & Pablo Cal became the first two Full-time, short term LDS missionaries in the entire country. 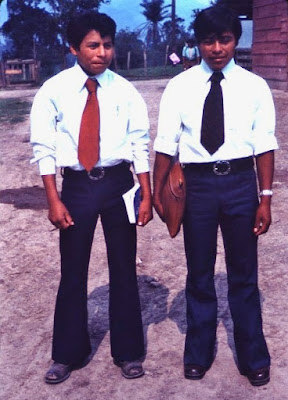 1977 as missionaries. They were keys in beginning.  the extremely successful missionary work for the LDS Church in Chulac and the Polochic area as outlined in the Historical Review 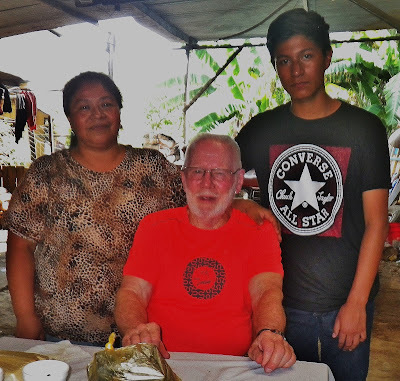 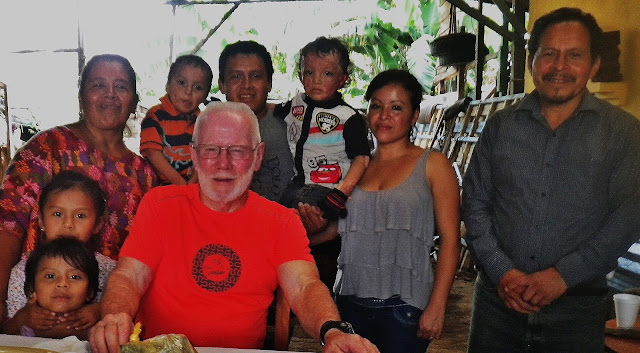 Another picture of OlIvia & Crisanto, this time with a daughter-in-law present 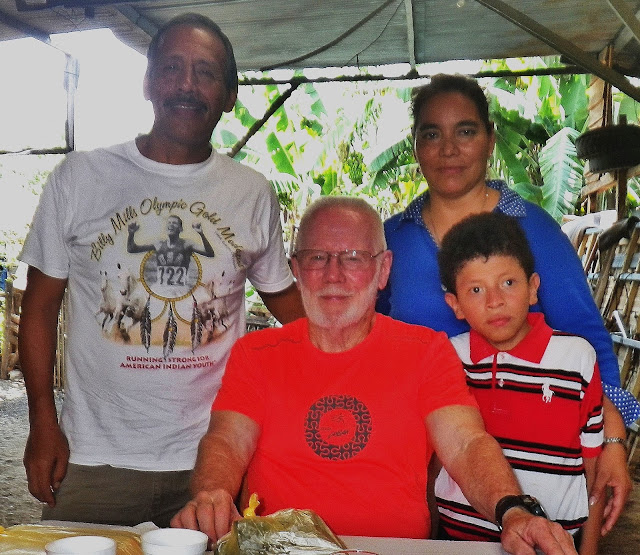 Here Maria Elena is, mother of our three boys, Cordel Ammon "Lito,"  Jesse, & Nephi, and on the left Edgar Pacay (Yalibat), Lito's father-in-law & Diana's father. Lito, Diana & daugter, Rebeca, live in Worland, Wyoming.  Jesse lives in American Fork, Utah....where I live in my small mobile home  parked there  during the winter. Nephi lives in California.
If you didn't know, our marriage ended in 1994 when I became a Mr. Mom for the next 20 years raising the boys, and my two adopted daughters, Aura & Mahana.
Below we see Maria Elena in the last years at Valparaiso with one of her several projects....A PRE-SCHOOL FOR THE LITTLE ONES at Valparaiso 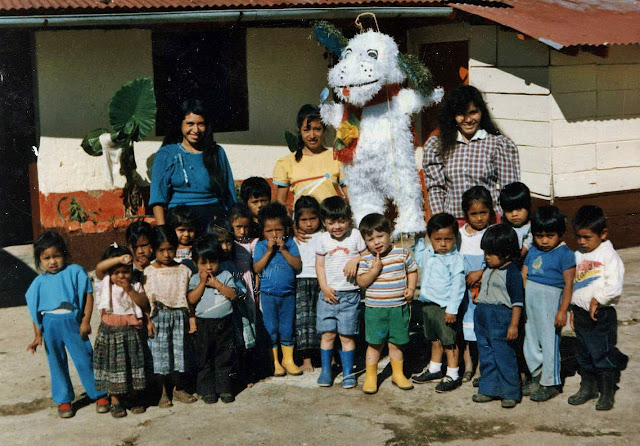 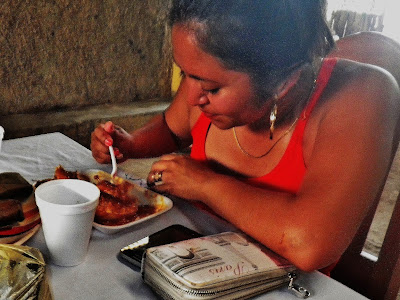 Aura Andersen, my adopted daughter, came late, but in no way was going to miss her "Cacic!"  Aura lives with Chepina in Coban.  She is in her last year to receive a Master's degree in Social work, after which she will join the family in the
U.S.
Below is a picture of Aura when the death spiral was overcome and she became a special child. 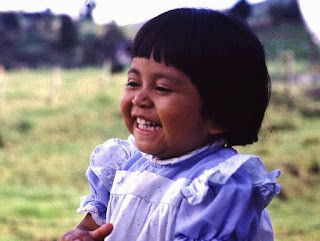 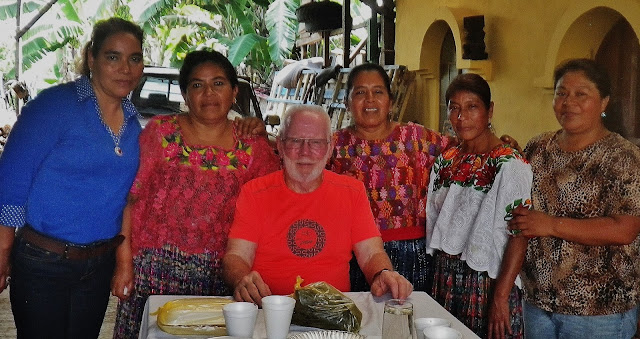 At the "Reunion"  the girls remembered some of the great times during 1981-84, especially when they sang and danced on top of a water tank in the CHUINIMACHICA VILLAGE above Lake Atitlan....seen in the following photographs. 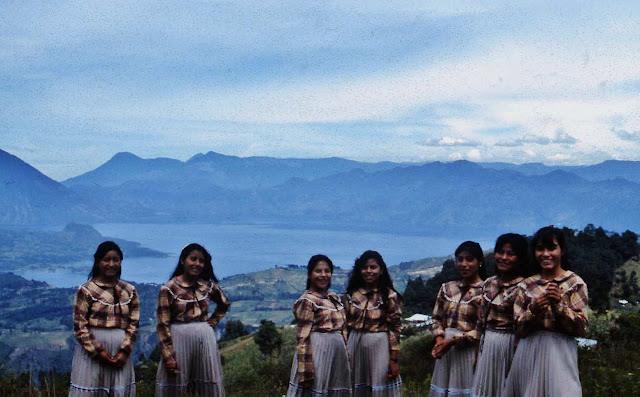 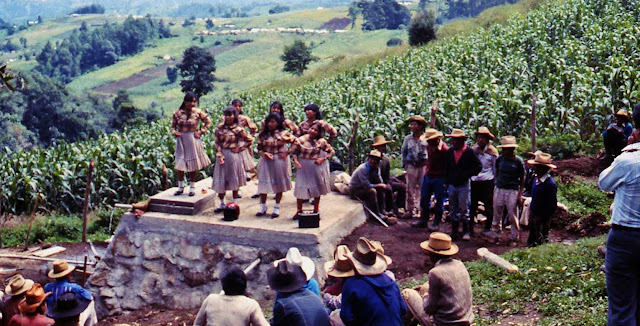 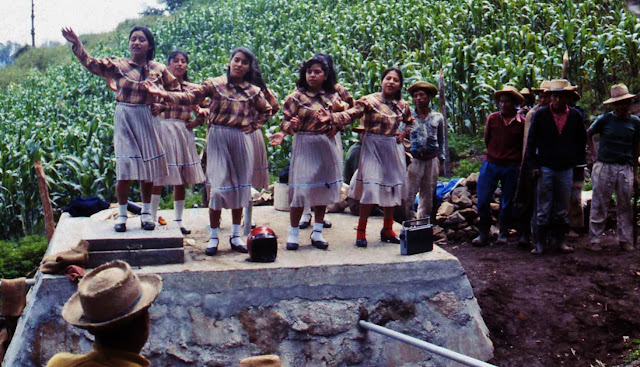 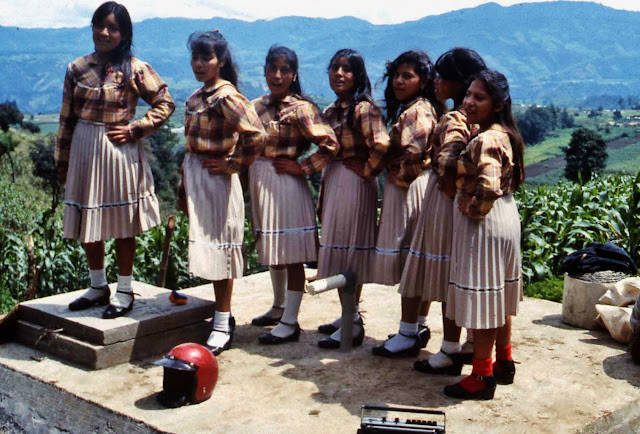 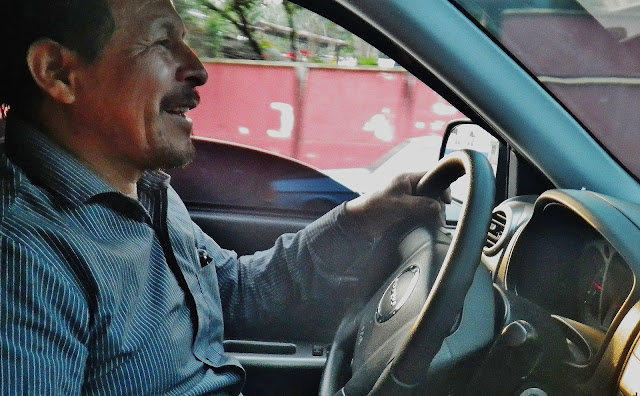 Crisanto gave us a ride back to Chepina's after the luncheon.  His new 4x4, diesel pickup is an Isuzu which I don't recall seeing in the U.S.  Other pickups seen in Guatemala I haven't observed in the U.S. are Mitsubishi and even VW. Pickups are big in mountainous Guatemala. 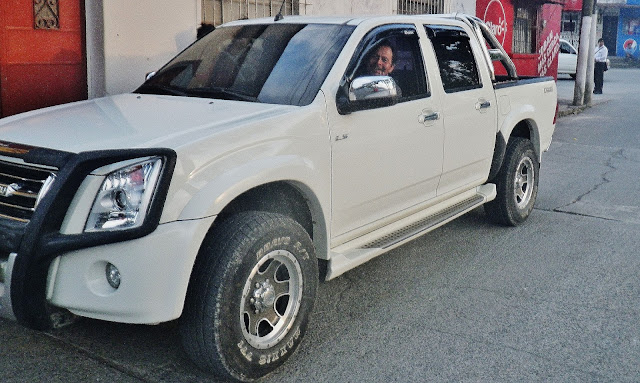 Crisanto owns his own very successful business, hauling timber products, and doing road construction, working in partnership with his son.
For example: He has built roads in the Chulac Plantation area in the Polochic Area, and also done work building some of the many new roads you will see on the Valparaiso Plantation--in a rebuilding and renovation project you will see in EVENT #7--which you won't believe!

To say the least I am very proud of many of those who were once my "vocational students," then employees at Valparaiso, who have gone on to be quite successful.

NEXT UP:
EVENT #5: Monday, May 23rd:  Special festivity at the Valparaiso School & typical lunch.
In this event you will see another of my first "vocational students,"  who went on to be a successful plantation owner--whose property we will tour in Event #8.  I'm talking about Miguel Angel Ortiz, who I have sometimes called my "first student"  who after a year of me teaching him to drive, work with poultry, hogs, cattle, do accounting,  & more, became the Manager of Valparaiso.  He gave us a ride to Event #5....might as well insert him here: 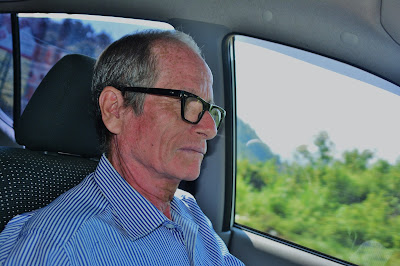 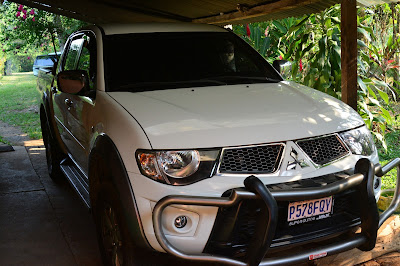 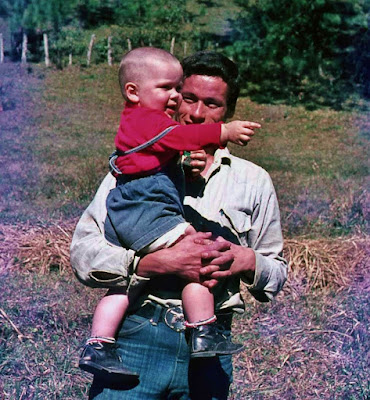 Might as well remind you of him back in the day....like 1969, with our first Guatemalan born son, Joey, in his arms.

Posted by Guatemalan Foundation at 1:16 AM