Chulac and The Polochic Valley

THE AWAKENING OF CHULAC and THE POLOCHIC VALLEY

In 1976 one of Cordell's students at the Valparaiso CID (Center for Indian Development) had an opportunity to talk to the 5 native Kekchi directors of the Chulac Plantation Cooperative, located in the Municipality of Senahu. The student was the little ragged boy they began calling Pedrito, but now grown up who you see below. 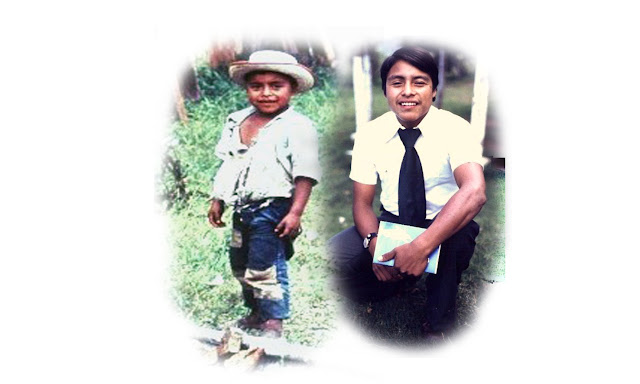 Chulac was a coffee plantation established by German immigrants to Guatemala in the late 1800's and early 20th century in a very isolated mountainous area of Alta Verapaz in northeastern Guatemala. Then at the time of World War II the loyalty of Germans in Guatemala was in doubt and many properties were confiscated by the government and the owners sent back to Germany, or to concentration camps in the U.S.  Chulac was one of them taken over by the government.  Years later the Indian residents were organized into a cooperative, becoming the owners, but with a government appointed manager. 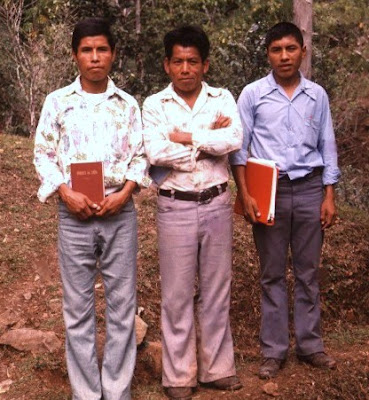 Pedtrito  talked to the native directors about the Philosophy and Principles of the Good Life and the religious aspect that dealt with their legendary sacred book that was believed to have been lost anciently but now found.   They returned to Chulac excited about what they had heard.    A week later the manager who knew Cordell told him something was stirring in Chulac and suggested he go check it out.

Consequently in mid-1976 Cordell got a team together to make the 5 hour trip over rough roads using the Foundation's 4 x 4 Dodge Power Wagon, and carrying a portable generator, movie and slide projectors, prepared to show them what the Good Life was all about. 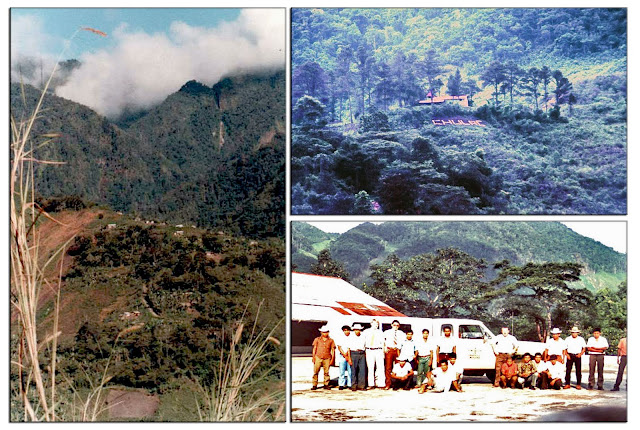 The team arrived late, but got the word out.  Then the rain came, but nevertheless a large group of around 130 came to see a slide show on what their leaders had told them--The Philosophy and Principles of the Good life and their sacred book. The reception was extremely positive and they were invited to return, but on a Sunday when the meeting would be in the Catholic Church.  It turned out that the 5 co-op directors were also catechists who performed the mass.

On the next trip the team arrived on Saturday and spent their time being taken to the homes of many sick.  Cordell performed medical treatments.  His companion, Gustavo Ramirez, did the dental work.  Cordell's daughter, Cristina, and a friend, Judith Ovalle, became part of the  team making the trip to Chulac, Cristina working with the children;  Judith  with the women. You see them  below.   They, along with all the others made great contributions. 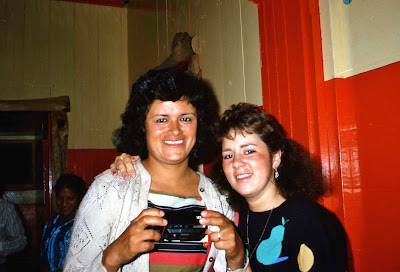 The next day, Sunday, the Catholic chapel had a full crowd of around 400. Thr project moved forward with incredible results.  The picture below on the right shows a crowd viewing outdoors on a cemented patio the movie "THE TEN COMMANDMENTS" that over a week of frantic travel was shown to 10,000 Guatemalans. 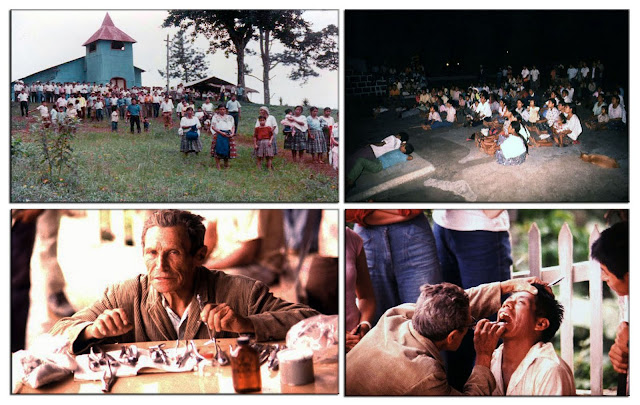 The team began teaching the people where sickness came from, and eventually went through the system of growing and showing them the "invisible monsters" that were causing all the suffering.  See:  Teaching Cleanliness.  Next up came the task of teaching them the importance of nutrition.  See:  Nutrition.


The trip was usually made every two weeks.  The other week at that time period was being spent in the Patzia-Patzun-Comalapa area of the Central Highlands with projects in the aftermath of the earthquake that killed 23,000 Guatemalans.  The days in between were at Valparaiso keeping the business and projects there going.


In Chulac, with 2,000 residents, NOT ONE FAMILY THERE HAD AN OUTHOUSE AT THAT TIME!   Soon the people at Chulac were convinced of the importance of having an outhouse, and one of the Saturday activities was to make outhouse floors and seats.  They used a tropical wood so durable that holes had to be drilled to be able to drive nails.  This wood is today found in Mayan ruins thousands of years old.

There also arose the need of a community meeting hall.  The Indian directors chose a piece of land for the project.  A solution was suggested by the Foundation that offered to purchase the construction materials.

By that time the full-time employees and students at Valparaiso had organized themselves into a cooperative, and with profits their first year had purchased a diesel truck.  Materials were bought in Guatemala City and the co-op truck picked them up and made the slow and rough trip to Chulac along with a team from Valparaiso to help in the construction.  Within 5 days the structure was finished and ready for use.  While that was being done, others from the Valparaiso CID team, and those from Chulac, were using Foundation tools to construct furniture,  and begin constructing the first outhouse floors.

By 1979 around 54 round trips had been made to keep the project going.  Much was accomplished, many lives saved, and the corner stones laid for a better life for the more than 2,000 residents of Chulac.  As it worked out, that was just a beginning as what started at Chulac spread to many other areas.

Above, to the left, we see Arturo Coc, Chulac native who requested spending a year at the Valparaiso CID as a student along with two others.  Later after his return he became the first full-time LDS missionary from Chulac.  Next, there he is 30 years later with his wife.  The 3rd picture is Juan Carlos Maaz as a child when the work began in Chulac, and last, there he is with his parents, another of quite a few LDS returned missionaries from Chulac.
Then there was the Saxsuja Plantation with what they learned was the largest  rural Protestant congregation in Guatemala. 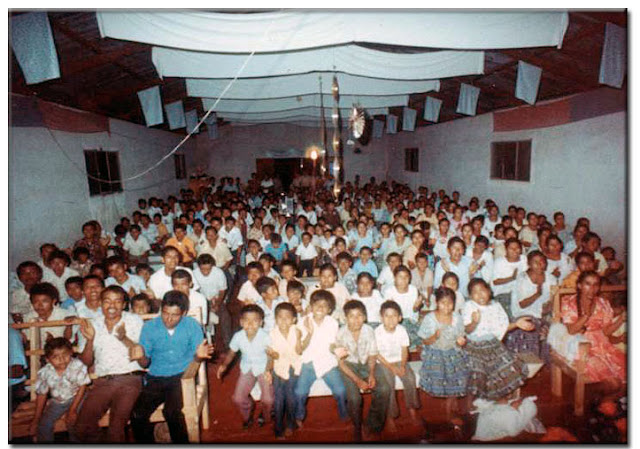 On the first trip to Chulac Cordell noticed along the road their huge chapel full of people.  He stopped, walked in, introduced himself as the "Director of the Foundation" and their "brother," and was embraced by Pastor Pedro Tiul, and the Church of the Prince of Peace. He was invited to preach in their meetings and over the next couple of years through sermons, slide shows, and movies taught them the Philosophy and Principles of the Good Life for an average attendance of 600 (high was 800, low 200).  Additionally he and Dr. Carl Jacob installed electricity in their chapel, pastoral house, and school. The leaders from there in turn took Cordell to other congregations deep in the mountains.

The effects of this project are far reaching to say the least, as are those at Chulac and Senahu.


12 YEARS LATER--BACK TO CHULAC
Twelve years after the Foundation helped in projects at the Chulac Cooperative Plantation, a request came again from the Indigenous leaders.  Many improvements had been made over the years there, but the women hadn't learned to speak Spanish, much less learned to read and write.  Most of the men were in the same situation, and the only school was a long hike for their children.  They needed schools.  So for a couple of years the Foundation again went to work making the long, rough trip. 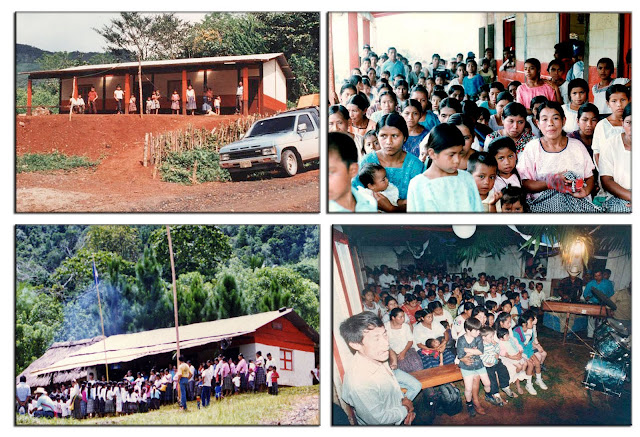 They started building a school in the Seococ Village area of Chulac you see on the upper left, followed by a picture of a large meeting with the residents of that area. Then they learned that the other side of the mountain also needed the same, so went to work in the Sajonte Village of Chulac.  On the right is a celebration with light provided by the portable generator we donated to the school, along with a T.V. set and VCR, including videos made by the Foundation.

LAST NOTE
From time to time the Foundation gets cell phone calls from leaders in Chulac who explain that there are no employment opportunities there.  Cordell has always said he would like to return and help them find solutions, for example an alternative crop, but we would have to have significant funding to be able to launch a new initiative there.  If you are interested in helping, let us know.

Posted by Guatemalan Foundation at 10:49 PM