The Najquitob Village School since 1968

HIKE UP THE MOUNTAIN
In 1968 Cordell was advised of many sick and dieing children in the Najquitob Village, 2 miles up a slippery trail into the mountains south of Valparaiso (Paradise Valley).  In a census he had taken at Valparaiso he learned that 4 or 5 little boys from Valparaiso sporadically attended the government school in the village.  So when a parent with a very sick child came and begged him to make the hike, off he went. 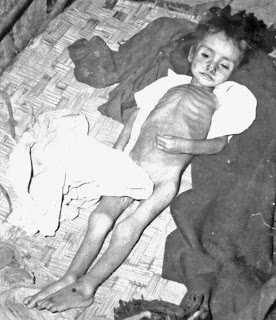 He got there too late to save the child.  As happened so often in those first years the parents would first try their local remedies, then resort to the local "shaman" or medicine man, and when all was failing would come to Cordell.  Sometimes it worked, but too many times it was too late.
On that first hike he visited the government school and took a few photographs that somehow over the years have escaped being ruined by the fungi that usually ruins quickly things like slides.  We see below the government school.

There were two teachers, and about 15 students--no girls.  The  school was constructed exactly like their homes:  Mud walls, and dirt floor.  No windows. The male teacher was Zoel Gomez who later was employed as the first paid teacher at the Valparaiso school. 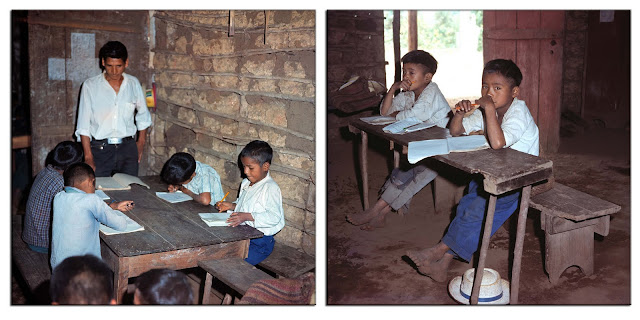 The project to help the Najquitob Village was on--and quite a challenge, while at the same time it was a daily struggle to try and solve the life and death problems down in the valley--Paradise Valley.
In the first 2 years many more hikes were made up the slippery trail to Najquitob to treat the sick.  Another was to pursue and capture the members of a "family mafia" that was able to influence some of the children taken in at the Central House and were stealing.  Two adults went to jail.  The 3 children were given to Cordell by the Justice of the Peace and remained under a sort of  "house arrest" in the Central House.
Several other trips up the mountain were made in armed pursuit of Ladino cattle rustlers that were finally captured and sent to jail.
Eventually, about when the Foundation was organized in December 1969, Valparaiso and the people of Najquitob dedicated themselves to the task of building a 4 x 4 road.  With that done work began on building a school--first two classrooms, and then another.  By 1980 another one was added on, along with a 3 hole outhouse.

By then there were 80 enrolled with about 50 children attending, including quite a few girls. The years rolled on with continual cooperation helping the village evolve.  By 2004 there was need of a much larger facility and so we all went to work helping.  By then they had a much improved potable water system, and INDE, the government agency had installed electricity to the village.  The road the Foundation and the Plantation helped build had been improved and even a very small used school bus from the U.S. made the trip to the village twice a day. 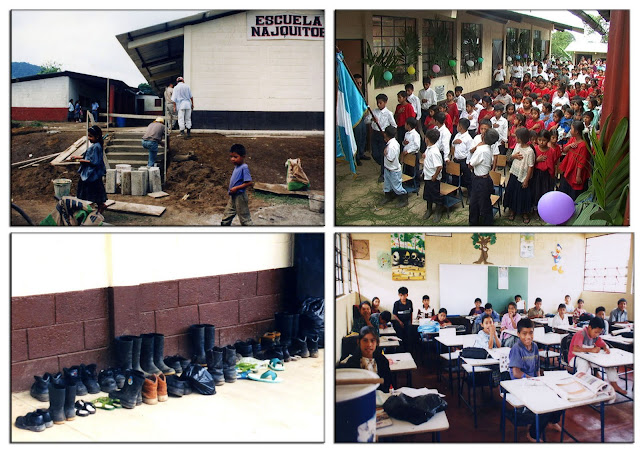 The next step was to replace the 25 year old 3 hole outhouse with flush toilets and a septic system--the first in the village.  At the same time we cooperated with the village to build them a new kitchen that was needed desperately for the exploding population that is around 400 to begin 2011.

Below is an incredible scene--3 of the 10 teachers having lunch in the kitchen. Two of them, plus one of the male teachers are from Najquitob, graduates of the school you have seen evolving.  They went on to become certified teachers and are back serving their own people.  Go back and compare this with the beginning. If you aren't amazed and excited about helping more, we of the Foundation have failed at painting this wonderful picture. 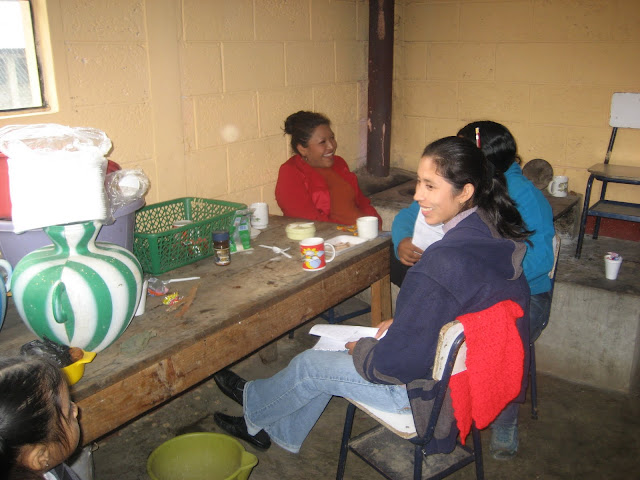 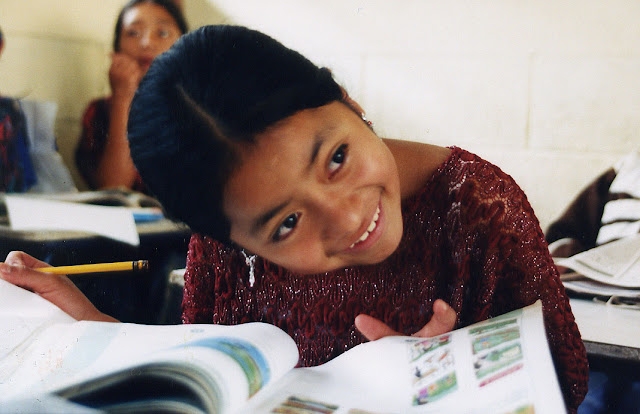 WOW!  Is about all we can say, especially if you remember the beginning.
Posted by Guatemalan Foundation at 10:51 PM