Vocational Education: "Learning With a Shovel"

In the beginning nobody knew anything much, including Cordell and his family, so this was one of the corner stones of the whole history from day 1--clear back to the beginning in 1967.  The following collage, or series of collages will give you the idea  of what it was about--every profit producing agro-business project becoming a learning and teaching laboratory.  In addition everything was in harmony with THE FIRST LAW:  "If you want to eat, you have to work!"

You see here the young men and the women in their respective  classes learning reading, writing and arithmetic, plus the principles of the Good Life:  Cleanliness, Nutrition, Healthy Homes, United Families, Education, How to Work, and Share with others.  The Vocational Students would have class study half of each day. Then work half a day in the agro-business projects on a rotation basis--one month in each category.  In a year they would usually know as much as the supervisor of each project. 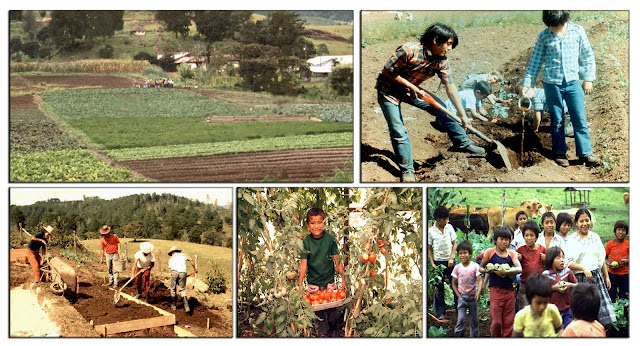 Was taught and worked in by the youth, and the children too and they all helped in the corn improvement project.

A native corn of the area called "veranero" was chosen as the one to improve as it was a yellow/red color and proven to be high in vitamin A already. It was also a small plant that didn't deplete the soil, and would produce a harvest in 4 months, rather than the 7-8 months for the native white corn with a gigantic stalk that only produced one ear per plant.  The average Indian harvest of the "veranero" corn was 50 pounds per "cuerda," a 9th of an acre.    Only 10% of the plants had more than 1 ear.
Initial seed was only from plants that had 2 ears.  From each crop seed was carefully chosen only from the plants with 2 or 3 ears per plant.  Eventually 80% of the plants produced 2, 3 and even 4 ears per plant. Then the selection was only from those ears that also were a uniform golden yellow--that was richer in vitamin A. By the end of the 6th year the improved corn was producing 695 pounds of corn per "cuerda," a nearly 1400% increase with also a vast improvement in quality.  On return to their home areas they knew how to improve their yields with the best variety from each area.

It began with a Honda diesel garden cultivator, that also had a power take-off and turned the hammer-mill that produced animal feed.  By 1970 the Foundation acquired for the Center a Ford Tractor with all essential implements.  Learning to drive it, and then work vehicles, was the main interest of all the students.  Above on the bottom left, and middle is seen Felix Rosales from the isolated Tanchi Village of San Pedro Carcha.  After being at the Center, along with two sisters, he returned to Tanchi and became the first full-time Kekchi missionary for the LDS Church. At last report he was an LDS Bishop.    On the bottom right is a terrible picture of the tractor years later and all beat up, but still working.  One student rolled it down the side of a mountain.  Another backed up to the edge of a river with the plow, but mistakenly put it in reverse and it plunged into the raging river that washed it downstream where it lodged against a rock with only the exhaust pipe above water like the periscope of a submarine.  Student divers finally got chains on it and a bulldozer pulled it out to undergo another overhaul. 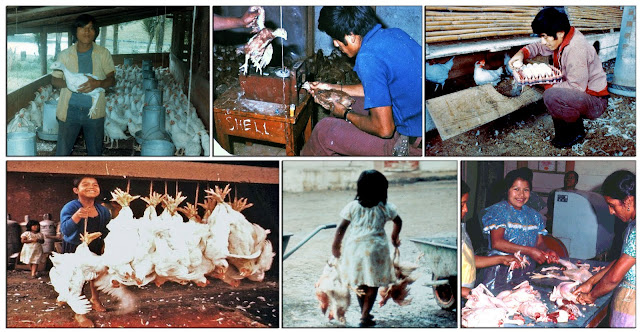 Poultry was the first business
of the Andersen's and in one degree or another continued for many years.  All male and female students participated in one phase or another. 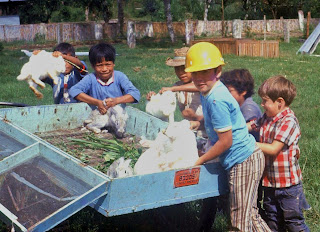 David and his little helpers astound the experts!
Above you see David and his helpers working with the rabbits that grew to as many as 400, but he started with laying hens.  He was only 8-1/2 years old when he took charge of 200 layers in cages.  With his  little helpers he would divide each 100 lb. bag of feed and hauled the 50 pound bags down to the chicken coop on his back.  He ended up  baffling the poultry experts in Guatemala when his 200 hens were averaging 220 eggs/day.  Cordell checked it out counting the eggs himself and sure enough it was true.  He investigated and found his son was giving a quadrupole dose of a vitamin/mineral supplement in their water, pushing them to lay like crazy until they finally wore themselves out.  David, along with the other sutdents, David also learned to manage the layers as a business, keeping the records and counting the receipts each day as you see below. 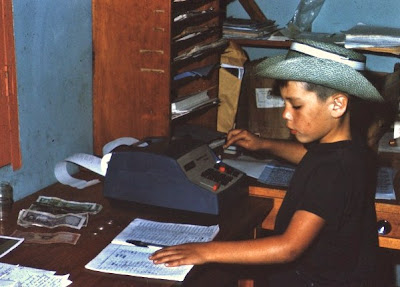 When Daniel Choc returned to his home in Patzicia
the Foundation loaned his family money to establish their broiler business you see below that helped support Daniel on his mission. 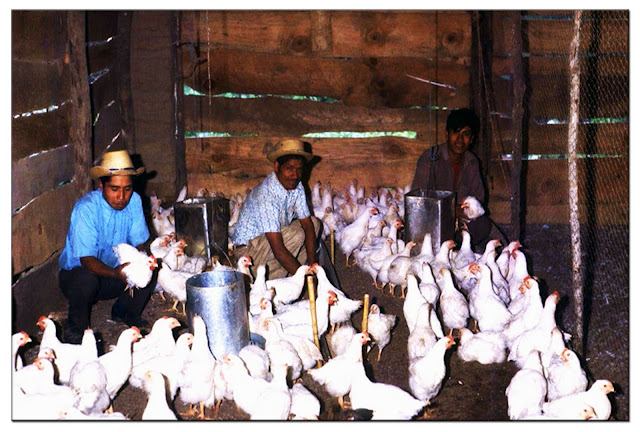 The cattle and dairy project.
Below are pictures of this mayor business and educational laboratory.
Miguel Angel, on the left, is branding a new Brown Swiss bull, part of a herd of 50 that was purchased with a loan from Toby Pingree.  A few years later the Victorias Dairy was established at Valparaiso and became the main profit producing project that employed many for 26 years. 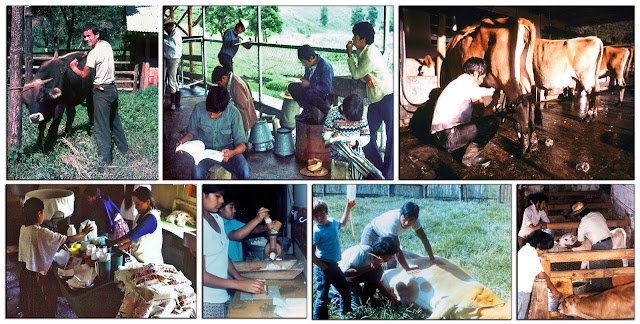 Above in the middle students are checking their manuals and notebooks in the class where they learned about  the cattle and dairy business.  During the year they each worked half a day for a month at the dairy milking the cows, and another month working inside processing the milk. Superior students were even taught how to check cows for pregnancy, and do artificial insemination.
The girls learned to process  the milk, bag it, make cheese, chocolate milk, and yogurt. The young men also took their turn raising calves, and working with the dry cows.  In the above photo, Miguel Max, the manager is teaching a couple of students how to give an I.V.  to a cow with milk fever.

They also learned to work with hogs. In all these photos you see scattered throughout the Andersen kids who "had to work if they wanted to eat," and they loved every minute of it.

Fishing in the two lakes that were created at Valparaiso, was both recreation, and a business.  Several times a year the lake level would be dropped and there would be a fish round-up and harvest. In addition a whole series of ponds were created where fish grew and reproduced fast, creating tons of small fish that were quickly processed as seen  below making a much more nutritious meal than just a fish filet--as skin, bones and everything but the intestines were used.
The women were taught to get full value from the small fish produced quickly in the ponds, by gutting, then grinding the whole fish. The resultant ground up fish was mixed with ground up corn, onions, etc. and eggs and fried  making extremely nutritious fish paties you see Alfonso enjoying below. 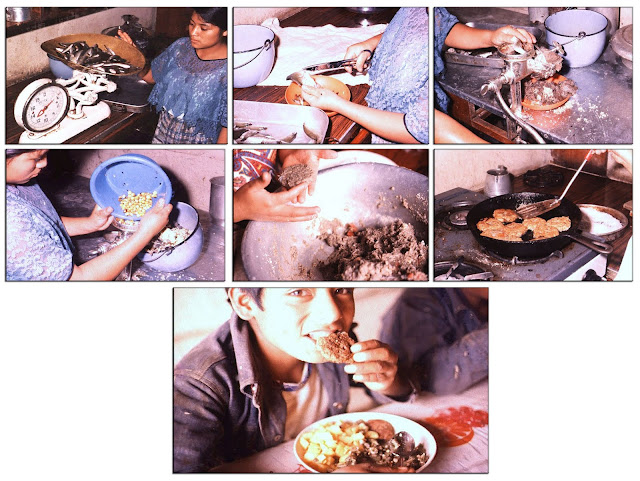 THE SHOP and CONSTRUCTION

All students would also take a month long turn working in the carpentry shop, participation in making furniture for nearby schools, and in construction projects such as the construction of a large water cistern that provided many homes with potable water.  Welding and car maintenance and repair were also part of the training. 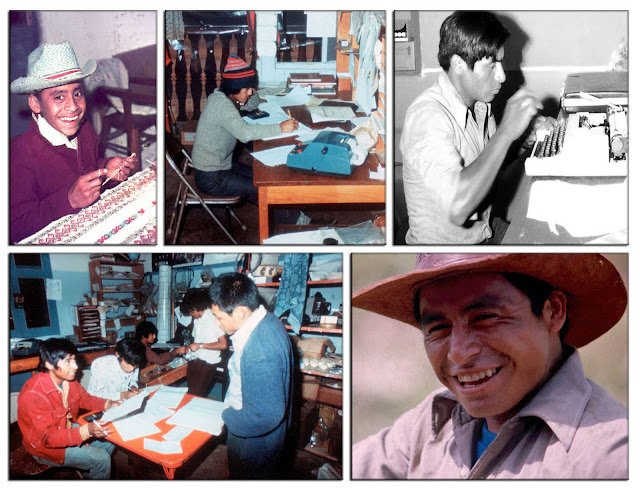 They all learned to keep records for the projects they participated in, which included simple accounting.  Miguel Max seen in the upper right typing, and in the lower left, paying the workers and students.  He became the first native from Valparaiso to become the Manager, and President of the Cooperative.   Carlos, in the upper left, came as a 11 year old barefoot boy along with his mother and two brothers (Moncho and Ruben). He learned every aspect of running a business and was the manager when the business was sold in 1993. 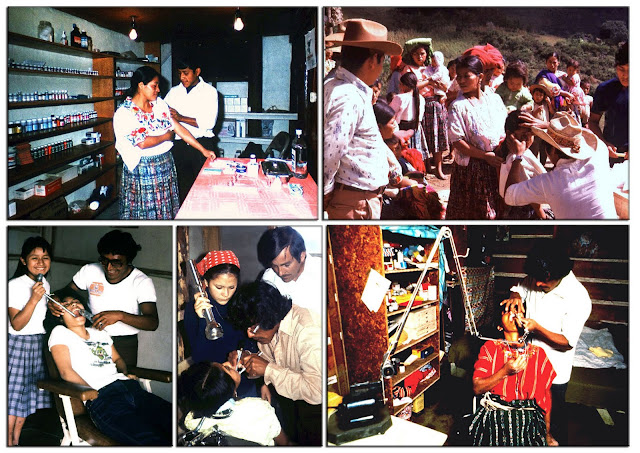 All the students learned the basics of diagnosing sickness and their treatment, but a few who showed special interest and talent were trained as para-medics, and in the lower pictures as a dental technician.  He is Miguel Ajpop, student from Patzun who learned to pull teeth, and  fill cavities from Dr. Harris Done.  Eventually we helped him set up a simple dental clinic in his Patzun home--from which he still supports himself and his family.

Recreation was also an important part of life at the Valparaiso Center for Indian Development. Next to swimming, soccer was the sport.  See the incredible success of the Valparaiso youth in winning the Soccer Championship of the area in 1980.  See it in the segment on THE CID.

Posted by Guatemalan Foundation at 12:12 AM