MUSEUM of the HOLY MAN

By Cordell M Andersen
Eventually on the Valparaiso Plantation in Guatemala's Alta Verapaz area, we cleared heavy underbrush from pasture areas, and then mowed it with the tractor.   This was astoundingly revealing, especially when a friend took me up to take aerial photographs.  The mowed pastures showed lumps and mounds where ancient homes and structures had existed. 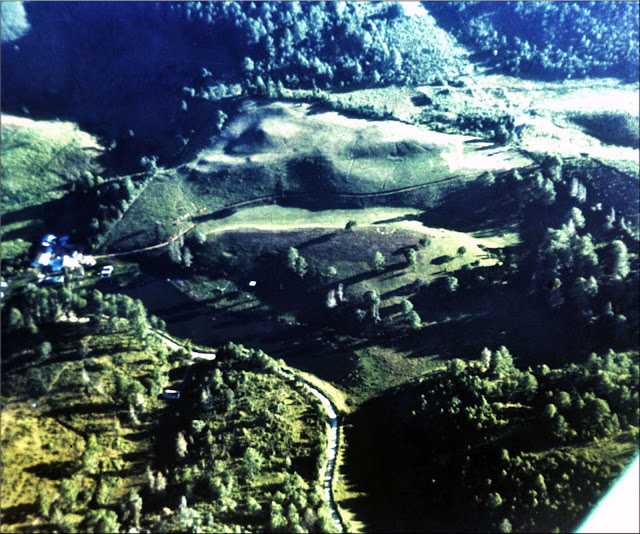 We couldn't cultivate an area for planting,  nor dig an outhouse hole, or ditch, without finding  broken pieces of pottery, and artifacts.  We began collecting the finds, and pinpointed other areas where there were mounds.


Then a couple of French archaeologists appeared with documents from the government authorizing them to dig a couple of test holes .  One of them was amidst the mounds in the aerial photographs.  Another was in another mound area you see below to the right.  Simple artifacts were taken to the National Archaeological Museum in Guatemala City.  The archaeologists estimated the dating of the ruins as early as 400 B.C. making them as much as 1,000 years older than the famous ruin of Tikal. 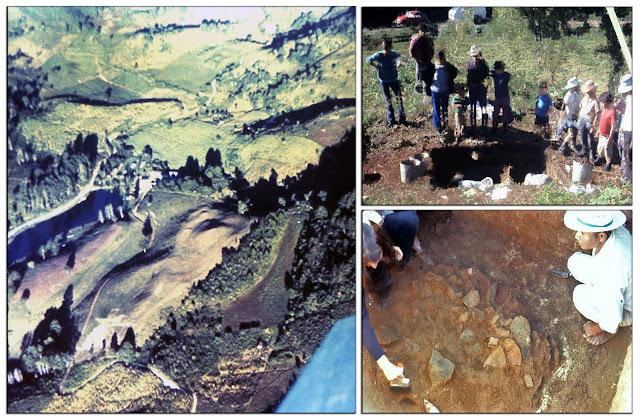 In the first collection of artifacts there was a male figurine with a pointed beard and what appeared to be a Biblical type headpiece.  Through an interpreter I interviewed the two oldest Indian males, reputedly both around or over 100 years old.  One of them told me told me that the male bearded artifact was a depiction of a bearded God/Creator who had appeared to his people anciently, healed their sick, taught them more effective methods of  agriculture and that they should love one another.  When he left, he promised that one day he would return.  This legendary divine personage was called by them Nahual Gwinak ("The Holy Man").


The other elderly Indian related that following the appearance of Nahual Gwinak his people had lived for several hundred years living in peace and love helping each other and  then went into decline and  darkness..


Eventually we put up a sign on the archaeological site where the above test hole  was dug, THE RUINS OF THE HOLY MAN--LAS RUINAS DE NAHUAL GWINAK.


Sadly that first 7 year collection of artifacts was never photographed, and  on return from our first trip to the U.S. the collection had been stolen from my office.


Over the ensuing years we continued collecting artifacts, keeping them under lock and key and eventually turned the living room into an archaeological museum you see below. 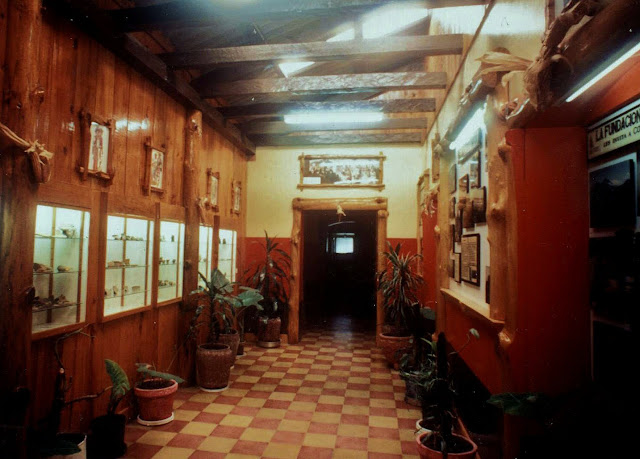 During all these first years we also became  well aware of old trenches on the property 15 to 20 feet wide, but silted in leaving only depressions of from 4 to 6 feet.  The entire outer perimeter of the plantation was such a trench.  Then here and there trenches took off from the perimeter leading into the property to other trenches.  One of them cut through the "Ruins of the Holy Man," making them hundreds of years newer than where the French archaeologists had dug.   The last rectangular trench area surrounded  our soccer field.


One night in 1979  there was a knock on the Central House door.  A tall, thin tourist,  his son, and father needed a place to park their mobile home.  He introduced himself as Rick Hauck, an archaeologist from Bountiful, Utah.  I guided them up into the soccer field.   They awoke the next morning surrounded by the very thing they were looking for.  He asked permission to explore the property, then a few days later wanted to talk.  You see him below with his father and son. 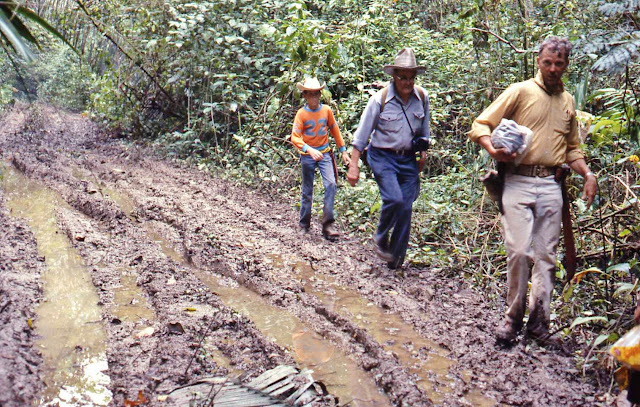 He asked, "Do you know  what you've got here at Valparaiso?"  I imagined him about to reveal either something awfully good, or like the whole plantation was on the verge of sinking out of sight in the world  biggest sink hole.  He answered his question, saying, "Valparaiso is an ancient fortified city!"  Of special interest to LDS people, he pulled out his BOOK OF MORMON and read from Alma 53 where what we had at Valparaiso was described.  That was the first of many visits, and some expeditions into more remote areas.  Below is a series of photos from one expedition into the northern jungles where we observed a tractor trench right through the middle of ruins by thieves that specialize in stealing and selling artifacts and also observed illegal exotic lumber operations--for years the two most lucrative economic activities of the area. 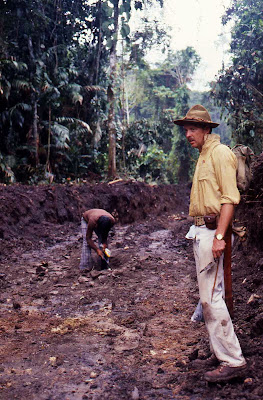 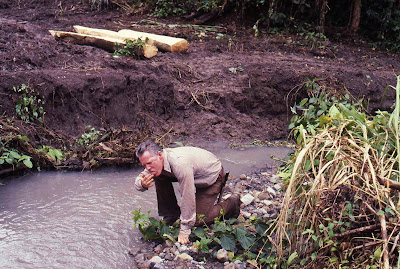 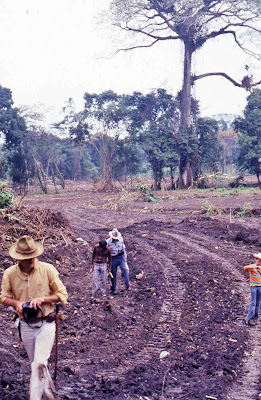 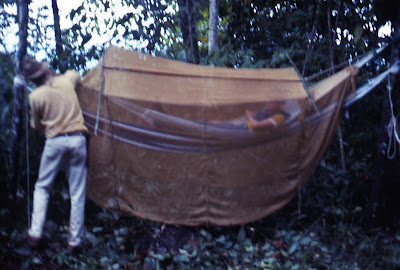 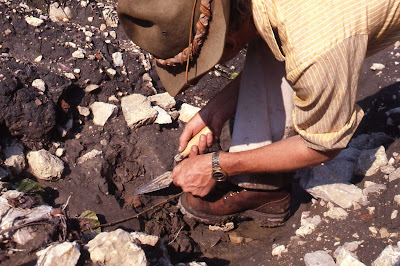 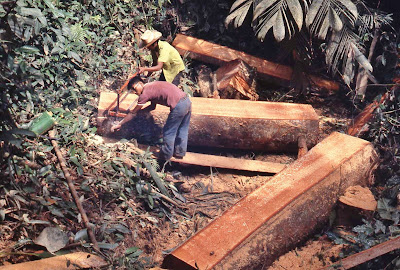 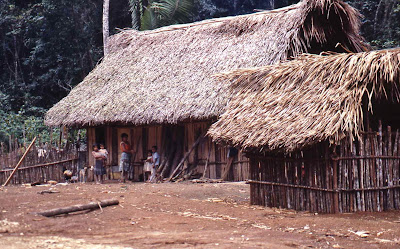 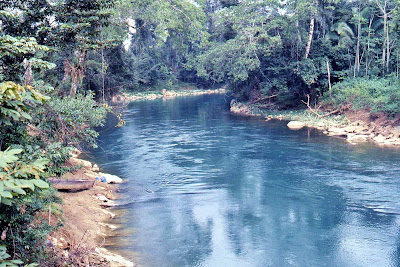 By 1993 conditions made necessary selling Valparaiso.  I took the artifacts with me, including a Mayan altar,  to our new farm we named, Farm of the Holy Man.  You see me and my guard dog, Goku, praying over the altar at the entrance to our home--where we established the "GREATEST Little Museum of the Holy Man" you see below.  Note the large picture depicting the Creator/God appearing in the Americas. 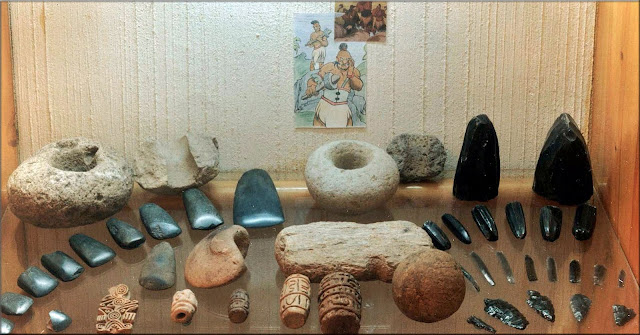 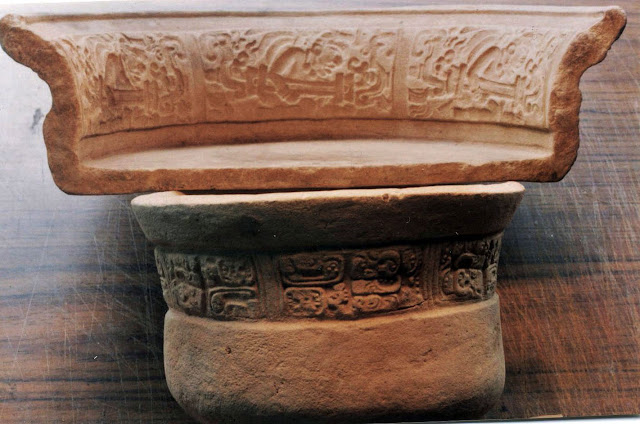 In 2002 we sold the Farm of the Holy Man, but packed up the artifacts carefully and put them in storage with my partner, Federico Veliz.  At the time of this writing in 2011, Rick Hauck, 32 years after his first visit,  is back in Guatemala with a full-time office in Salama, and soon will pick up the artifacts to study, photograph, and place them in a museum at the largest hotel in the area--The Park Hotel.


He also has permission from the present owners of Valparaiso to begin formal excavations.  We look forward to learning about all the exciting things that will be discovered and learned.  Rick and me are in agreement that if we ever win a big lottery, the first expenditure will be to buy and recover the Valparaiso Plantation--for several reasons, the mutual one being its archaeological value. My additional one will be to once again turn the property into a Center for Indian Development--The CID. 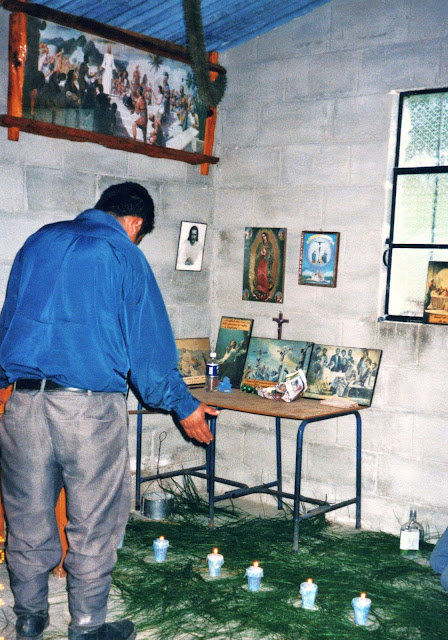 Our large picture of Christ appearing in the Americas, as described in the BOOK OF MORMON, was given to a Mayan Priest in Santa Cruz Verapaz, where you see it on the wall in his ritual room.  He accepts this depiction as representing the appearance of Nahual Gwinak among his people anciently, whose return they are expecting.  Fascinating to say the least.
Posted by Guatemalan Foundation at 11:05 PM