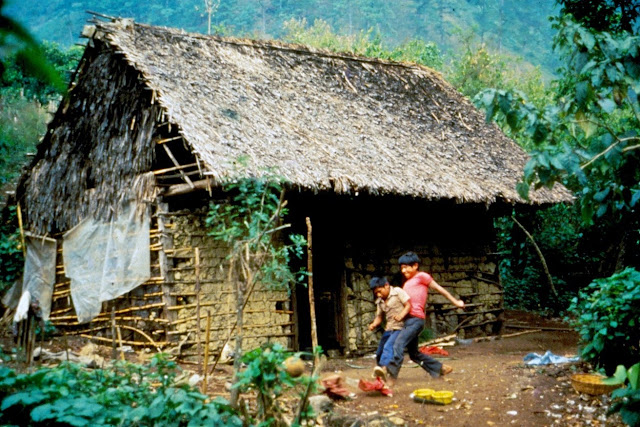 In the beginning at Valparaiso, February 1968, there were 39 families living in thatch huts scattered all over the 600 acre property.  They were not land owners, but were obligated to work two weeks a month at extremely low wages to be able to live on the property, plant corn and other crops on parcels of plantation land, get from the forests materials to build their homes, and firewood.  The property owner on the other hand was inhibited from using his property as he desired, but had to work around the family plots scattered randomly all over.  It would have been impossible too if he had of wanted to run a water or electric line to their homes.  Many changes were in order for the good of everybody. 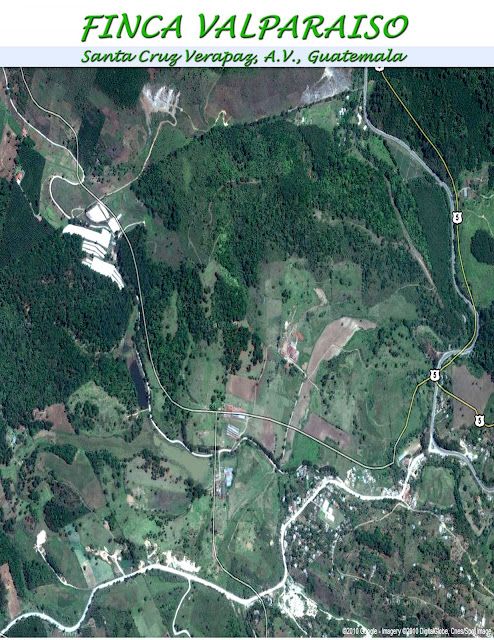 In the above Google Earth view of Valparaiso you can see how the problem was solved by gathering the people into their own community seen in the right bottom quadrant.  Below is a zoom-in shot of the of the Valparaiso Community formed in 1981. 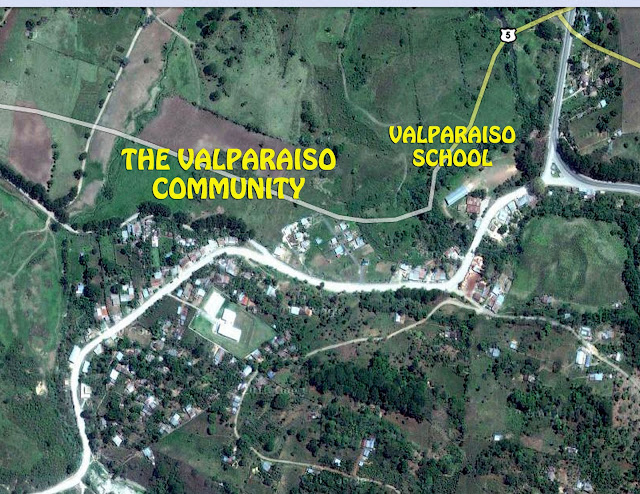 I personally  walked the area, measuring and staking out each family's property and legally separated the whole area from the plantation and presented to each of the original families the deed to their land.  I was rewarding them for being good workers and for their years of employment.   This was for the original families called "colonos," who for the most part had continued as part-time employees.


On the other hand, their children became the full-time employees, first going through a year in training and classified as students and part-time workers.  Most of them became full-time supervisors of each work project, and became teachers giving vocational training to students at the CID.  When the community was formed they were given the opportunity of owning their own piece of land and building their homes.  Their section of the community was a triangle to the north of the road you see above, each purchasing very inexpensively with low monthly payments about an acre of land each.  There was another section for them also up along the main highway on the east side a bit north of the School.

Among the original families there were by 1981 3 widows and they also were given a section of land and with Foundation help a home was built for each, one of them seen above on the right.  To help you all appreciate what was developing, remember how all the homes they lived in before--like the one you see on the left.
Additionally each of the "colono" families, as well as the full-time employees were given tin roofing material for the homes they would build.  Loans to be repaid at low interest were given to help each family construct healthy homes.

At the same time a water line was installed from the Central House area to the  community where a centrally located water tap was available for all as you see above on the left and middle.  Then the community got organized and installed water lines from there to each home.  Eventually, so they would each have adequate water and pressure, we helped them install their own potable water system from a large spring source way up the mountain past the Najquitob Village.

Here you see the community developing with typical small neighborhood stores cropping up along the highway and a barber shop as seen below to the right.  Eventually there was a repair shop--for car repairs and welding services, all skills learned in the vocational education program at the CID.  But, you might ask--where did the electricity come from?

The community organized and requested electric installation from the government agency--INDE.  They all had to contribute for the installation in each of their homes, but with full-time employment earning good wages they were able to do this.  The Foundation helped with some of the general expenses, then what was lacking was the electric meter for each of the more than 40 homes.  They had to be picked up in Zacapa, a round trip of about 240 miles.  The community leaders came to me and asked if they could borrow my Brazilian made GMC diesel pickup.  The driver would be Jose Caal who had worked for me for years.   Three of the community leaders went with him.


Then tragedy struck.  On  their way back with the meters in crates they went through a rain storm and on a blind curve an 18 wheelers came right at them. To avoid a head on and sure death, Jose drove off the road to the left and was airborne, peeled the bark off a thick tree and landed 15 feet below in a field with the result you see below. 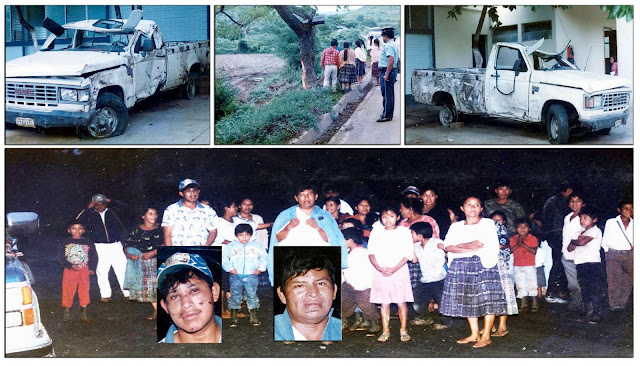 In the bottom  picture you see the families of those injured.  Jose, according to Guatemalan law went to jail, in spite of being badly injured.  Eventually we got him out and everybody back to the Valparaiso Community.  The truck was rebuilt but was never the same as you might imagine. This was the  truck I had purchased to replace the Toyota that had been car-jacked and never seen again in 1986.   My loss was Q.40,000 which back then was perhaps $15,000.  Somehow we eventually got electricity installed in the whole community making possible the stores having refrigerators, the shop with welding,  the homes with TV, and computers as you see below. 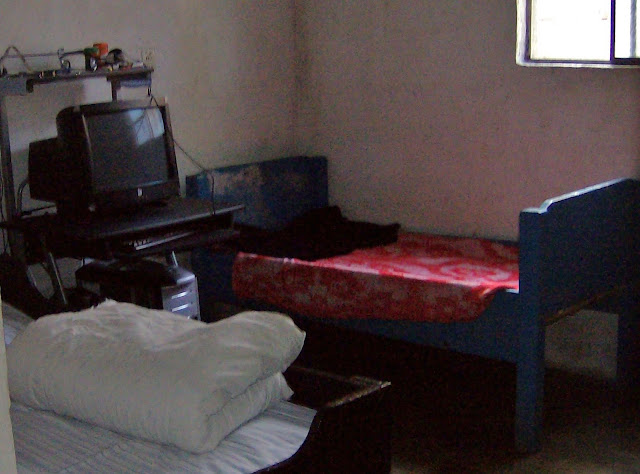 Then there was constructed a community hall you see below. 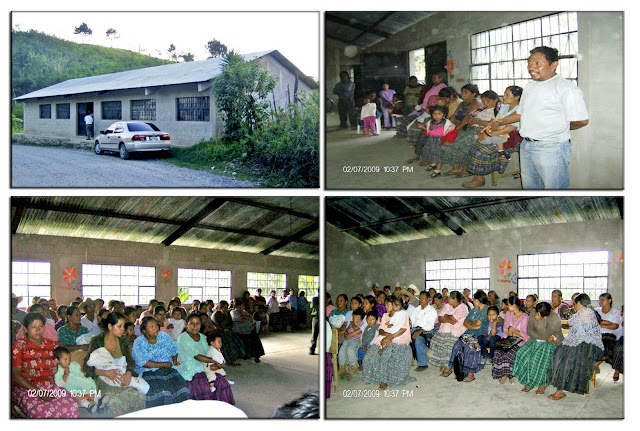 The community leader, Domingo Laj, and many of the members of the community who have come a long ways since the dark days of 1968.
Below is the new government  Health Clinic in the Community. 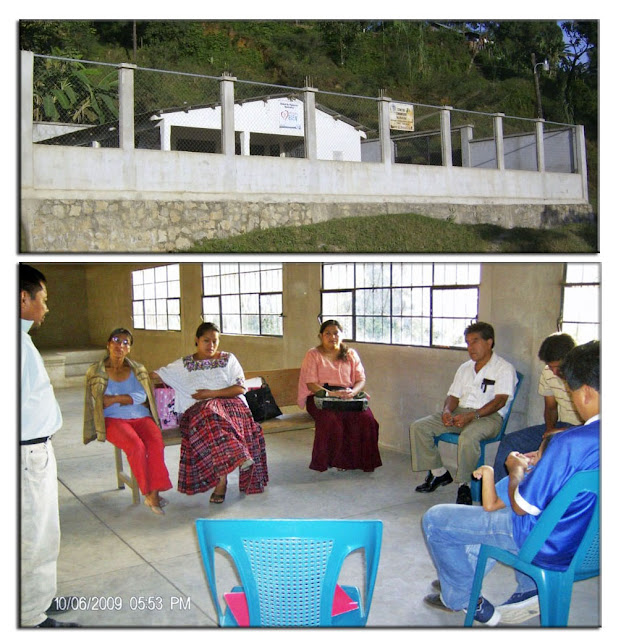 Above is the Improvement Committee in a meeting with Domingo Laj, to the left, and Federico Veliz as their advisor and Foundation representative.

Lic Ical.  Josefina works for the government as a nurse.  Lic, as mentioned in other segments, was the first professional graduate from Valparaiso as  a CPA.  Their son Byron recently returned from his LDS mission to the Nicaraguan Mission. I'll insert below a photo history of their Success Story:
Below we see again Lic and his brother, Alfonso, when they first arrived at the Central House.  Then 30 minutes later after a bath and some clean clothes.  Then years later receiving his diploma as a CPA. 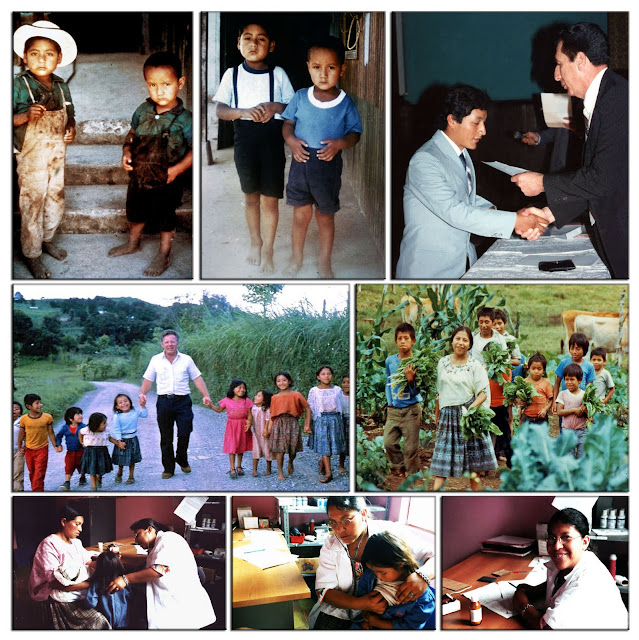 Then we see Josefina with me, she's on the extreme right in that picture. Then  working with children in the cooperative vegetable garden, and lastly working as a nurse in the government Health Clinic at the Najquitob Village.
In the community there are chapels of all 3 branches of Christianity:  Catholic, Protestant, and LDS.  Below is seen the LDS chapel complex that was built on property sold to the Church by 5 of the "colono" families who received their tract of land in 1981 when the community was established.  If you'll go back to the Google Earth views you can clearly see the chapel complex. 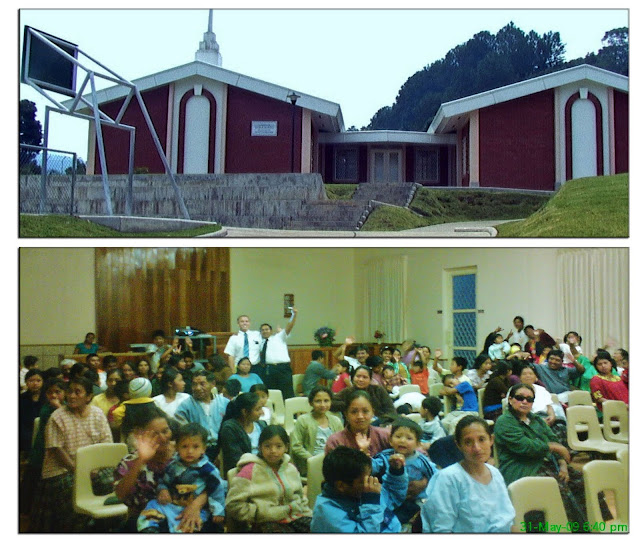 Above we see a community meeting held in the LDS Cultural Hall in which a photographic history of Valparaiso was projected.  Leaders of the new generation wanted to know more about their history and asked me to help them.  I put together a 43 page booklet containing hundreds of photographs giving them a summary of their history.  They got together those interested and used a digital projector to show it to the group.   I'll insert below the cover. 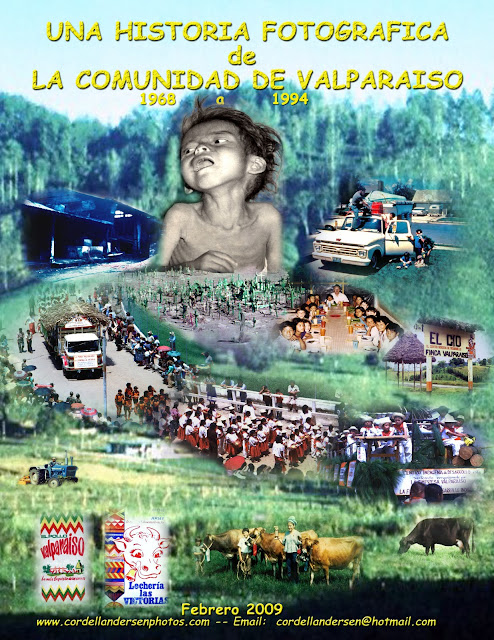 Last of all I insert a photograph they recently sent me of  more or less 60 LDS members who contracted a bus to take them to a Conference.  From the very beginning there have been 29 who have served missions of one kind or another from Valparaiso. 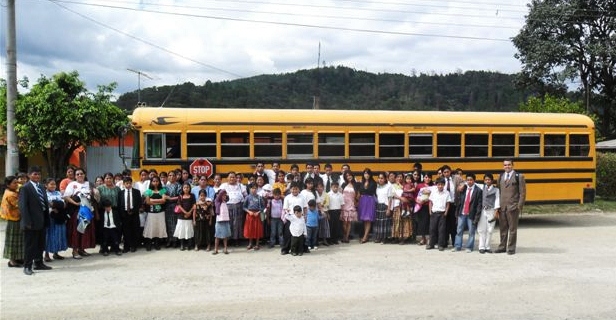 It is interesting, and very satisfying for the Andersen family to know that in almost every family in the  community there is either a father, or mother, and sometimes both, or grandparents who in the early years were quite literally saved from sure death.  Without the Foundation this group of people you see here, and nearly all the rest of the community wouldn't even exist.

Posted by Guatemalan Foundation at 10:52 PM