Other Schools and Community Projects

By Cordell M Andersen
The Foundation's commitment to education and community action is reflected over the years by the construction of schools, addition of  classrooms,  kitchens and sanitary facilities, and community meeting halls and health clinics--mostly, but not exclusively in rural village areas.
These projects are always paid for: First, by the community donating all it can in materials and labor;  Second, the Foundation helps the community request all the help it can get from the Municipal government and Ministry of Education;  Third, the Foundation donates what is lacking, usually about one third of the cost.  Each finished project becomes the property of the community and the government, and each is their responsibility to operate and maintain.
Some of the major projects have been covered separately, like:  The CID #1 (Center for Indian Development), The Valparaiso School, and Community, The Najquitob Village School, The Chulac and Polochic, The Patzicia School, the Ariel and Ines Andersen Chuluc Village School, and the Cunen Area.
Many more are pictured below, even though it is far from a complete list of them over more than 40 years:
We begin with the PAMBACH VILLAGE, of Santa Cruz Verapaz. 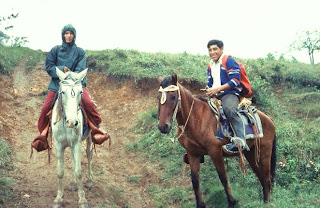 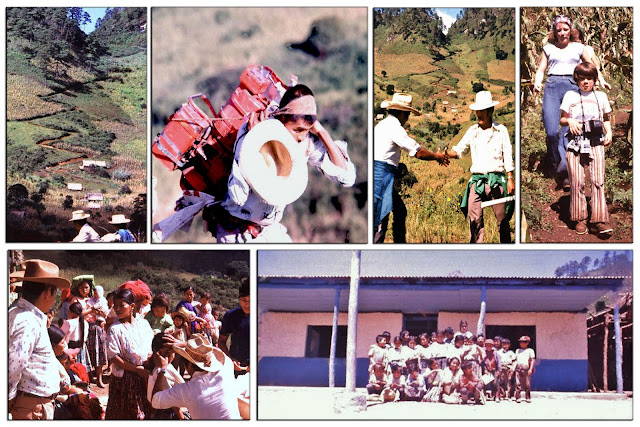 A book could and hopefully will be written about this epic history that spans now 36 years.
Two of our native health promoters sent on horseback to treat the sick in the mountains to the south of Valparaiso came down that zig-zag trail seen on the upper left and treated villagers. The villagers asked where they had come from and who sent them.  They learned about the Valparaiso CID and work done by a gringo Foundation.
A week later, led by the teacher in Pambach, Federico Veliz, a group of 35 hiked 3 hours to Valparaiso to ask our help to build their school.  A team of 4 from Valparaiso hiked to the village to check it out--carrying a 150 lb. generator, and a 16 mm. projector, showing the villagers a movie--their first. In the dark they incredibly returned to Valparaiso in time to report for work the next day.
The project was on with an agreement between our representative, Miguel Max, and Federico.  Teams of volunteers from Valparaiso began hiking the trails hauling building materials and helping them finish their simple school, you see above.
It was accomplished under death threats from the owner of the Pambach Plantation, who blocked a short route to the village.  He had previously barred  Health Department vaccination teams, and once stopped at gun point a Catholic priest traveling to the village to give a mass and locked him in storage shed for 2 days.
Then came the bloody intervention of the Guerrilla War, leaving 39 widows in the village.  After it ended we got very involved again helping the villagers actually become property owners, with deeds, and much more as you see below:

In the modern period we could finally drive up a very tough road through the breathtaking mountains to Pambach.  The school we helped build in the 70's is today just a skeleton.  Across the soccer field is the new school we helped them build.  The last picture, bottom right, you see the beginnings of our effort to help them build a school kitchen.
THE FIRST SCHOOL REBUILT AFTER THE 1976 KILLER EARTHQUAKE


At the same time we built the school in Pambach the 1976 earthquake devastated Guatemala.  To help we chose a village area near Patzun where help hadn't arrived. It was the SAQUIYA VILLAGE, of Patzun.

All the schools in the earthquake zone were destroyed, but we were impressed by the teachers and villagers who improvised a school you see above in the middle.  Then in cooperation with the people and the help of the Canadian embassy we together built a school which became the first in Guatemala to be constructed and functioning after the earthquake--a portion seen on the right.
A remote section of the Saquiya Village, called LAS MERCEDES,  became the center of Foundation efforts in the Central Highlands.  The Foundation purchased a property there and built a native style community center you see below.

I would spend every other week in the area with projects here at Las Mercedes, and also in Patzicia and Comalapa.  The Community Center was used for evening firesides and classes, and during the day for adult literacy classes.  We dug a well and established a potable water system for the area. For economic development we helped them organize themselves into a cooperative, with a store you see above, and eventually brought our strawberry project into the village with my partner, Dr. Carl Jacob.

Here you see Dr. Jacob, with son Juan Carlos having a free ride, teaching the Las Mercedes Cooperative how to produce strawberries. The Community Center was also my home away from home, my activities also involving treating the sick in the 3 areas mentioned. 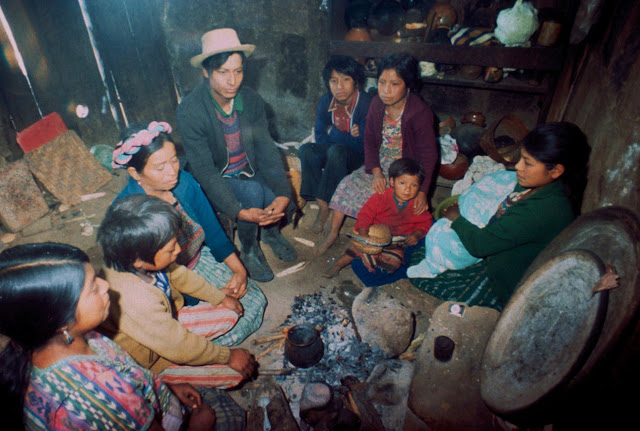 In PATZICIA we focused on helping several families that were not getting help like this one you see above, the family of one of our ex-students, Carmela Choc (on the right with a new baby in arms).  She was  Daniel's sister who had been such a special student as was Daniel.

In COMALAPA we worked through two of our CID students from there, and a great Guatemalan Indian leader, Raul Rodriquez you see in these photographs with his wife, and missionary friends from El salvador.
Sadly, as the country began recovering from the earthquake, the Guerrilla War heated up again, and extreme rightest clandestine groups looked on cooperatives as being communistic and dedicated themselves to eliminating the them.  Nine out of the 10 co-op directors and their families were massacred.  Raul escaped with his family and for years was in hiding in far northern Guatemala.

We helped construct quite a few HEALTH CLINICS and centers in  all our project areas.  Two of them are seen below.

On the left is seen a simple Health Clinic we helped them build in the Najquitob Village, at the same time we were helping them build their school.  Today, the village has a government built modern Health Clinic-we'll show you in the VALPRAISO CID Success Story.  On the right we are helping the Parrochoch build their Health Clinic.  This village is between Valparaiso and the town of Tactic along the highway to Guatemala City.  In front is their school which we also helped with in many phases of its development--one was building their sanitary facility with the first flush toilets in the area.
THE ZARAHEMLA SCHOOL you see below.

Here is the Zarahemla School, and a few of our student volunteers painting furniture for them.  This was one of our rare projects in Guatemala City.

MANY MORE PROJECTS TOO NUMEROUS TO DESCRIBE

Below are represented by two photographs many dozens and even hundreds of projects the Foundation sponsored.

On the left is a group of 8 very poor children I met when stopping to swim and refresh myself in Lake Coatepeque, El Salvador.  None of them were going to school.  I took them out to eat, and visited them in their homes talking to them and their parents.  We provided small amounts of money to get each of them in school and wrote letters back and forth--interspersed with a visit once in a while.  All of them graduated from elementary school, 6 of them went on to junior high and High School.  Two of them went on to study on the university level, one becoming a registered nurse, the other a secretary.
The picture on the right shows the children of the Xepatan Village school in the Central Highlands.  We provided them with new desks, as we did in many schools in both of our project areas.

Over the years we provided each area we worked in with a library as you see below.

On the left is the Junior High School in Santa Cruz Verapaz for which we provided pine trees cut into lumber by a local saw mill for the roof support, interior partitions, doors  and window frames.
Then the LIBRARIES, to the left-middle in CUNEN with students from the nearby school.  This actually began as an AYUDA Inc. project, but finished by the Foundation.  Next is the library attached to the Patzicia Junior High School.  On the far right is the Municipal Library in Santa Cruz Verapaz, 80% of the books and magazines provided by the Foundation.

It is located in the Santa Cruz Verapaz Municipality. Federico Veliz, our Regional Director for the Alta Verapaz region, and the Foundation helped transform the Acamal Village School into a model school in the area because of an innovative educational system and school facilities not found in other schools.  Prior to Federico's retirement the school was visited several times by the government's Minister of Education and foreign visitors from Israel, Taiwan,  Japan, and African countries.
The Foundation's contribution list at the school includes: 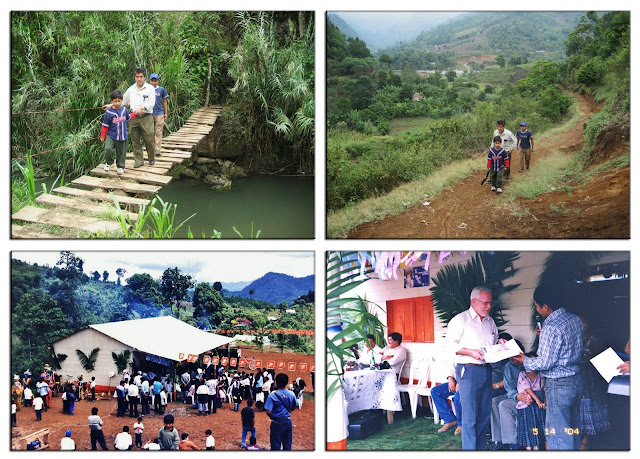 Federico is hiking to the Chilocom Village where he supervised the construction of a simple school.  The villagers built a kitchen, but needed something more appropriate for the school's needs.  So below we see the old, then the new kitchen.

Above the kitchen for the Chilocom Village School.

To the left is a simple school we helped the villagers build at the Chajkoxoj Village.  On the right I'm speaking at a simple ceremony to inaugurate the Chicoyoj Village School's new kitchen you see in the background.  Both of these are in Santa Cruz Verapaz.
Another school in the mountains above the Valparaiso CID is at the  Rosario Italy Village, where Federico supervised the construction of yet another school kitchen you see below, first in the upper right the old kitchen. 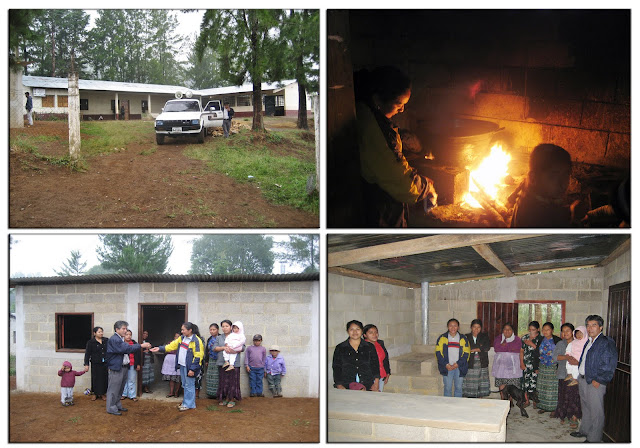 Below is another of the schools in Santa Cruz Verapaz where the Foundation has had many projects over the years, helping the villagers add on classrooms, providing educational materials and much more.  It is the Chixajau Village School where we see below Federico speaking to the students.

One of the newest schools in Santa Cruz is at the Laguneta Village you see below.  The people are very poor, but provided all they could.  We doubled that and built a simple school that you see was done quite cheaply--with bamboo walls, covered by card board inside, and with a dirt floor.

So the Laguneta Village, the poorest of the poor, also now has their school, thanks to Federico and the Foundation.
They now have the essentials and classes have begun for the children, and in the afternoons there is an adult literacy class attended mostly by the women. Then Federico talked to them about the need of a sanitary facility, or outhouse.  The men and boys dug the hole and Federico provided the tin roofing and the floor and two hole seat the boys are unloading and taking out back to install.

FEDERICO and the FOUNDATION COVER A HUGE ISOLATED AREA

Federico and the Foundation take care of a very large rural area.  Part of it is the 3,000 foot deep Chixoy Canyon where there are isolated villages.  Below Federico is making the trip on horseback to one of them that requested our help.

The trail descends down into very hot desert like country.  Here he is arriving at the Carchela Village where their school's roof was damaged by a hurricane.  We sent tin roofing.  We also provide this school of several hundred students with educational materials, and a sackful of all-day-suckers!

Posted by Guatemalan Foundation at 10:29 AM